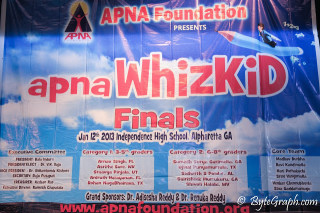 APNA Foundation was started by Andhra Pradesh physicians and professionals of North America to promote charitable activities, in educational, scientific, cultural, healthcare, and other focus areas. Many projects have helped needy and meritorious children in India, but APNA has been asked to help meritorious students in the USA also.

Under the chairmanship of Shri Adisesha Reddy, President Bala Indurti, and other dedicated leaders, APNA WhizKid competitions were begun, to help identify the “whiz kids” of Indian origin in America. Top students (in Category 1: grades 3 through 5, and Category 2: grades 6 through 8) are selected on merit and provided with scholarships.

The preliminary competition was held in November in 14 locations across the USA. From several hundred participants, the top five from each category were selected for the finals on Saturday, January 12th, 2013. 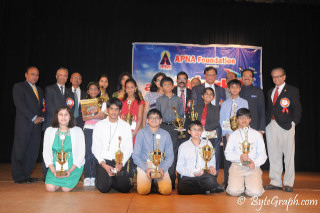 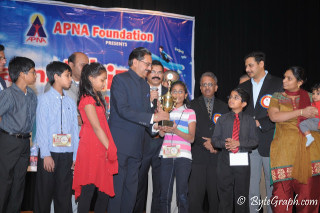 His Excellency, Shri Ajit Kumar, Consul General of India, was the chief guest for the finals evening filled with dazzling quiz competition, musical entertainment, and above all, an inspiring display of sportsman-like spirit. In his dignified way, Shri Ajit Kumar shared that though attending cultural events is a part of his busy lifestyle, charitable events such as the APNA Whizkid will always retain a special place in heart. It was touching to note that in spite of his busy schedule, Shri Ajit Kumar took the time to select and personally bring a special set of books to be awarded to the finalists. 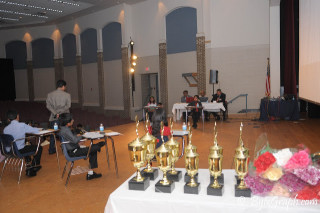 Madhav Durbha and Hari Pothukuchi hosted the nail-biting finals, which saw a keenly fought nerve-wracking finish. There were 25 questions for each category, with 5 questions each from Science, Math, Vocabulary, India, and Social Studies. All were multiple-choice timed questions, and the audience was warmly surprised to see that time was not a constraint to the contestants. It was also interesting to note that the ten finalists had only one contestant from the host city of Atlanta. Category 2 competitions saw a tie for the third place requiring an extra round of 10 tie-breaker questions.

The audience was also regaled by an enjoyable musical interlude of numerous songs, conducted by Venkat Chennubotla with his team of Phani, Ram, Sneha, Bhanu, and Keerthana. 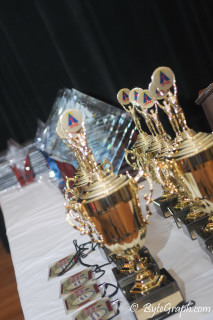 Apoorva Gangavelli of Suwanee, GA, was also recognized for scoring a perfect 2400 in the SAT. He is from North Gwinnett High School. 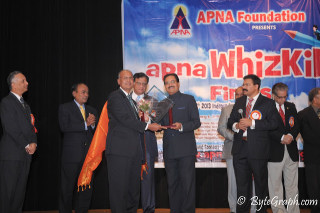 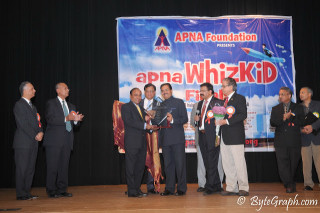 In an evening which demonstrated the brilliant acumen of the young contestants and inspiring speeches from leaders, three Lifetime Achievement Awards were presented:
• The late Dr. P.V. Rao garu, a father figure to Atlantans and an eminently respectable leader in the USA and India,
• Dr. Narasimhulu Neela garu, (above left)
• Mr. Narender Reddy garu (above right). 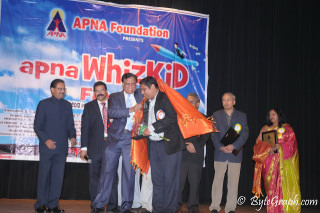 Mr. Phani Dokka (left) accepted the award on behalf of the late Dr P.V. Rao garu. One of the highlights of the evening was the soul stirring eulogy from Phani for Dr. Rao. Not a dry eye was in the audience after the moving tribute of praise and respect.

It was a privilege to see Ms. Jyothi Reddy (also in the photo on the left) in the audience, who had come from Phoenix, Arizona to lend her support to this event. A success story, she had risen from a daily agricultural laborer to CEO of a multimillion dollar company. 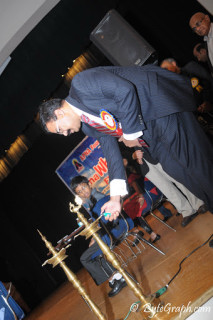 At the end of the program, President Bala Indurti (who appears in the photo at right) shared his resolve to let new blood infuse into APNA leadership after being at the helm for five years. Thunderous applause reflected the support and goodwill that the leader enjoyed.