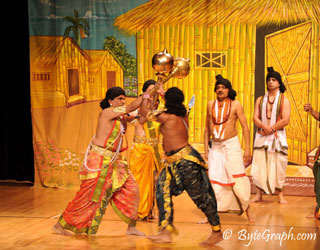 Chinmaya Mission Alpharetta (CMA) presented the drama “Arjuna” at the Clayton County Performing Arts Center on Sunday March 26 th. After their previous hits (Ramayana, Chanakya, Adi Sankaracharya, etc.), this show was sold out, with about 1250 people in the audience.

In only two hours, excerpts from the life of the hero of the Mahabharata were portrayed, from Dritarashtra sending the Pandavas and Kauravas away to Gurukul with Drona acharya. through student days, competitiveness, winning over Draupadi, Krishna reminding the Pandavas of their duty, Arjuna’s penance, proposing to Krishna’s sister Subadhra, to the end of the war of Kurukshetra and Arjuna showing his devotion to Lord Krishna. The story line was maintained through narration by Maharshi Vyas, author of the Mahabharata.

Several special effects were noteworthy: the bird shot from the tree by Arjuna during target practice, fish shot by Arjuna during the swayamvara. As described in the Mahabharata, Arjuna’s chariot, driven by Lord Krishna, had 2 wheels and 4 white horses; whereas Bhishma’s chariot had 4 wheels and 2 horses—and they were on the stage, complete down to the Hanuman dhwaja on Arjuna’s chariot! And the divine virat roop that is scary to look at and at the same time invokes devotion. Many special touches made the show a treat for the eyes. The subtle background score and special sound effects were also appreciated.

Realistic settings, appropriate props and colorful costumes added to the glitter of the show tremendously. An eye for detail was evident in the 500+ pieces of costume and 200+ pieces of settings items. The production quality of the show was very high with minimal time for scene changes, with most of them being 20-30 seconds.

Syam Yellamraju directed 49 artists from 5 year olds to 50+ year young, and 40 other workers, all committing 10 months of preparation for the show. Through funny moments in the script, the outstanding child artists wonderfully carried the show forward, and adult actors did extremely well in diverse scenes demanding humor, valor of fights (bows, gada, swords, spears, wrestling etc.), romantic moments, family drama and all. The show was a fund raiser for development of the CMA Ashram in Johns Creek, and a success in more ways than one.