COVID-19  In-depth info for Indians in Atlanta/Georgia. Click here
Home > Magazine > Around Town > “Arpan: An Offering” – Tryst with the Elements

“Arpan: An Offering” – Tryst with the Elements 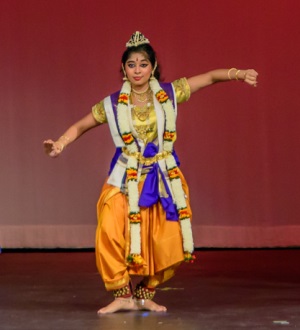 “Arpan: An Offering,” the pageant of terpsichorean delights that makes its all too infrequent appearances before the audiences in Atlanta, was back again at the Lanier High School Theater on September 2, 2017, after a caesura of exactly 2 years. Needless to say, as always this cultural extravaganza organized by Savitha Vishwanathan and her students at the Nritya Sankalpa Dance Academy captivated an appreciative audience with the aesthetic perfection and flawless execution of every item in its repertoire.

“Pushpanjali,” or the offering of flowers. (Photo: Shekar Narayanan)

The invocatory piece, “Pushpanjali,” or the offering of flowers (which more or less adorns the place of the alarippu or blossoming of the traditional Bharatanatyam margam) was a piece set in the somewhat rarely used audava (5-note) raga Vijayavasantham. It was composed by Madurai R. Muralidharan and choreographed by one of Savitha’s senior students. This was an excellent choice for an invocatory piece since it lent itself well to the pure dance sequences (korvais) that characterize the alarippu, and Savitha’s young students performed this exceptionally well, with a sense of rhythm that was well beyond their tender years.

The “Pushpanjali” was followed by the classic ​jatiswaram in Kalyani composed by Ponnaiah Pillai of the famed Tanjore Quartet, and choreographed by Minakshisundaram Pillai, the doyen of the Pandanallur style of Bharatanatyam. This piece, with its rhythmic patterns that become increasingly complex as the dance progresses, was performed with incredible verve and élan by Savitha’s students. 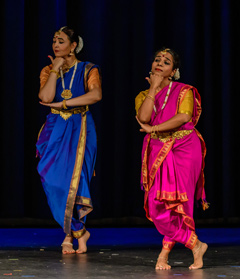 There was a break from the traditional margam at this point; the javali, which is usually performed towards the end of the Bharatanatyam performance, was performed next after the jatiswaram. The piece selected for the javali was the eternally delightful “Era ra ra” composed by Dharmapuri Subbarayar in Kamas, and choreographed by Smt. Rukmini Devi Arundale. This piece was performed with great enthusiasm by Savitha’s adult students who showed great glee in interpreting the colloquial content of this racy piece through the medium of dance!

The javali was followed by what was undeniably the pièce de résistance of the evening’s performance, an audio-visual pageant that paid homage to Shiva in the form of the panchabhutas or the five elements that lie at the core of existence. Each of these elements is worshipped as a bhuta linga at a South Indian temple (four in Tamil Nadu and one in Andhra Pradesh). “Panchabhuta Kritis: The Five Elements” was a masterly production that fully exploited the entire spectrum of audio-visual appurtenances to dance (projection, narration, lighting, sounds, and music to name a few) and created an incredibly awe inspiring spectacle! The entire piece was based on the panchabhuta kritis composed by Muthuswami Dikshitar, and sung by Bombay Jayashri.

“Ananda Natana Prakasham” in Kedaram paid homage to Shiva as akasha (space or ether, enshrined in Chidambaram) and “Sri Kalahastisha” in Huseni worshipped Shiva as vayu (wind, enshrined at Kalahasti). 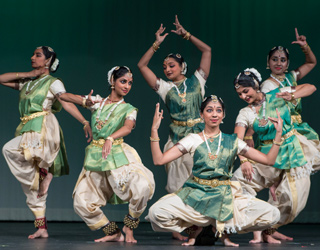 Shiva as agni (fire, at Tiruavannamalai) was extolled by the Saranga composition “Arunachalanatha,” as jala (water, at Jamkukeshwar) by “Jambupathey Maam Pahi” in Yamuna Kalyani, and as prithvi (earth, enshrined at Kanchipuram) by “Chintayamam” in Bhairavi. Four of these dances were composed by Savitha Vishwanathan and one by Padmashri Leela Samson (modified by Savitha Vishwanathan). This was a truly memorable piece, performed with incredible grace and skill by Savitha’s older students, who gave visual form on stage to these five incorporeal elements.

“Mathe malayadhwaja,” a daru varnam in Kamas composed by Muthaiah Bhagavathar and choreographed and performed by Savitha’s senior students, was the next piece. They interpreted this varnam in evocatively sculpted sequences to portray the role played by women as strong maternal figures, wise teachers, creative artists, and courageous leaders. This varnam was followed by Ambujam Krishna’s delightful keertanam “Adinaye Kanna” in Mohana Kalyani, choreographed by Savitha Vishwanathan and performed by her adult students. Veenai Krishnamachariar’s thillana in Natabhairavi followed, and this extremely lively and fast-paced composition with its exuberant sequences of pure nritta was performed with unbounded vitality by Savitha’s older students. The conclusion of the evening’s performance showed again Savitha’s willingness to break with tradition: instead of the usual mangalam, what followed was an interpretation of the song “Vellai Pookkal” from the film Kannathil Muthamittal, composed by A. R. Rahman, and choreographed by Savitha’s older students for the younger ones. This dance, which brought a message of worldwide peace and unity was extremely relevant in the current socio-political climate, and provided a fitting end to a wonderful evening!

Every “Arpan” performance enriches the community in ways that go far beyond the aesthetic; the proceeds from each of these performances go to support a worthy charity. This year’s event was no exception; the money raised benefits the Malala Fund, which seeks to empower girls by working to ensure that they get twelve years of free, safe, and quality education, and Behavior Momentum India (BMI) which provides personalized intervention services for children with special needs in India. Let us hope that Nritya Sankalpa’s yeoman service in benefitting the community at large continues unabated, while their chosen aesthetic medium continues to gladden our hearts!

About Arpan:
Debuted in 2006.
The show is designed and executed entirely by the students to benefit 2 charities of their choice.
https://www.facebook.com/Nritya-Sankalpa-217888314889772/

About Malala Fund:
Malala Yousafzai is a Pakistani student and education activist who began speaking out for girls’ education at the age of 11. After surviving an assassination attempt by the Taliban at 15, she co-founded Malala Fund with her father Ziauddin. She is the youngest ever Nobel Laureate. Malala currently lives in the U.K. with her family. Founded in 2014, Malala Fund champions every girl’s right to 12 years of free, safe, quality education. We believe girls are the best investment in the future peace and prosperity of our world. (https://www.malala.org/)

About Behavior Momentum India
Behavior Momentum India's mission is to provide Optimum Learning Opportunities to children and individuals with autism, to achieve self –sufficiency & an improved Quality of Life by implementing cutting – edge empirically tested methods of Applied Behavior Analysis. BMI started as a parents initiative, when few parents with children on Autism Spectrum Disorder (ASD) approached Ms. Smita Awasthi BCBA to spearhead an intensive ABA based intervention centre, in India. Smita Awasthi was an NRI and frequently visited India for consultations to assist parents in Kolkata, Delhi, Lucknow, Mumbai, Bangalore and hold workshops on invitations from various NGO’s. ABA intervention was being understood as a positive intervention to train children with Autism Spectrum Disorder. She was the first person in India with all professional qualifications having studied ABA, and immense practical experience in the application of ABA. She finally shifted her base to India and formed BMI.

BMI set up its first intervention centre at Bangalore in 2010. The model followed at BMI was to have one trainer per child and included intensive training of 25 hours per week as per international bench mark. Technology transfer included supervision and constant training as per global standards. (http://behaviormomentum.com/)