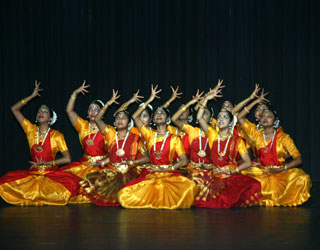 Five years after its debut in 2006, Arpan: an Offering, by Savitha Viswanathan’s Nritya Sankalpa Dance Academy, was back again in Atlanta on June 25, 2011. The venue was the North Gwinnett High School theater in Suwanee.

In line with tradition, the program began with the traditional invocatory piece, albeit with a difference: in place of the customary kouthuvam, the invocation took the form of the Shiva Panchakshara Stotra, said to be authored by the great philosopher Adi Shankara. In this stotra, each of the five syllables that comprise the popular shiva mantra from the Krishna Yajurveda, na-ma-shi-va-ya, is expounded upon to delineate a different attribute of Shiva, the cosmic dancer. Set to music by the late Kadayanallur Venkataraman, this piece was performed by the senior students of Nritya Sankalpa.

The stotra was followed by Nritta Arpanam, an abstract presentation where the rhythms and phrases of the music (composed by Sri Lalgudi Jayaraman for the movie Sringaram) were translated into patterns of the body, lines in space and time. Next, Unaroo Bharatame, a semi-classical piece in Malayalam, extolled both the classical and folk arts of Kerala within the larger tapestry of the Indian cultural heritage. This was followed by Acham Acham Illai, the legendary song of emancipation from the poet-philosopher Subramania Bharati: the younger dancers captivated the audience with this piece, with its music from the soundtrack of the movie Indira.

The last piece in this segment was a unique interpretation of what constitutes the id—that inaccessible part of our personality which is dominated by instincts and emotions. Titled Vyaktitva, this piece explored the different emotions that make up the human entity, both in isolation and in totality. This remarkable piece was noteworthy for another reason, too: it was conceptualized, choreographed, and performed entirely by the senior students of Nritya Sankalpa.

The second segment featured guest artists in Krishna Bharatam, a unique dance drama by Sheejith Krishna, a dancer from Kalakshetra. Daring and innovative both in content and in form, Krishna Bharatam explores the complex blend of the divine and mundane, the philosopher and the realist, the reformer and the preserver, and the pacifist and the warrior that is Krishna. In a series of six vignettes that carried the audience through the epic Mahabharata, from the Draupadi Swayamvara to the revealing of the Bhagavadgita, Sheejith presented different faces of Krishna: now a silent witness, now a political agent, anon a succorer of the oppressed, then again a strategist in war, and so on. One of the scenes showing Krishna as an ambassador in the Kaurava court on behalf of the Pandavas was executed in the Kathakali style, down to the music which consisted of the padams from the Doothu scene of Duryodhanavadham, a popular Kathakali play. This bore witness to Sheejith’s mastery in integrating different styles of dance and his avant-garde approach towards experimenting with form. Although Krishna Bharatam was originally intended to be a solo performance it was modified to include two other exemplary dancers, Paulomi Pandit and Anupama Aranaprasad from the Rangashree Dances of India (California) who accompanied Sheejith with impeccable style and grace.

The proceeds from this performance benefited Children’s Healthcare of Atlanta.