Asian-American media are seen at the Georgia Capitol 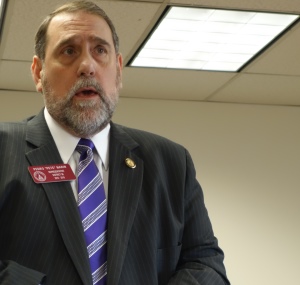 On a bright weekday morning, January 29, 2015, I took a MARTA train from the rising sun in the east of metro Atlanta towards the shining gold dome of the Georgia capitol building--through the multiple neighborhoods with their varied architecture and atmospheres to the largely black and white downtown, where a group of Asian Americans were gathering, most representing the northeast corridor (Korean, Vietnamese, Chinese populations) and the northern side of Atlanta (Indian Americans and South Asians of newer developments as well as spread out everywhere in gas stations, hotels, and shops). 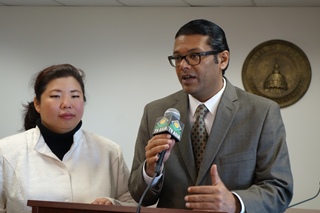 Political consultant Farooq Mughal of the Georgia AAPI Legislative Taskforce organized the meeting and attorney Bonnie Youn coordinated, not only as an opportunity for media reps to meet each other and forge connections, but very importantly, an opportunity to bring the attention of the legislators in the state capitol to the ethnic communities that they also serve and “making sure,” as Marin said, that “our local government really understands our diverse communities.”

Farooq Mughal spoke of the role of the AAPI media in overturning the conviction in 1983 of Fred Korematsu, a civil rights hero who objected to Japanese-Americans being placed in incarceration camps during World War II. This media event at the Capitol was timed to coincide with Fred Korematsu Day.  Bonnie Youn also spoke of the plight of undocumented students striving to better themselves and care for their families by attending college, getting drivers licenses, and working legally.

Guest speaker Secretary of State Brian Kemp described the latest work of his office, including elections (he is working to bring the “SEC Primary” to Georgia in 2016) and corporate licensing (bringing businesses to the area, such as Mercedes, Kia, Porsche, NCR, and the Pinewood Studios which have brought the infrastructure as well as the filming of movies to the area—a great foundation for the movie industry in Georgia for the next decade). 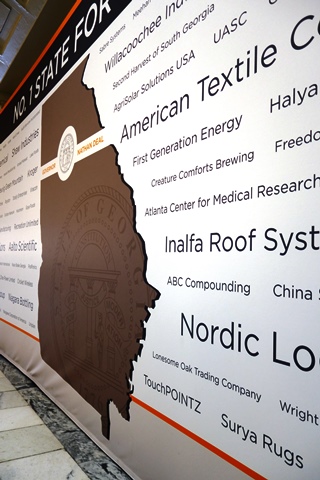 Under the gold dome of the capitol building, a display of Georgia businesses includes Surya Rugs. (Photo: Suzanne Sen)

On the side of the great staircase, where Governor Deal came out to meet the gathering, receive issues of the various publications, and pose for a photo, a huge banner of businesses in Georgia included one business that was recognizably Asian American: Surya Rugs. Suniva, and how many others, did not seem to be there.

And upstairs in one particular display case, Asian Americans were also visible (to this media group) in their absence: amongst the display cases on Georgia history, one case spoke of Diversity under the gold dome: women, African-Americans, and the first Latino rep, Pedro Marin himself, seen in a clipping from a Spanish language paper of 2003—but not yet any mention of other ethnic citizens. As more and more Asian Americans enter the legal and political arena and reflect the demographics of America as it changes to minority majority, perhaps the display will soon feature the addition of the first AAPI to represent that population here, hopefully with a photo alongside Pedro Marin’s, honoring his support. 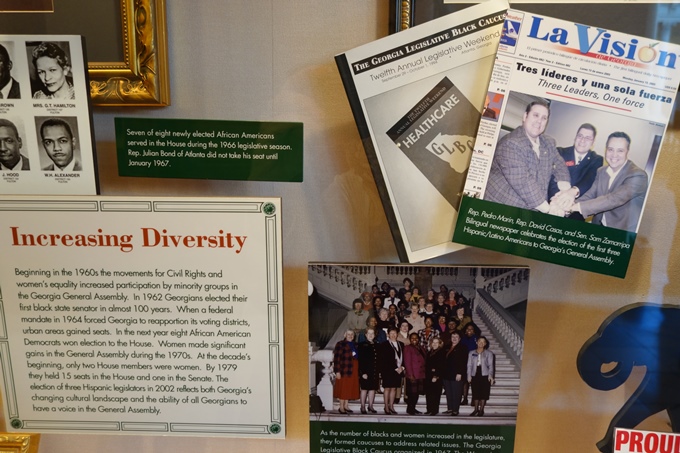 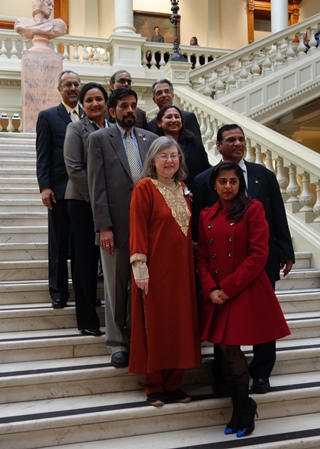 The Indian-American media contingent at the capitol. (Photo: taken by a student on a school trip to the Capitol, for Suzanne Sen)