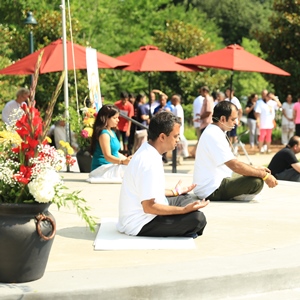 It was quite a scene! At 9 am on Sunday, June 21, 2015, in Sandy Springs, metro Atlanta, an approximately 1000-strong crowd was madly excited, wearing hearts on sleeves, very proud of the yoga heritage, and displaying their pride fittingly enough at a place called Heritage Park! The yoga aficionados practiced yoga exercises on a hot sunny day, literally sweating it out. It was the International Day of Yoga, an event so consummately planned by Prime Minister Narendra Modi.

Anyone interested in human wellbeing and robust physical and mental health could not but feel the optimism of Atlanta’s IDY occasion. Imaginative plans were implemented the world over by Indian Consulates. It was a reflection of the rising public awareness of the potential of yoga for promoting wellness and health. Practitioners know for a fact that yoga promises robust physical and mental health and delivers it diligently to whosoever practices it regularly. 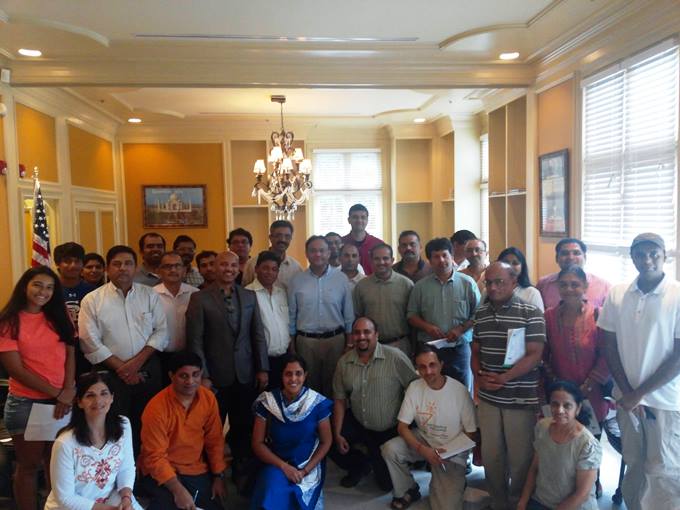 The team of volunteers that made IDY not only possible in Atlanta but a great success – posing with Consul General Nagesh Singh.

About 300+ volunteers representing a magnificent array of forty organizations joined hands under the proficient leadership of the Consulate General of India, and in particular Messrs. R. Srinivasan, Anil Kumar, and Timothy Jetty. Consul General Nagesh Singh, who joined the Consulate in June 2015, heartily contributed to the IDY efforts. He lit the lamp of knowledge at the inauguration along with Mr. Rusty Paul, the Mayor of Sandy Springs. They both greeted the large audience, Mr. Singh first, with inspiring words. The AYUSH (for Ayurveda, Yoga, Unani, Siddha, and Homeopathy) Ministry, New Delhi provided in advance the mandatory Common Yoga Protocol to be followed for IDY. The protocol would ensure a modicum of uniformity in celebrations around the world, with some 190 countries celebrating IDY. This is an informative document and is freely available to all at www.IDYatlanta.org. 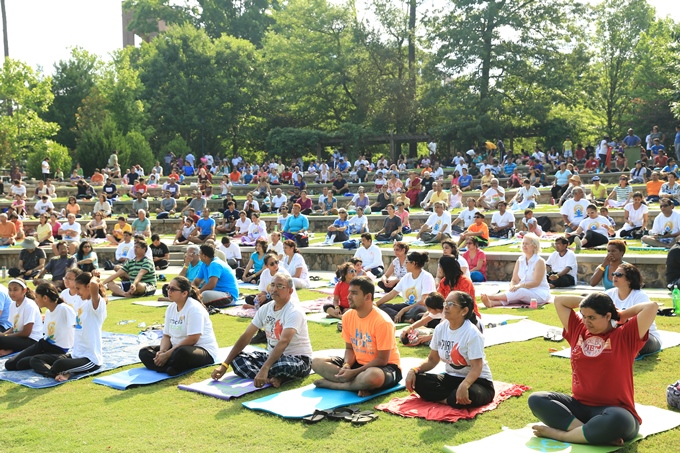 Over a 1000 people gathered on a hot Sunday morning to make Atlanta one of the hundreds of cities throughout the world where the first International Day of Yoga was celebrated with enthusiasm and vigor.

At the outset Ms. Leslie Crespi, serving as the Master of Ceremonies, welcomed the huge audience and explained to them what IDY connotes and its extraordinary significance. Ms. Crespi, together with Mr. Jaideep Sahasrabudhe, spared no efforts to keep the flow of events smooth. Mr. Sudhanva Char offered the gist of the Yoga Protocol while his squad of well-trained participants did yoga demos. Emphasis was on functionality of every body part, be it the heart, kidney, the brain, legs, toes, shoulders, fingers or any other. Char forewarned, “Use them or lose them!” According to him, there is hardly any workout like yoga to sustain operational robustness far beyond the prime of life. 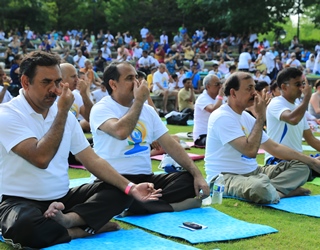 Breathing exercises followed by Ms. Vandana Tantia and her team. Vandana explained the link between breath and mind. Ms. Rajashree Kanetkar led the gathering in meditation and Aum chanting with Sadhguru’s tape giving instructions for ardhasidhasana and yogamudra. Sriram Iyer introduced guided meditation, relaxing the body and mind and enabling focus, moving from the outer world of activity to the inner world of silence. After this, Acharya Vedashrami came on the stage for a vigorous yoga asana display. He explained the different cures that yoga offers for numerous ailments. Then there was a Surya Namaskar demonstration by Mr. Vishal Shah, accompanied by Mr. Ravi Narumanchi and Mr. Divya Raj Singh. The benefits were explained by Vishal Shah stressing the importance of breath control.

Mr. Viral Trivedi explained yogic exercises such as sandhi sanchalan and pawan muktasan for senior citizens. Mr. Manhar Valand explained silent meditation. This was followed by Mr. Kambiz Naficy, an international Kriya Yoga Master who explored the connection between yoga and modern quantum physics. Kriya Yoga helps the practioner to remain calm at the core even in the midst of turbulence. In just twelve seconds it calms brain waves from 14 cycles to 3.5 cycles, Beta becoming Theta waves. Kriya yoga breathing helps oxygenation of blood. When such alkaline blood circulates, the brain becomes at once naturally calm.

The last talk was by the well-known yogi, Amrit Desai. The challenges of life can be met with success when we develop yogic mindful attention and meditative awareness. He held out the promise that with yoga training and practice, hurting relationships and agonizing transition periods in life become opportunities and openings for marvelous personal makeovers.

What ensured the phenomenal success were two main factors: the pride in demonstrating to the world one of the preeminent contributions of India for holistic wellbeing, and second, the team spirit and cooperation between hundreds of volunteers and dozens of organizations, especially the Consulate General of India, Atlanta and coordinators Ajay Houde and Sudhir Agarwal. 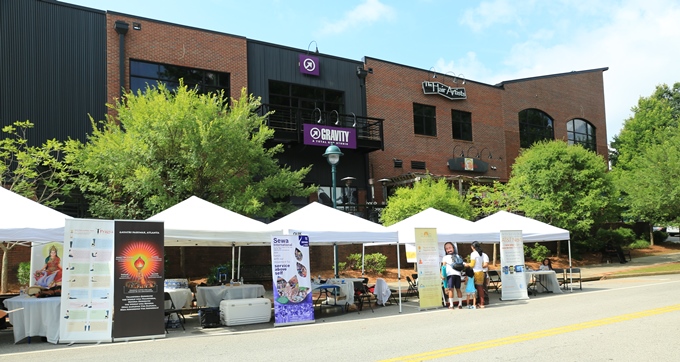 Ms. Leslie Crespi in her closing remarks echoed everyone’s sentiments when she said she looked forward to IDY 2016!