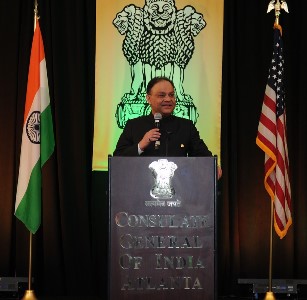 The Consulate of India in Atlanta continued its tradition of hosting a gathering of guests from all over the Southeast for India’s Republic Day reception. The grand affair was staged in the packed Ballroom of the Westin Atlanta Perimeter North on Sunday, January 28, 2018.

The ballroom, full of cheer as attendees mingled and exchanged Republic Day greetings, was set with hors d’oeuvres and beverages. The program was emceed by Pratibha (Patty) Tripathi, a former CNN news anchor in Atlanta. With giant screens on either side of the stage, running live video-streaming of the event, rousing renditions of the U.S. and Indian national anthems were sung by Levin Koshy and John Macdonal, respectively.

CG Singh began his welcome address by thanking attendees, especially those who traveled from far. He spoke of India adopting its Constitution on January 26, 1950, and declaring itself a democratic republic. Inspired by the American Constitution, he stated, it also starts with ‘We the people.’ He spoke of India’s unparalleled diversity of: 1.3 billion people speaking 35 languages of which 23 are recognized as state languages…. And of its economy, which in the last 2 years has become the fastest growing in the world, and which, according to McKinsey, will be 3rd largest by 2025 in real terms and by 2050 will overtake the U.S. to become the 2nd largest global economy. “The partnership with the U.S. is essential for India’s economic and social transformation,” he said, “and is its major bilateral relationship, based on common concerns. In the state of Georgia, India has 60 companies, not all in IT, but also in manufacturing.” He noted that 200,000 students from India studying in the U.S. contribute roughly 6B dollars in fees, and that a million Americans and Indians travel to each other’s nations every year, generating revenue as well as opening hearts and minds through in-person cultural exchange experiences.

CG Singh considered Indian-Americans (25 years and older), of which 77% have at least a Bachelor’s degree as compared to the U.S. national average of 31%, and 44% have a Masters or Ph.D. compared to the U.S. average of 11%. The median household income of four million Indian-American households is $107,000 compared to other households in the U.S. with $53,000. He paid tribute to the USA, stating to loud applause that “this wouldn’t have been possible in any other country. Meritocracy works in this country like in no other. That is why Indian-Americans who immigrated here with scant resources have risen to the top by hard work and are in formidable positions in Google, Microsoft, PepsiCo, etc.” He quoted Secretary of State Rex Tillerson, who in his marvelous speech entitled “Defining Our Relationship with India for the Next Century” described India and the U.S. as two bookends of peace, prosperity, and stability.

Chief Guest Lt. Gov. Casey Cagle lauded Nagesh Singh: “I enjoy a wonderful relationship with him. He has passion, love, and affection, which he brings to his office every day.” He recognized and praised Dr. Indrakrishnan: “We have recognized him on numerous occasions for his work as a physician and his services to others. He is a wonderful man.” Georgia relies on the talent and strength of India, he said. Georgia has the busiest airport in the world, strong infrastructure, a fast growing port, many Fortune 500 companies, and top research institutions. But “the value and dignity of work is the important fabric that unites us together tonight.” He spoke of being raised by his mother, who worked two jobs, instilling values of faith and a work ethic. India is a great example of sacrifice and commitment to service, he said. Georgia’s workforce is diverse, and it needs skilled workers, but 25% of its kids live in poverty. “Education is a great equalizer. Small businesses can fulfill their hopes and dreams here.” He ended with “Thank you for all you do for Georgia.”

Congressman Rob Woodall, who spoke next, requested, in jest, all his bosses in the audience to raise their hands—meaning guests living in his district. A fan of Indian-Americans, of whom there are many in his district, he spoke of the great strides undertaken and recognized that much needs to be done. Up until 2004 there was only one Indian-American in the U.S. Congress: Judge Dalip Singh Saund in California. Then Bobby Jindal was the second. Now there are five! He, too, complimented Dr. Indrakrishnan: “He was the first to open his home to me.” He would phone and suggest solutions to problems and not simply call and complain: “We have a program working for kids who are hungry…. Come, see and learn how we can make things better.” And “We have cancer screening data here. … We can make a difference in people’s lives.” Or “I see some problems and I have some solutions. How can we partner together and get it done to make some difference.” Those remarks drew a huge applause. He continued: “That spirit changes everything.” He closed by saying that “only recently I learned the literal translation of ‘Namaste,’ which means ‘I bow to the divine within you.’ That is very powerful.”

Woodall noted that Nagesh Singh’s biography shows no assignment lasting more than three and half years. “I fear the call will be coming soon. We must request Prime Minister Modi to let him stay a bit longer!” (Loud applause). In closing, he compared: “Modi’s powerful exhortation at Madison Square Garden was ‘India is open for business.’ My message is: ‘America is open for business. Come, stay, grow, and build with us.’”

The last official to take stage and address the gathering, Mayor Rusty Paul, was in India last year, visiting companies, and was impressed with the young men and women. “Our President also declared America ‘open for business.’ All countries are saying the same thing. My message goes further: ‘If you are going to invest in USA, there is absolutely no better place to do it than in Sandy Springs, Georgia.’” He thanked all for their friendship.

Dr. Kakali Bandyopadhyay, a sitar disciple of maestros Pt. Shri Ravi Shankar and Ali Akbar Khan, and also an affiliate faculty in Emory’s Music Department, regaled the audience with her performance of raga Desh. She was accompanied on tabla by Anjaneya Sastri, a disciple of tabla maestro Pt. Prithviraj Bhattacharjee.

While the guests were enjoying the delicious dinner, John Macdonal and Sharoon Farhat entertained them with popular Bollywood songs.

Consul General Nagesh Singh reading aloud the Indian President’s “Message to the Nation” at the Consulate on January 26, 2018. (Photo: ByteGraph)

Earlier in the week, on January 26, India’s Republic Day, the Consulate had staged the usual festivities at its offices. The “Tiranga” (the tri-colored flag of India) was unfurled to release rose petals onto the Consulate’s lawns with attendees and consular staff singing the Indian national anthem. CG Nagesh Singh gave brief remarks on the progress in India’s economy and read aloud the Indian President’s address to the nation. The short and sweet gathering ended with refreshments and photos with the CG and Mrs. Singh.

About John Macdonal:
Amritsar-born John grew up in Chandigarh. He has been influenced by Punjabi folk songs and Sufi-style singing. In the late 80s he formed a Western band called c-Boyz, joined by Bollywood playback singer Krishna Beura. John came to the U.S. in the 90s and is drawn to Bollywood music. In 2008, he made his first album with playback singer Alka Yagnik, which was released in the U.K. in 2009. Besides desi genres, John sings gospel music.

Thanks:
The elegant décor, stunning lighting effects, music & sound system, photo and videography, was all professionally provided by ByteGraph Creations.