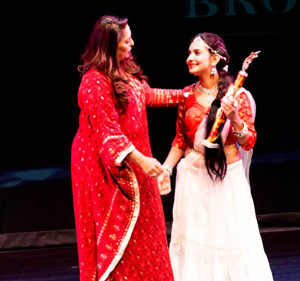 Dance Fever 2017 was held in Atlanta on September 2, 2017. It was judged by famous Bollywood choreographer and judge on the dance talent show Dance India Dance, Geeta Kapoor, who came all the way from Mumbai, India. Dancers from all over the country came to participate in this event, which was promoted as the biggest South Asian dance competition and the first such in metro Atlanta. Presented by entrepreneur Bhavana Anand and her husband Vishal Anand of Anand Entertainment, the event was held at the Infinite Energy Center, Duluth, Georgia.

The show began at 2pm with an opening act and tribute to Geeta Kapoor by Shiv’s Institute of Dance. The hall was packed with around 500 people, all cheering up for the contestants. Prestigious dance schools and many self-taught participants from all over the United States competed. Contestants were divided based on age: kids, teen, and adult, with separate prizes for solo and group. The audience witnessed different styles of dances ranging from classical, semiclassical, Bollywood, and fusion, to hip-hop and contemporary. 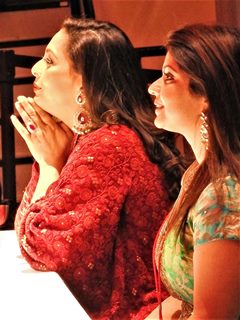 The much coveted prize for the adult solo dance category went to Sagnika Mukherjee from Sagnika Dance School for her dance medley on Radha. She showed her class with Bharatnatyam, Odissi, and Bollywood steps. Geeta Kapoor praised Sagnika: “I think India is missing you. You should have been a Bollywood Star...Beautiful. I mean, it’s very rare to find someone so perfect during the dance with expression, and you are one of them.”

Second prize in adult solo went to Sridevi Ranjit from Laasya School of Dance who also got accolades for her perfectly executed classical dance.


Atlanta Nritya Academy (ANA) came out as the biggest winner of the night with first prizes for the group dances in both kids and adult category. The group dances were much contested with many great performances, but ANA with dancers Sudakshina Mukherjee, Aruna Gutta, Roshnia Hariharan, Lavany Hariharan, Kriti Pandey, Jyothi Balakrishnan, Barshana Chaudhury, and Ranu Gupta raised the bar for all. The adult team had performed a fusion, in which classical steps were danced to an upbeat, fun Bollywood song. At the end of the adults’ performance, ANA was blessed with a standing ovation led by Geeta Kapoor saying, “It reached out to everybody, it reached out to my heart, and I believe that any act that reaches out to a heart deserves a standing ovation.”

Prem Dance Studio set the stage on fire with their electrifying performances. They got the first prize in teen group category and second prize in adult group. “Geeta Maa” showered praises to Prem Rehman, the lead choreographer, who narrated how he started from a humble background in Bangladesh and went on to build one of the most successful dance schools in Atlanta. 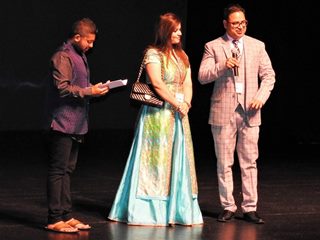 After prize distribution and a closing performance by Prem Dance Studio, the night ended with the audience feeling lucky to witness such a dance extravaganza. The title sponsor of the show, 27th Investments, along with other sponsors, IFA, Cargo Express, Swad, and Patel Brothers were thanked. The masterful emceeing by Monty Kataria had ensured a joyful and happy ambience. Although some contestants won and others did not, everyone was a winner in the end. Dance fever is here to stay. 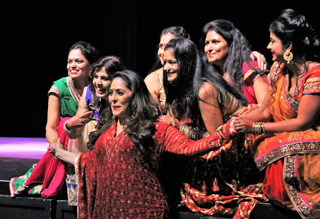 [More photos and videos will be posted soon!]

Tracy Marshall served as the official photographer and videographer for the entire event. She was also involved with the marketing and promotions of the event and arranged for the organizers to be featured on TV Asia.