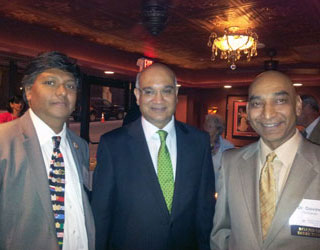 The Hon. Keith Vaz of the British Parliament stands with Viren Mayani and Dr. Govind Hariharan at an Atlanta reception. (Photo: ByteGraph Creations)

May was designated as the month of Asian Heritage, with many programs presented by a variety of organizations, and several noteworthy events in Atlanta highlighted India and international relations.

On May 3rd, Mayor Kasim Reed cut the ribbon at the opening of 200 Peachtree Offices. The refurbished Macy’s building now leases studio offices and is also used for large corporate events, including Global Connect. Mayor Reed and the Assistant General Manager of the Airport, Arnaldo Ruiz, both spoke of the importance of the international business community in Atlanta and through them, the travel opportunities created for their families, friends, and businesses. The time has come to position Atlanta as a major international destination, they said. As it is, Atlanta has the nation’s third largest concentration of Fortune 500 companies.

The mayor then went to the airport to host Atlanta’s Consular Corp dignitaries at the new Maynard H. Jackson Jr. International Terminal, before its formal inauguration. May 16th marked the opening of the new terminal, which saw its first flight to Japan’s Narita Airport take off successfully.

The India China and America Institute (ICA) and the Georgia Indo-American Chamber of Commerce (GIACC) jointly hosted a member of the British Parliament, the Hon. Keith Vaz, the first person of Asian origin (born to Goan parents) to sit in the House of Commons since 1922. At the reception the diplomat announced his interest in hosting an intern from Kennesaw State University at his offices in the British Parliament as early as Fall 2012. He answered questions and spoke about the European Union and his desire to see a relationship develop between the UK, USA, and India. A few companies that enabled the Olympic facilities in Atlanta will do the same in London, he said. He was visiting on an invitation by the Asian American Hotel Owners Association (AAHOA) to present the keynote address at their annual conference.

The Metro Atlanta Chamber of Commerce (MAC) hosted a grand reception at their downtown office terraces to receive both Atlanta’s new Consul General of Brazil, Ambassador Hermano Telles Ribeiro, and the newly appointed Consul General of India for the Southeastern United States, Hon. Ajit Kumar. The Dean of the Consular Corps and Consul General of Germany, Dr. Lutz Gorgens, spoke of the BRICS (Brazil, Russia, India, China, and South Africa) nations: “You cannot help but participate in doing business with the BRICS nations, if you want to participate in the GDP growth.” Atlanta Airport’s General Manager Mr. Louis Miller spoke of the necessary logistics expansion of the airport to keep abreast of the Ports Authority in Savannah, GA.

Consul Kumar noted that the USA is India’s foremost trading partner now. Industries that were previously very well guarded, such as defense, have opened to U.S. technology: Marietta’s Lockheed Martin has supplied not only fighter jets but also their service and maintenance. He spoke of the employment created by Indian companies that now own branded international businesses and a few that have their U.S. headquarters in Georgia.

These events may indicate that the time has arrived for internationalism to be revived in post-Olympics Atlanta. There is still great hope that Atlanta will emerge like the Phoenix, its stated symbol.