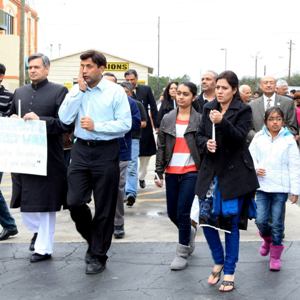 Shaveta Jain leads the march at a vigil she organized after the brutal gang rape of a young woman in Delhi. (Photos: Vinod Devlia)

“Damini in Sanskrit means lightning—lightning has struck India—it is a wake-up call!” said Chand Akkineni, referring to Jyoti Singh Pandey by the name of Damini, the protagonist who fights for a housemaid, a victim of sexual assault, in an acclaimed 1993 Bollywood film.

At a historic and respectful candlelight vigil held at Global Mall, Atlanta, on Sunday, January 6, a large cross section of the South Asian American community came together to mourn, extend heartfelt condolences, express solidarity and sympathy to the bereaved family, and to honor Jyoti Singh Pandey’s memory.

Media headlines about the brutal rape and subsequent death of the 23-year-old physiotherapy student in Delhi enraged the nation, which demanded swift and severe punishment for the rapists and better laws and proper and fair implementation to prevent crimes against women. The news resonated with Shaveta Jain, winner of Mrs. India International 2012 Pageant, who is from Delhi and who has experienced the fear while travelling by charter buses at night. “The terror we felt is still the same, probably worse [now], so I thought of organizing this vigil so that the community can pay tribute to Jyoti Pandey and support her family.”

Shaveta Jain thanked all the attendees, some of whom had come from outside Georgia. “We all feel the pain of Jyoti Singh in our hearts and homes, but it is befitting that we come together to express this here and resolve that such incidents do not recur. …The community at large will see that her screams won’t go unheard of and further that the community will do all it can to ensure a safer and secure world for all women.” 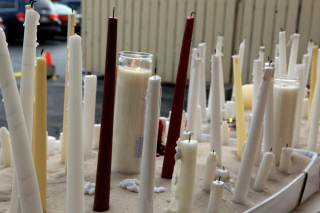 A minute’s silence was observed, and attendees walked with lit candles around the building.

Global Mall owner Shiv Aggarwal said that a hundred and fifty years ago Swami Vivekananda had exhorted the nation, “Arise, awake, stop not till the goal is reached.” He lamented that though 150 years have passed, things haven’t improved much. Ninety-two percent of women feel unsafe to go out at night for fear of physical violence and abuse. He blamed the unholy nexus between the politicians and the police in not implementing the laws and speedily resolving rape cases. He called for more women police officers to better deal with problems affecting women. He also blamed movies and TV serials for disparaging women.

Chand Akkineni, former President of IACA, said this horrific incident is a wakeup call for the nation. “We cannot be mute spectators or witnesses but must raise our voices against such crimes. We can spread instant messages all over the world through social media like Facebook, Twitter, etc. International media is also a very powerful weapon. We also need to change attitudes at home by treating boys and girls equally.” In 2010 the Rajya Sabha passed the Women’s Reservation Bill ensuring 33% reservation for women in Parliament and State legislative bodies—but Lok Sabha hasn’t yet passed it. Chand urged that in 2014, voters should ensure that the bill is passed.

GA State Senator Curt Thompson (Democrat–Dist.5) thanked the organizers for choosing District 5 to hold the vigil. “Ours is the most diverse district in terms of nationalities represented here, with 150 languages spoken. … Remember Swami Vivekananda’s saying and try and stop corruption, gun violence, or violence against women whether in your homeland or adopted land. There shouldn’t [have to] be a shelter for battered women for women of the South Asian community. Our attitudes towards women must change in our homes and hearts. And see that proper laws are passed and implemented. Do not lose focus and do not stop till the goal is reached.”

Raksha director Aparna Bhattacharyya said that victims of domestic violence or sexual assault need not face a life of stigma or shame. We should stop blaming the victim but listen to her and support her so she can live a normal life. “It is disappointing that for the first time since 1994, the Violence Against Women Act has been allowed to expire due to political gridlock. It is being held up because of one of the provisions for the immigrant community. As a result women in our community cannot have police reports made in Georgia because they may not speak the language and police are not taking their reports.” If you are making your voice heard in India, make your voice heard here, too, she stressed.

IACA President Kaushal Tripathi expressed condemnation of the heinous crime and urged passing of stringent laws to put a stop to such crimes. 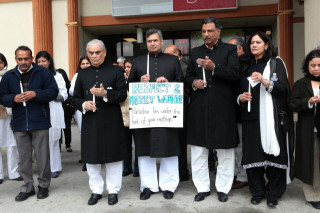 Dr. Wasi Siddiqui, Chairman of the Board of the Aligarh Alumni Association of Atlanta, spoke, and Abdul Qayyum, President of the Pakistani Association of Georgia, and Inam M. Inamullah, a Pakistani community member, opined that such crimes were a sign of moral decay. It was commendable that the show of solidarity had been initiated here in Atlanta, and the struggle for a change for the better must continue.

Five Resolutions were passed, for tougher laws, police reforms, more women police to patrol and to work in police stations to understand women’s needs and grievances, and a transformation in the way the country treats its women.

The South Asian community in Atlanta being incredibly grieved by the horrible tragedy of the brutal gang rape in Delhi of the 23-year-old girl who died in Singapore on Saturday, Dec. 29, 2012, after battling for her life for 13 days, the following resolutions were passed by the South Asian community in Atlanta in the candlelight vigil meeting held on Sunday, January 6, 2013 at Global Mall, Atlanta, Georgia, USA, for submission to the Government of India:

1. The South Asian American community came together to mourn, extend heartfelt condolences, stand together in solidarity and in sympathy to honor the victim’s memory, and to offer their support to the bereaved family. Further the South Asian community in Atlanta condemns the brutal gang rape of the 23-year-old female medical student on a Delhi bus on Dec. 16 by six drunken men. December 16 Dec. 2012 is a very sad and dark day in Indian history.

2. The cross section of the community who attended in large number unanimously demanded the Government of India to take strict action and award severe punishment to the six arrested men involved in the gang rape of the girl, who died in a Singapore hospital.

3. Further it is resolved that the police should speed up investigations.

4. The community declared that proper homage to the hapless girl would be to ensure that this kind of a horrendous incident never happened again, and so called for tougher rape laws, major police reforms, and a transformation in the way the country treats its women.

5. The Indian Government needs to recruit more women police force to patrol and to work in police stations to understand women’s needs and grievances.