Home > Magazine > Around Town > Atlanta Symphony’s “A Flowering Tree,” a performance based on a South Indian folktale

Atlanta Symphony’s “A Flowering Tree,” a performance based on a South Indian folktale

The program featured the Atlanta Symphony Orchestra Chorus, under the direction of Norman Mackenzie. The Chorus provided a unique backdrop for the opera and added depth to the performance. (Photos: J. D. Scott Photography)

Art lovers of Atlanta sat mesmerized watching the two and a quarter hour long performances of composer John Adam’s Mozart-inspired production, “A Flowering Tree” at the Atlanta Symphony Hall of the Woodruff Arts Center in downtown Atlanta on June 7 and 9, 2012. Set in ancient South India and performed by the Atlanta Symphony Orchestra (ASO) and chorus and vocal soloists Jessica Rivera, Eric Owens, and Russell Thomas under the direction of Music Director Robert Spano, the two-act opera, the season’s finale and part of the ASO’s Theater of a Concert series, was a big hit with the audiences for its visual effects as well as its romantic score.

This was the first time that an orchestra has staged a production using Symphony V.0, a multidimensional technology with high definition capture techniques and a proprietary motion graphics content delivery system. Symphony V.0 is a collaboration between the Alpharetta-based technology solutions group, Clark, and stage director James Alexander, who has staged five other ASO Theater of a Concert productions. 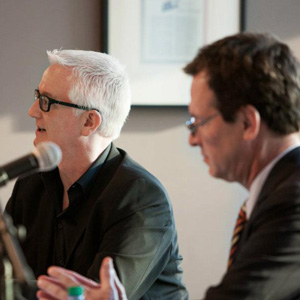 Prior to the performance, stage director James Alexander and ASO insider and program annotator Ken Meltzer gave audience members a preview of the evening’s performance.

Written together by John Adams and American theater director Peter Sellars, the libretto is based on a fifth-century South Indian folktale and poetry by Indian-American Padma Shri AK Ramanujan (1929-1993). It tells the story of a beautiful Indian peasant, Kumudha, who discovers that she has the magical power of transforming herself into a flowering tree whose flowers she sells to support her poor mother. A young prince falls in love with Kumudha after seeing her transformation, claims her as his bride but refuses to consummate their marriage until she performs her ritual. The prince’s jealous sister spies on her and orders Kumudha to perform the transformation for her friends. Midway during her transformation as a half-woman and half-tree the prince’s sister and her friends vanish leaving Kumudha in her peculiar state. Kumudha flees and is adopted by a band of travelling minstrels. Unable to find Kumudha, the guilt-stricken prince, too, becomes a wandering beggar. 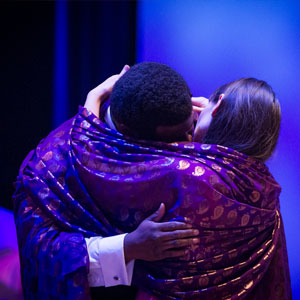 Years later the prince stumbles on a distant palace, where his sister is now a queen. The Queens’ maids, mesmerized by the melodious singing of a strange torso accompanying the minstrel troupe in the marketplace, tell the Queen about the creature with a beautiful voice. The Queen, unaware that this torso is the same Kumudha whom she had tormented, brings her to the court. The prince and Kumudha recognize each other, perform the ritual, and Kumudha resumes her beautiful human form.

The opera was composed to celebrate the 250th anniversary of Mozart’s birth, and it resembles Mozart’s “The Magic Flute” in some ways, both being based on folktales and both telling the story of a couple going through trials to find love. 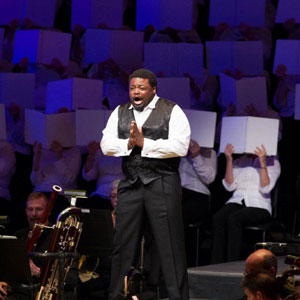 Tenor Russell Thomas performed the role of the Prince in the opera.

Jessica Rivera as the soprano used her melodious voice, gentle dance movements, and poses of the “Flowering Tree” as her outline was juxtaposed on the scene projected behind the chorus. Russell Thomas, tenor, filled the prince’s role; he has earned a name for himself as one of the most exciting vocal and dramatic talents in the world of opera. Grammy award-winner bass-baritone Eric Owens again played the storyteller. While the text for the three main characters was in English, the 200-member chorus sang in Spanish and also acted as the village people and the court. 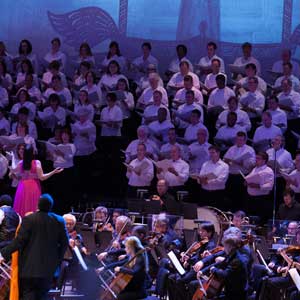 The depiction of Ganesha, Indian puppets, and the sari-clad wicked queen with a tikka on her forehead on the tapestry behind the chorus represented the opera’s Indian origins. The name of Lord Shiva, was mentioned in Jessica’s song in the lines, “Siva, you have no mercy. Why did you bring me to earth?” when she lay in the gutter in the semi-human form. The five forms of Lord Shiva as Creator, Preserver, Destroyer, Concealer, and Revealer relate to the story.

One spectator from Atlanta “liked the idea of visual effects which helped in explaining the story.” A visitor from Mahrashtra also said, “The story, visual effects, and the technology were very appealing.”

Earlier, in an interview via email, composer James Alexander said, “This was my first dip into a rich pool of Indian stories other than the Mahabharata which I read many years ago and, of course, saw the traveling Peter Brook production in 1990 when it came to my native Glasgow….I have never been to India, I’d love to visit and be steeped in the cultural history and get a real feel for the place knowing that each area of the country is so diverse.” “I adore coming to Atlanta,” he added, “because audiences here are intelligent and engaging and ask challenging and insightful questions.”