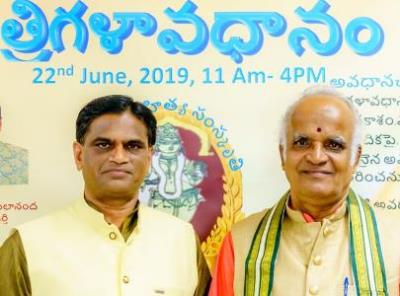 Avadhānaṃ requires immense memory power and tests a person's capability of performing multiple tasks simultaneously. All the tasks are memory intensive and demand an in-depth knowledge of literature. The tasks vary from making up a poem spontaneously to keeping a count of a bell ringing at random. No external memory aids are allowed while performing these tasks except the person's mind.

Avadhānaṃ or concentration is a faculty of mind. In its art form, Avadhānaṃ has been categorized into Astavadhanam, Satavadhanam, Sahasravadhanam, and now also Trigalavadhanam. It has gone into the records for being unique and very complicated to concurrently take 8 different poetic questions from pruchchakas who try to distract the concentration of the avadhani. 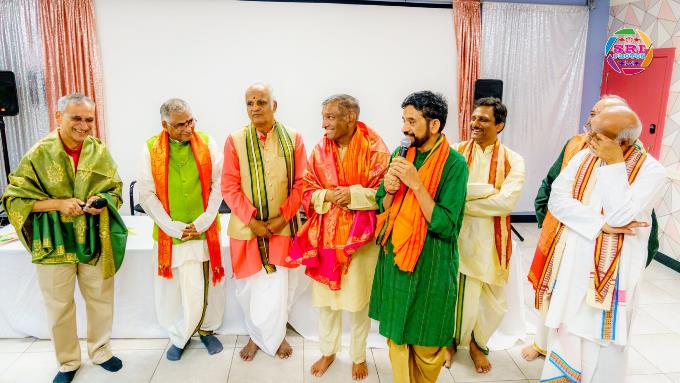 In this program, for the first time in the history of Avadhānaṃ, 3 poets (avadhanis) performed 3 ashtavadhanams (making trigalavadhanam) in 3 different languages on the same stage simultaneously, taking questions from pruchchakas (questioners). "Avadhana Prachanda" Sri Paladugu Sricharan performed in Sanskrit, "Avadhana martanda" Sri Syamalananda Palaparti performed in pure Telugu dialect, and "Avadhana vedanda" Sri Nemani Somayajulu performed in Telugu literary language which is a mix of both Sanskrit and pure Telugu. Ramakrishna Yerrapragada, a well-known writer from India moderated. This is considered as one of the most creative, extremely difficult literary performances that not only tests the poetic skills but also the depths of human IQ.

Also at this function, a new book, Aksharaarchana, written by Pandit Rachaalapalli Devidas from India, was released, and he was awarded the title "Arsha vidya nishnata." Dr. B. K. Mohan, a noted cardiologist and litterateur in Atlanta released the book and presented the first copy to the writer and other scholars on the dais.

The book is a great display of Pandit Devidas's knowledge in the field of devotion or bhakti, based on Vedanta. Unlike a normal satakam, which is a collection of over 100 poems that are similar in meter (called chandas in Sanskrit), Pandit Devidas has used a variety of meters. He has a knack of putting his point with great expressions (samaasa in Sanskrit) following all the rules of poetry. Each poem has a deep meaning. Each poem is a communication with goddess Parvati as a child talks to his mother. He expresses his distress with life in this material plane and begs for salvation. The author has written many other books, and this is another gem.

Videos:
“Trigalavadhanam”
vallurir
Published on Jul 20, 2019
Telugu Sahitya Samskruthi Atlanta has conducted and performed a unique literary event called Trigalavadhanam.
This idea was thought about by Ramesh Valluri, resident of Atlanta and founding President of Telugu Sahitya Samskruthi a forum that works towards enriching Telugu Language and literary events associated with it.
What is Trigalavadhanam: (Three avadhanis in three different Languages performing concurrently and taking questions from Prucchakas in Avadhaanam). This is considered as one of the most creative, extremely difficult literary performances that not only test the poetic skills but also the depths of human IQ.
Avadhaanam or concentration is a faculty of mind. And for it to become an art, Avadhaanam has been categorized into Avadhanam, Astavadhanam Sahastraavadhanam, and with the addition of Trigalavadhanam, having been performed for the first time in the world here in Atlanta, it has gone into the records for being unique, very complicated to concurrently take 8 different poetic questions from Prucchakas who try to distract the concentration of the Avadhani.
The three Avadhanis that have performed part of Trigalavadhanam are Avadhani Dr. Shyamalananda Prasad Palaparty in accha Telugu language, Avadhani Nemani Narasimha Somayajulu in Andhrabhasha language, and Avadhani Sricharan Paladugu in Sanskrit Language. To manage and administer the Avadhanas Ramakrishna Yerrapragada was appointed as samanvayakarta for this event.
We want to thank Pandit Devidas Garu, Ravi Ponangi garu, Dr. Ravi Sharma garu, Dr. Prasad Garimella garu, and Dr. B. K. Mohan garu who being a senior professional doctor has the time and the heart to encourage Telugu literary events here in Atlanta.
Also want to thank 11 Prucchakas for not only witnessing the world record of this event Trigalavadhanam but also participating in the event by their witty poetic questions.
Want to thank the Audience without whom this program could have not been successful.
https://youtu.be/no2Np5FlXHM


[The article above is a Website Bonus Feature, appearing only on the website for September 2019, not in the print/digital issues.]