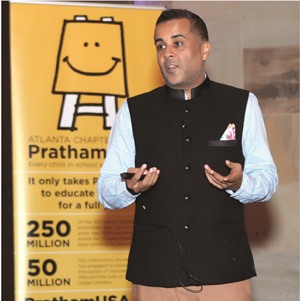 (Left) Chetan Bhagat proved himself as successful a speaker as he is a writer. (Photo: Vinod Devlia)

Pratham (meaning ‘foremost’ in Sanskrit), a rebel of a nonprofit, originally founded in 1994 to educate children in Mumbai slums (recall Slumdog Millionaire), has since grown to improve elementary education not just by swelling enrollments, but by ensuring that students are “learning well,” as their logo alludes. Pratham’s Atlanta Chapter invited Chetan Bhagat for a motivational speech at Tadka Restaurant to around 200 attendees.

Hoards of Indian kids are very well-educated, and hoards not at all. Pratham was born to change that. So it was a brilliant idea to invite a highly engaging celebrity, but a very disruptive author, Chetan Bhagat, to draw attendance and raise awareness.

After a welcome by vivacious attorney Shilpa Jadwani, Apurva Ghelani’s story telling of Pratham’s successes and the need for Atlanta’s Chapter had the audience wrapped in attention. He introduced Chetan Bhagat with his famous dialogue from 3 Idiots: “Jahapahan tussi great ho, tohfa qubool karo.”

Nearly half of India’s fifth graders are unable to read a second grade text! So Pratham developed low-cost solutions in collaboration with the Indian Government, industry, and educators. It has transformed the lives of more than 50 million underserved young across 20 of India’s 29 states. It has equipped 75,000 individuals with job skills and supported more than 1,000 entrepreneurs in building their microenterprises. Their ASER survey assessed 560,000 children by mobilizing 25,000 volunteers who visited 15,630 government schools to gather data—a never-before-done exercise. Unless you measure needs, you can’t create the delivery model. Pratham distributed tablets loaded with quality digital content to 26,000 middle school kids in 2017—and the run continues.

Good governance is at the heart of Pratham’s social-business model. Over 91% of funds raised goes directly to support programs in India. Volunteers both in US & India keep overhead at its minimum to maximize donation outreach such as: every $25 donation educates 1 child. Its programs have been recognized internationally for innovation and impact. In 2018 Pratham USA received a four-star rating from Charity Navigator for the eighth consecutive year, for its “sound fiscal management and commitment to accountability and transparency”, placing it in the top 3% of American charities.

Chetan Bhagat, before his debut as an accidental author, was an investment banker with Goldman Sachs in Hong Kong and later with Deutsche Bank in Mumbai. He was educated at two of India’s most globally renowned academic institutions: the IIT (Indian Institute of Technology) where he earned his Engineering Degree in Delhi, and the IIM (Indian Institute of Management) where he earned his Master’s in Business Management in Ahmedabad. He cares about the education system in India. Craving to create change, he decided to write, especially about college bound kids. While the elite may not read books for lack of time or desire, and others may not know how to read in English, both groups love movies—so he desired to inspire Bollywood to adopt his books and convert them to commercial movies. With 3 Idiots-starring Amir Khan, a mega hit film, Chetan reached the pinnacle of success, and a few more of such disruptive alternative film successes followed: Kai Po Che, Half Girlfriend, 2 States, etc. He quit investment banking in 2009 to be a full-time author, including writing columns about youth, career development, and current affairs in the Hindustan Times and Dainik Bhaskar (in Hindi) to radicalize change. He speaks to corporations, educational institutes, newspapers and media houses, and at conferences. In 2008, The New York Times cited him as "the biggest selling English language novelist in India’s history.” No wonder he chose to wholeheartedly support Pratham Atlanta’s initiative!

Chetan laced his talk at Tadka with scads of humor and used his own family to exemplify his creative genius and grounds for thought change. He is an erudite Punjabi from Delhi, married to an urban educated but modest Tamil-Brahmin wife. “Punjabis are hearty eaters. … Punjabi diet is everything that is normally excluded. You go to a party and … you are stuffed just from tasting the menu. Whereas at my in-laws’ …eating is modest and simple.” He spoke of the trials of joining two very different families raised in two extreme parts of the country: north and south, with distinct taste, social norms, attire, and different weather influencing different lifestyles. With a graph, he compared the prospects of his marrying a Punjabi versus a Tamil-Brahmin. Variables included shopping taste, mother-in-laws, wives’ careers, simplicity of livelihood, etc. All favored his existing selection—and perhaps began his quest of creating 2 States.

On happiness and success: “In the U.S. everything is marked in calories,” he quipped. “In India, no one cares about calories. Everyone wants to be happy and happiness is hard to define.” Although he had well paid jobs with banks, he was not happy. In India, when a child is educated and earning and has a family, that child is termed “settled.” In other words, ambition is satisfied, and the individual will dwell in status-quo for the rest of their life. He did not find being “settled” gratifying, so he quit his career and began to write.

‘Happiness is when your mind, body, and heart are in complete sync and you have an inner voice guiding you. … it is for us to decipher and lean towards the good. In the U.S. everyone is stressed out despite the opulence … As we go through our daily grind we generate … anxiety, criticism of each other, expectations and disappointments. One wishes to try and excel at everything, but that has to be offset with clarity. We need to understand what we really want and live within a spiritual framework.”

He divides people into three categories: (i) Those that merely exist. (ii) Those that feel they are ‘settled,’ and don’t want to take on new challenges. (iii) Those that are like children, willing to take on new challenges every single time. Those in the last group, he says, keep life alive. That spark, that craving for something new and different, gets us up each morning with exhilaration. It keeps us in close sync with mind-body-spirit and will continue to rejuvenate us every day with creative outbursts. It happened to him and he wishes upon all, to give that a try and live. It was a remarkable presentation that moved guests to solemnness despite the embedded humor in his delivery.

Tina Shah and another Pratham leader had set-up a Q&A with questions already sought from guests via a text message on a dedicated cell number. Following his speech, Chetan was presented with those questions in addition to live questions from the audience. A delicious lunch and book signing followed. It was a fantastic event, well managed and striking the right chords! 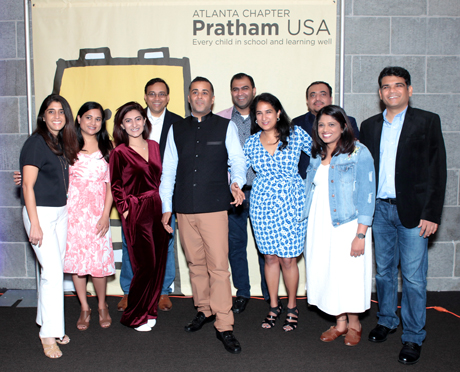