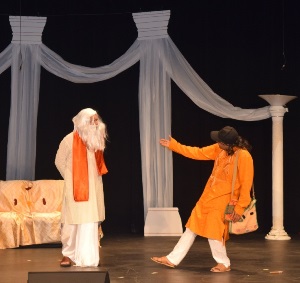 The Bengali Association of Greater Atlanta (BAGA) conducted a Milan Mela—a day-long grand festival of food, shopping, fun, dance, and drama on Saturday, June 4th, 2016 at Berkmar High School. BAGA is a nonprofit organization that promotes cultural, religious, charitable, educational, and literary activities; its mission is to create an environment of mutual goodwill between immigrant Bengalis and other local and regional organizations in Georgia and neighboring states. As a part of that mission, the Milan Mela (meaning “meeting festival”) 2016 was organized as a flagship event to demonstrate Bengali culture, creativity, and heritage among the diaspora, and, rather than focusing simply on a BAGA production, encourage cooperation amongst various organizations.

After lunch, the second part of the cultural program began in the auditorium with emcee Suparna Barua, and the opening song by Chandra Sekhar Dutta of Atlanta Sangeet Bidyaloy, accompanied by Arup Dhar on tabla and Amitava Sen on violin. It was followed by “Ujjala Din Swapna Rangin,” a tribute to the poets, directed by Nita Bose and Soma Mukherjee. The event used creative ways to make the poetry alive with music and dance. Vimala Nikore recited the poem “Veer Tum Badhe Chalo” by Dwarika Prasad Maheshveri. Nita Bose said that she wanted to include poetry from other regional languages and thanked all. There were great performances by Dona Roy, Madhumita Basu, and others. Next was a shruti natok (reading) on “Thor Bori Khara,” a comedy with Debarati Dutta and Anirban Ghosh bantering over food preparation. Then there was a solo dance by Amritaa Ray who put up a masterful rendition to the song “Benimadhab Tomar Bari Jabo” based on a poem by Joy Goswami and sung by Lopamudra Mitra. Amritaa expressed the pathos of the unrequited love of a girl for Benimadhab with all its tenderness, longing, and anguish.

The conclusion of the fashion show “Sari through the Ages.” (Photo: Somesh Karanjee)

A much awaited fashion show “Sari through the Ages” produced by BAGA under the direction of Sonjukta Halder had beautiful models draped in equally beautiful saris showcase the history of the sari and how different regions of India added to the diversity and grace. The audience cheered and applauded the models as they showed their styles. 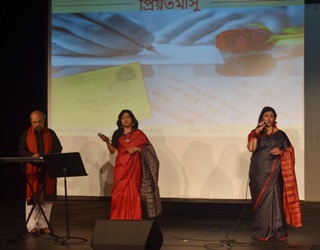 Pujari then presented two programs: “Priyatamasu (To My Dearest)” directed by Subhasree Nandy was a beautiful medley of narration by Subhasree, vocals by Debasri Dutta, keyboards by Amitava Sen, and slide by Saikat Das; “Chokhe Angul Dada” directed by Manas Dey was a satirical drama based on Manoj Mitra’s play, made alive through spirited performances by Abhisek Dutta, Byasdeb Saha, Kinsuk Maitra, Manas Dey, and Sushanta Saha.

Chief attraction of the evening was the drama “E Arek Kando” directed by Shankar Sengupta and Arijit Choudhury. Shankar has been delivering great shows in BAGA for many years and raises the bar to new heights with each new production. There was great acting by Jayashree Guin, Joyshree Chowdhuri, Premanad Goswami, Raja Gautam Kar, Kaushik Basu, Arindam Chowdhury, Angshuman Guin, Dipankar Roy, Subhadra Gupta, and more. Then the husband-wife duo of Arijit Chowdhury and Deblina Roy entertained all with their theatrics. The audience showed its delight with cheers.

A major production was “Alikhito Lipi” directed by Swati Dey—the story of Kadambari Devi based on the novel Prothom Aalo by Sunil Ganguly. Tagore has dedicated many of his poems and songs to his sister-in-law Kadambari Devi who committed suicide on the eve of Tagore’s marriage. The audience witnessed the story of a woman battling melancholy and solitude through spirited acting, soulful poetry, melancholic music, and a dramatic slide show. There were great narrative performances by Bishwanath Bhattacharyya, Swati Dey, Saibal Sengupta; brilliant singing by Anamika Kundu, Parag Pal; and great music played by Byasdeb Rana, Ishaan Nandi, and Amitava Sen. Unfortunately, most of the audience missed it, as it was late and many had to leave. The last item, another play, “Ichhamatir Kissa” by Seba Library, directed by Shameem Islam, had been cancelled for lack of time. 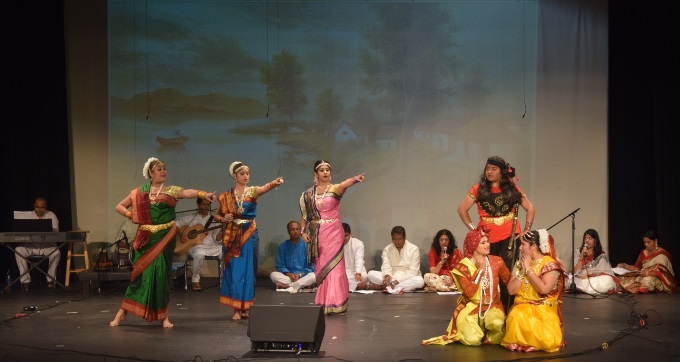 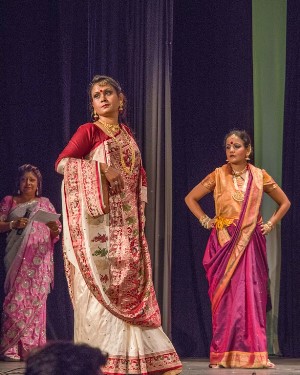