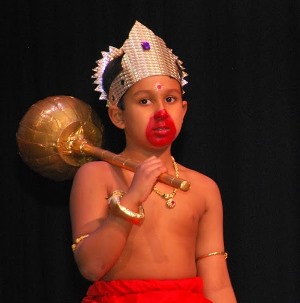 Balvihar Hindi School of Atlanta (VHPA) held its annual cultural program on Mar 12, 2017 at Norcross High School. The three hour long show was presented by students and volunteers of the two branches of Balvihar, from Gwinnett County and Cobb County. The program is a tradition of Balvihar, now in its 26th year, showcasing the talent and Hindi language skills of the students, and reflecting the dedication of the team of volunteers who run these programs.

This year’s theme was “Hindu Values to Live By,” based on stories from Ramayana and Mahabharata, from the Puranas and Indian history, that shape our perception of righteousness, duty, morality, and ethics, inspiring and reinforcing virtues of purity of thought, word, and action—the Hindu samskara (values).

After the traditional lamp-lighting ceremony by Chief Guest D. V. Singh and a welcome address by Kusum Khurana, President VHPA – Atlanta, a colorful mix of dances and plays, interspersed with poetry recitation and a story telling competition, followed. Balvihar celebrates Hindi Diwas every year, and winners of the preliminary rounds compete in a final round in front of the entire audience during the annual cultural program. 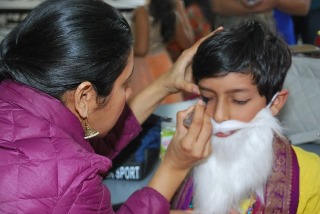 Friendship, confidence, respect: Students of the graduating class emceed. The youngest students, the five-year-olds, presented a parade of inspiring characters. Next was a play about Krishna and Sudama, whose friendship, transcending socio-economic barriers, set an example of what true friendship should be like. The story of Lav and Kush reciting Ram Katha in front of the entire Ram-darbar set an example of fearlessness and confidence for kids in the audience. A play on the ideal ruler King Shibi showed how the head of a state should rule: protecting everyone, upholding rights, and honoring nature’s law of “Jeevo Jeevasya Jeevanam.”

Devotion: Prayers are integral in any religion, and devotion may be expressed in various ways. Many examples are in our pauranik stories, but the purity and simplicity of Shabari’s bhakti is special: she offered berries after tasting them, and Shri Ram calmly accepted them. Another form of bhakti, the Raas-Leela of Krishna and Gopis, based on Narsi Mehta’s bhajan, was an example of selfless love and devotion of gopis for Lord Krishna. When the gopis yearn for Krishna, he reciprocates with his beautiful flute music. 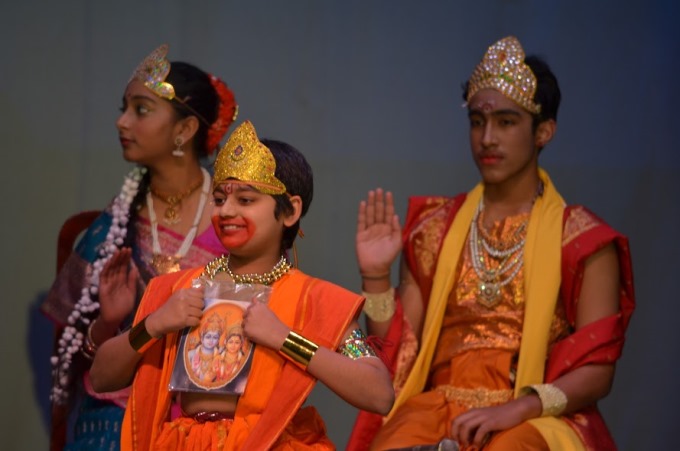 Talking of bhakti, it is impossible to not mention Hanuman. Considering his many qualities, it was only fair to have multiple programs dedicated to him! An energetic group dance on “Jai Hanuman” for the brave destroyer of evil was followed by a drama showing Hanuman’s unmatched devotion for Shri Ram: Hanuman rubs sindoor all over his body for his Lord's long life, in response to Sita putting sindoor on her forehead for the same; then Hanuman tears apart his chest to see if Ram and Sita indeed live in his heart—drawing huge applause from the audience. 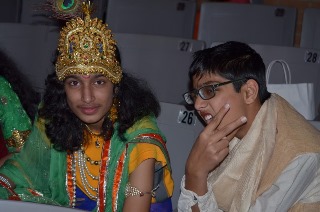 Integrity, ethics: Chanakya, renowned advisor to King Chandragupta, is a historical character whose relevance as a role model seems only to grow with passing time. A short play on Chanakya's policy of never using state funds for personal work highlighted the importance of integrity and ethical behavior.

Intelligence, fairness: In an amusing story, the beloved historical figure Birbal, one of the “Navratna” of King Akbar's court, wins a bet by quoting a number for the population of crows in the kingdom, knowing he could not be proven wrong! He sets an example of intelligence, fairness, and of course, quick-wittedness. 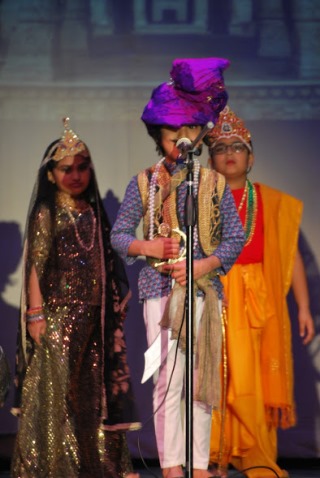 Duty to parents: Shri Ram is the epitome of dignity and decorum, the duty-bound ideal son and ideal king. When Kaikeyi ordered crown-prince Ram into exile for 14 years, Ram accepted to fulfill his father’s promise. Respecting one’s parents (Matru Devo Bhav and Pitru Devo Bhav) is the cornerstone of the Hindu value system. A dance performance on the song “Ye to sach hai ke bhagwan hai” conveyed the message that parents represent God and are to be revered.

Truthfulness: Another virtue which cannot be stressed enough, especially to the growing minds of children, is truthfulness. Raja Harishchandra was willing to sacrifice the lives of his wife and child in the line of duty. The play showing the sacrifices of Satyavaadi Harishchandra conveyed the lesson that honesty is to be upheld at any cost.

Wisdom, nonviolence: As an educational institute, Balvihar stresses the importance of knowledge. A play showed the transformation of Prince Siddharth into Gautam Buddha, The Enlightened One. 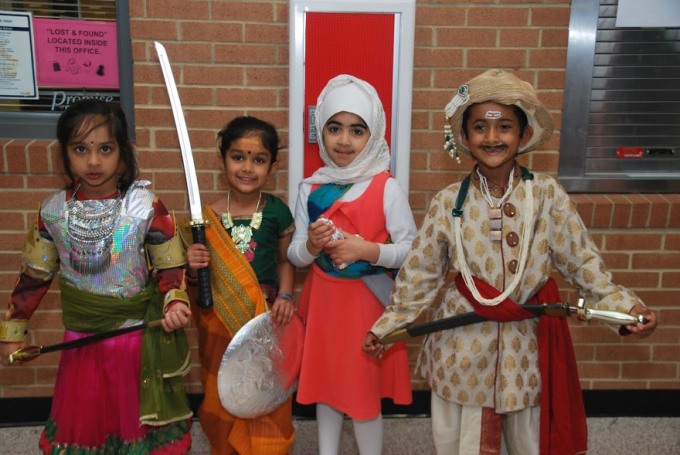 Last but not least, a play based on the well-known poem “Rashmi-Rathi” by Rashtr-Kavi Shri Ramdhari Singh Dinkar and on Mahabharata, portrayed Krishna’s attempt to broker peace between Kauravas and Pandavas to avoid the horrors and destruction of war. This is a poignant message today: violence should be the last resort, and only after every attempt for peace fails. This showed the generosity and humility of the all-powerful Shri Krishna and the ignorance and arrogance of Duryodhan, a glaring example of how one should not behave.

Protecting the land: Finally, all the students marched onto the stage to the beats of “Janani janm bhoomi, swarg se mahan hai,” a message that protecting the homeland is a sacred duty, be it India or the USA.

The program ended with a vote of thanks by Shri Madhav Katdare, coordinator of Gwinnett Balvihar, acknowledging the contributions of volunteers, parents, and especially past graduates of Balvihar who managed the backstage—their support is critical for Balvihar’s success.