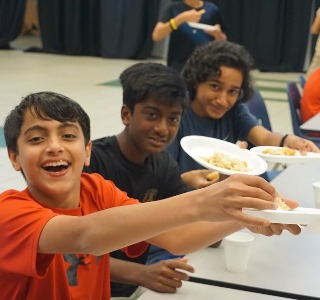 Day-camp kids enjoyed eating Indian food at lunchtime and preparing it in the "food club."
(All photos: Vinay Patel)

StarTalk summer camp is a federally funded foreign language program offered across the USA, and teaches a variety of foreign languages. Balvihar Hindi School of Vishwa Hindu Parishad of America (VHPA) has been hosting this camp in Atlanta for the last six years. The camp combines a well-defined educational objective with a fun summer camp setting; students learn to speak, read, and write Hindi through a variety of games and activities. This year 78 students attended the 12 day camp from June 6 to 18, 2016, at Piney Grove Middle School in Forsyth County, with a field trip to the Swaminarayan Mandir in Lilburn and the Southeastern Railway Museum in Duluth, Ga. The camp was inaugurated with a traditional lamp lighting ceremony by Kusum Khurana, chapter president of VHPA – Atlanta Chapter and a welcome address by Camp Director Manju Tiwari.


Studies have shown that learning a new language can open up a new way of viewing the world with insight into another culture and understanding of another way of life. The program interlaces festivals, traditions, and handicrafts with language learning. This year’s theme was “Incredible India.” Focusing on three Indian states, Kerala, Rajasthan, and Assam, students explored the rich landscape, ancient traditions, and modern technological advances of India, as they embarked on virtual train journeys on some of the unique train routes of the Indian Railways.

The first destination was Kerala, “God’s Own Country.” On the way to Kerala, students learnt about the Konkan Railway, an engineering marvel of modern India with its multitude of tunnels and bridges, built on the extremely rugged coastal terrain. In Kerala, they were introduced to the Onam festival, the world famous boat race, and the variety of products made from the coconut tree. Students enjoyed watching kalaripayattu, the martial arts based dance form of Kerala. 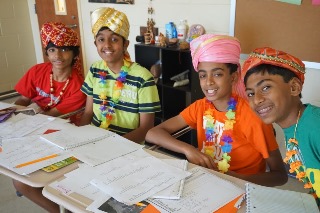 From the lush green landscape of Kerala, students were transported to the desert state of Rajasthan, travelling on the Royal Palace on Wheels train, getting a taste of Indian royalty. The diversity of India could not be more evident as campers viewed the kaleidoscopic images of folk dances and arts of Rajasthan, in stark contrast with Kerala! Also, in a thought provoking activity, campers experienced the water scarcity in Rajasthan and its impact on lifestyle. Walking across the classroom balancing a load on their heads, to fetch water one cup at a time, made them appreciate their own comfortable lifestyle and highlighted the need to conserve water as well as use it judiciously.

Kids then moved eastward to Assam, learning about the Darjeeling Himalayan Mountain Railway, a UNESCO world heritage site, the famous Tea Festival of Assam, and the beautiful bamboo handicrafts. Students learned the process of manufacturing tea and participated in their own tea-tasting event, trying out four different types of tea samples and giving their feedback on the flavors. They learnt about the local traditions of Bihu, traditional attire such as the bamboo hat jaapi, and the famous mekhala saree.

This educational yet fun venture teaches Hindi in context of the Indian subcontinent where the language flourishes, to experience the language in its natural form, rather than a textbook version. The wide range of activities promoted this natural setting. During classroom sessions kids explored eco-friendly traditions of India; in the food club, they prepared Indian snacks such as mango lassi, chaat, kulfi, and neebu ka sharbat; in the craft club campers made cloth puppets, wall-hangings, and tie-dye handkerchiefs using vegetable colors. In the engineering club they built bridges with popsicle sticks and an eco-friendly model train that used solar panels and rain water harvesting. As they worked on various projects, students gradually picked up the language since all instructions were given in Hindi.

Meals provided were from different regions of India, from idli-sambhar to daal-baati, which all of the kids enjoyed much to the surprise of parents! To add to the fun, age-appropriate Hindi movies were shown during lunch. Each afternoon, after the lessons, students participated in sports like kabaddi and kho-kho. Following the hour-long sports time, campers cooled down with relaxing yoga taught by a skilled instructor. Another plus for the camp was the team of teaching assistants and student volunteers, comprising of college students and rising high school seniors well-versed in Hindi. They were great role models who made all the activities a lot more fun for the kids.

Field trips provided a break from the school setting. Relating to this year’s theme, students visited the Southeastern Railway Museum. During the tour, the kids were taken through railway cars and delved into their history. The archaic cars led students to realize how far technology has come. “I never really thought about what technology was like before; it’s crazy to think that this was considered advanced at one time,” stated Vishnu, a first-year student. Campers were fascinated to be able to see and touch the inside of the very railcars that belonged to former presidents. A nice windy ride on the railroad ended an exciting but nonetheless exhausting day of learning.

On the final day of camp, students gathered their learning to prepare a cultural show. They performed crowd-engaging plays, beautiful and moving dances, and informative speeches before their parents and peers. Given only a short amount of time to prepare for the program, this was truly a test of ability and our campers passed with flying colors. On this day, students were unhappy to leave their newfound friends, but eager for the year to come.

The Atlanta Balvihar StarTalk Summer camp has become a popular program in its six years. The success comes from teamwork of teachers, teaching assistants, and volunteers from VHPA – Atlanta chapter. Mrs. Manju Tiwari, former faculty at Emory University, was at the helm as the program director, Vivek Patel, a recent graduate of University of Georgia was the camp administrator, and Mrs. Seema Laddha, a volunteer with Balvihar was the food administrator.

Teachers are trained by world-class foreign language professionals. Since most of them also volunteer as teachers in VHPA Balvihar Hindi School, this training benefits the students of Balvihar throughout their curriculum, year-round. Apart from the educational gains for students, an advantage is the community building among the second generation Indian-American kids. Over the years, new as well as returning students, volunteers, and teacher assistants have bonded, making an extended family that can reminisce on their fun times together and look forward to meeting again.

Thanks:
VHPA, Atlanta chapter would like to thank the administrative team of Piney Grove Middle School for helping the smooth execution of the camp. Also, special thanks to the Swaminarayan Temple and Southeastern Railway Museum for conducting informative guided tours for the campers. VHPA would also like to extend thanks to the community for their continued support of Balvihar StarTalk summer camp.

Website Bonus Feature
Video
Kalaripayattu:
"I will practise Kalaripayattu for as long as I physically can," Meenakshi Gurukkal, 74 years young
I was lucky enough to meet Meenakshi Gurukkal (Kadathanadan Kalari Sangam) on my last trip to India. She was an inspiration to young, old, male, female, everyone and anyone! Meenakshi shows us that Kalari can keep us steady, keep us vital, and keep us inspired for life. Alana
Read more about Meenakshi Gurukkal in this recent article:
http://www.thenewsminute.com/article/defying-age-sword-meenakshi-gurrukkal-keralas-grand-old-kalaripayattu-dame-38620
https://www.facebook.com/KalariAustralia/videos/1060526230657031/