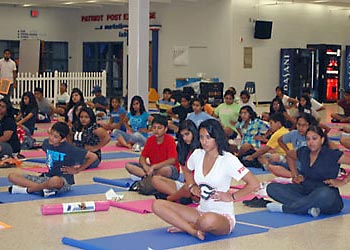 On the first day, wary students eyed teachers and teaching assistants during game time with appalled dismay as they demonstrated how to play kabaddi. However, they soon overcame initial inhibitions, and kabaddi became the sport of choice for a majority of the students for the next nine days of camp. The cafeteria echoed with loud cheering and taunts in Hindi as students learned how the sport is played in India by watching a number of video clips in class. Students also played cricket and field hockey.

Rising sixth graders to rising seniors, students from all backgrounds and with no prior knowledge of Hindi required, came from as far away as New Jersey and North Carolina to take advantage of this unique opportunity to learn a new language and venture into the varied and rich culture and traditions of India.

Earlier this year, Balvihar Hindi School of Atlanta, an educational program of VHP of America, received a federal grant to conduct a 10-day complete immersion Hindi teaching program for 100 students in Atlanta. The camp was held from July 8th till July 17th 2011 at Berkmar High School in Lilburn, Georgia, and this year’s theme was ‘India Through the Eyes of the Youth.’

Georgia State Senator Curt Thompson inaugurated the camp, highlighting the need for students to learn foreign languages in a global economy and urging them to take advantage of all such opportunities. Prof. Bhudev Sharma, a noted proponent of Hindi, also spoke.

The students’ day began with yoga for half an hour under the guidance of a certified instructor. From the moment they arrived at the sign-in desk at 9 AM until they left at 6 PM, students heard and spoke only Hindi.

Students were taken on a journey to the Commonwealth Games held recently in New Delhi. They learned to play ancient and modern games like chess, kabaddi, cricket as well as India’s national game, field hockey.

They learned about various classical music and dance forms on a simulated trip to the Southern city of Hyderabad. Student volunteers performed dances, and some teaching assistants also choreographed a dance for a group of interested students for performance during the graduation ceremony.

A food festival presented a live street market, and students were given play money to engage in haggling and buying food products representing various regions of India. The ensuing drama was highly entertaining as students stretched their Hindi speaking abilities to try and negotiate the best deals possible as well as get a bite of the tasty food to sample.

On a fictional trip to Mumbai, the fashion capital of India, students learned to drape a sari and also about different clothing and styles prevalent in India. Volunteer models were dressed by the class and paraded through the corridors to loud applause.

A field trip to a dairy and a working farm presented a firsthand glimpse of processing, organic gardening, and raising animals. Most students took the opportunity to enjoy a hay ride and to ride horses. To appreciate the architectural beauty of temples, students visited the Swami Narayan Mandir in Lilburn.

The camp concluded with a carnival. While enjoying popcorn and snow cones, students and parents could buy things at vendors’ stalls. Then parents enjoyed the students’ variety show: students demonstrated their grasp of the Hindi language, and each received a certificate.

In appreciation for Shiv Agarwal’s continued support for this camp, a banner in Hindi welcoming visitors to Global Mall was presented to him by Dr. Surendra Gambhir, UPenn Professor of Hindi. Sabitha Venugopal thanked all who helped make this camp a success. Program Director Mrs. Manju Tiwari, assisted by President of the VHPA Atlanta chapter Mrs. Kusum Khurana thanked the volunteers and the teachers and teaching assistants, who hailed from University of North Carolina, Emory, and Georgia Tech, and graduates of Balvihar.

Most students are eager to attend the camp again next year. The federal monitors also gave it high grades and praised the involvement of the community in making it a success for the second year in a row.