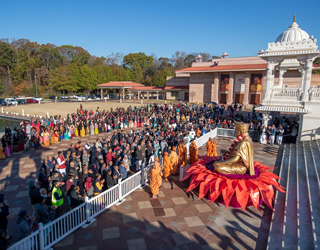 The community leaders, devotees, and well-wishers alike gathered at BAPS Swaminarayan Mandir in Lilburn on November 19, 2022, to commemorate the life of the late Hindu spiritual leader, His Holiness Pramukh Swami Maharaj.

Born in 1921, and respected as a global ambassador of peace, harmony, and human values, Pramukh Swami Maharaj served as the spiritual leader of BAPS Swaminarayan Sanstha for over 65 years until his passing in 2016. His life’s work focused on inspiring, nurturing, and motivating spirituality in the lives of hundreds of thousands of individuals throughout the world.

The theme of the centennial celebration was Param Shanti (eternal peace) and centered on three qualities that Pramukh Swami Maharaj consistently exemplified: humility, universal love, and sincere faith in God.

The program incorporated these characteristics through speeches and skits as well as choreographed dance segments performed by the children and youth wings of BAPS. Video blessings were given on the occasion by His Holiness Mahant Swami Maharaj, the current spiritual guru and president of BAPS. Community leaders also took part and offered their sincere tributes.

The attendees were profoundly impacted and left with a better appreciation of his life, teachings, and work. Most importantly, they were inspired to carry forth his message by imbibing the characteristics of humility, love, and faith in their own lives.

Speaking on the profound impact of his values on individuals and communities, Nitin Joshi, president of Atlanta Sanatan Mandir, said, “Pramukh Swamiji’s legacy is timeless. I have had the distinct pleasure of meeting Swamiji multiple times. His life of selfless service and devotion continues to inspir me and countless individuals throughout the world to follow in his footsteps and serve others without any expectations.”

While reminiscing on his memories with Pramukh Swami Maharaj, Kishan Patel, a BAPS volunteer, shared his experiences, “This program was unlike anything I have experienced in my life. To be able to give tribute and honor the life of my guru who inspired so many like me was truly amazing.”

Under Pramukh Swami Maharaj’s leadership, BAPS established an international presence with the creation of over 1,100 traditional Hindu mandirs as centers of peace and worship around the world. Living and teaching the credo, “In the joy of others, lies our own,” Pramukh Swami Maharaj visited over 250,000 homes across more than 50 countries, and replied to over 760,000 letters personally counseling individuals, helping them through struggles, and inspiring them to live value-centric lives.

This centennial celebration was one of the many such events taking place not only across North America, but also in Europe, Africa, Asia, and Australia, eventually culminating in a final, month-long, grand celebration in India in December.