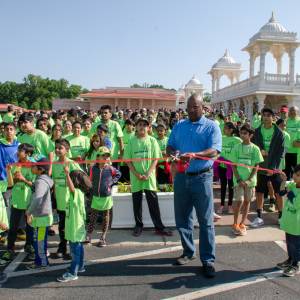 10-year-old Sahaj Patel had his laces tied and was ready to go on an early Saturday morning. Sahaj was on a mission to fundraise for a cause close to his heart and one that reflects a reality of his time: saving the environment. Reversing the impact of global warming seems like a daunting task in and of itself; however, Sahaj was determined to take action and help bring awareness to his local community.

For the last 6 weeks, Sahaj took up the cause of raising funds and awareness to support BAPS Charities Walk Green held on May 7, 2016 in Lilburn, GA. Inspired by the motto of think globally, act locally, Sahaj personally raised over $1,000. With great enthusiasm and ambition, he made an effort to speak to all those that he knew in his local community.

Recognizing the need to promote environment awareness, this year BAPS Charities Walk Green is supporting The Nature Conservancy and its Plant a Billion Trees campaign to restore 1.6 million acres of land by 2025. The Nature Conservancy’s mission is to conserve the lands and waters on which all life depends. With over 1 million members, the organization protects more than 119 million acres of land, thousands of miles of rivers, and operates more than 100 marine conservation projects globally since 1951. In support of this initiative, BAPS Charities walks across North America will contribute to the rejuvenation of dying forests by helping plant over 70,000 trees in the United States.

This year’s walk brought together over 800 participants from the very young to the elderly. The walk launched with a traditional prayer for world peace and an opening speech by Soumya Hombaiah, Director of Finance and Operations at The Nature Conservancy: “We are proud and honored to be partnered with BAPS Charities in sharing our commitment to conserve nature for the environmental good and for future generations.”

BAPS Charities undertakes many such charitable events throughout the year to support the community. In addition to annual walkathons across over fifty cities in North America, BAPS Charities hosts a variety of programs to support healthy living, environmental awareness, and education initiatives. 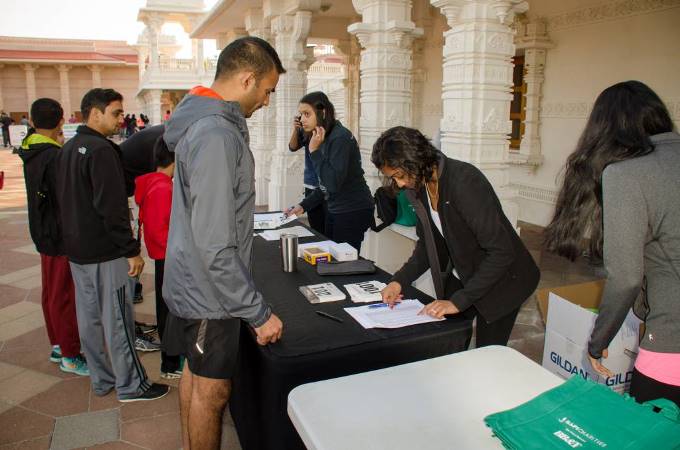 What a motivation for the thousands of volunteers who took action to save our environment!

BAPS Charities donates $100,000 to TNC to help plant a billion trees
Robbinsville, NJ – Vishnu (age 8) along with his younger brother Brahma (age 6) had their laces tied and were ready to go on an early Sunday morning. Vishnu was to participate in BAPS Charities' Walk Green 2016 to fundraise for a cause close to his heart: saving the environment. Vishnu raised $851.59 by going door to door in his neighborhood. Over 17,000 BAPS Charities volunteers similar to Vishnu in 53 cities across USA were determined to take action for reversing the impact of global warming. Their collective effort supported The Nature Conservancy’s efforts to plant one billion trees by 2025 through their Plant a Billion Trees initiative. The effort will help plant 70,000 trees in 2016.

“It means a lot to us that your support is made possible by the thousands of BAPS Charities volunteers who believe, like we do, that a healthy planet is critical to building healthy communities where both nature and people can thrive,” said Mark Tercek, President and CEO of The Nature Conservancy. “BAPS Charities has shown that serving as good stewards of the planet is the collective responsibility that you take seriously. We also appreciate how you bring awareness to environmental issues and environmental opportunities on occasions like Earth Day and by supporting initiatives like planting trees, promoting water conservation and renewable energy sources.”

Speaking on the occasion, Erin Daly, Donor Relations Manager said, “Thank you to BAPS Charities for your incredibly generous contribution to The Nature Conversancy’s plant a billion initiate in North America. I was especially inspired to see so many children and teenagers participating, not just in the walk but also in the opening ceremonies, and management of the walk. Engaging the next generation of stewards for our planet is extremely crucial, and I am glad BAPS Charities shares that commitment.”

John Stapleton, The Nature Conservancy’s Legacy Club Donor Relations Manager, said, “The leadership, support and successful promotion of conversation through the BAPS Charities nationwide walkathons, has raised awareness and support for the restoration of forests in United States. I would like to command BAPS Charities and its unique civil mobilization that transcends nations, states, and ages harnesses a deep sense of volunteerism and inspires and as well empowers us to step up the environmental challenges of our times. You are our true partner in conservation. Thank you.”

TNC staff joined BAPS Charities at 28 of the walk locations around the country to participate as walkers alongside BAPS Charities volunteers, and also provided regional and national updates of their work. Across all Walk Green 2016 events, The Nature Conservancy staff commended the strong support of young people interested in environmental preservation.

Jane Miller, Deputy Director of Philanthropy at The Nature Conservancy in New Jersey commented after visiting the Walk Green 2016 in Robbinsville, “I am blown away that an all-volunteer organization can put together something that is this huge and does so much good and involve so many young people. I understand that BAPS Charities has helped in disaster relief after Sandy, also doing relief work globally not just locally, and they are visionaries in this kind of work.”

4. Erin Daly, Donor Relations Manager of The Nature Conservancy thanks the thousands of BAPS Charities volunteers who helped raised $100,000 which will help plant 70,000 trees in 2016 and a billion trees by 2025. <
br /> 5. The BAPS Charities Walk Green 2016 closing ceremony

7. Vishnu (age 8) receives donation during his door to door campaign to raise funds for BAPS Charities Walk Green 2016 for a cause close to his heart: saving the environment. He raised $851.59

8. Vishnu (age 8) along with his younger brother Brahma (age 6) who went door to door to raise funds for BAPS Charities Walk Green 2016 to help plant a billion trees by 2025.