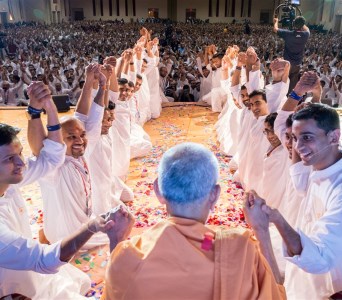 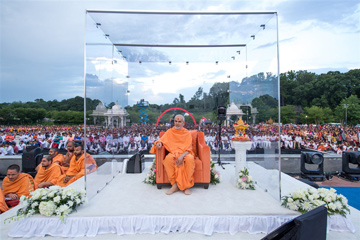 Thousands came from all across the Southeast to mark this momentous occasion and take blessings of Mahant Swami Maharaj, the new figurehead of BAPS.

A welcome assembly was held by BAPS community members on June 23, 2017. Children had been practicing for the many scheduled programs during his visit and had cultivated their knowledge of spiritual texts and devotional songs, committing them to memory. Attending were U.S. Congressman Rob Woodall, Georgia Public Service Commissioner Tim Echols, and Consul D. V. Singh (Head of Chancery). Also present were leaders of the city of Lilburn: Mr. Bill Johnsa, City Manager, Chief Bruce Hedley, Chief of Police, Mr. Doug Stacks, Director of Planning and Economic Development, and Ms. Nikki Perry, Public Relations Manager as well as leaders of numerous Hindu and other organizations from the Greater Atlanta area.

A pujan of shlokas and offerings was performed. Then BAPS youth from the Southeast region performed a traditional swagat dance, and Mahant Swami Maharaj blessed the gathering.

“This congregation and its people welcome everyone,” said Rob Woodall, U.S. Representative for Georgia’s 7th Congressional District. He remembered the life motto of His Holiness Pramukh Swami Maharaj (In the joy of others, lies our own) and mentioned, “While I had never heard the phrase before in my life, I can tell you now with conviction that the joy in these faces is truly found in the joy of others in our community.” While meeting Mahant Swami Maharaj before the assembly, Woodall shared, “I am in awe internally of the spiritual fortitude of your volunteers.”

July 1 was the ten-year anniversary celebration for the mandir, which had been inaugurated by His Holiness Pramukh Swami Maharaj in 2007.

Heer Patel from Memphis, Tennessee was relatively new to the BAPS community during the inaugural ceremonies in 2007 and recalled the event with great enthusiasm, “[Pramukh Swami] was truly someone special …. It has been such an amazing experience to have just as amazing interactions with Mahant Swami Maharaj as we celebrated the 10 year anniversary of the mandir.”

The anniversary celebrations were primarily created and led by the youth of BAPS, who prepared for several months. Yash Soni from Parkland, FL said, “I have … developed a greater understanding of samp (unity) and teamwork. These are two values that he has stressed to youths of my age.”

Highlights from the program included video footage of the inaugural ceremonies and colorful cultural dances. Guests relived the past ten years of the mandir’s history, the development of youth activities, and the installation of the sacred image of Nilkanth Varni. Devotees shared stories of reaching milestones in their spirituality, growing closer to one another, and practicing peaceful living—all inspired and guided by the role of mandir in their lives.

Lilburn’s Mayor Johnny Crist presented Mahant Swami Maharaj with a key to the city, saying, “Most cities … want to be a place where you live, work, and play. But …we need to be a city where there is a place to live, to work, to play, and to pray.” Mayor Crist also brought a proclamation designating July 1, 2017 as Mahant Swami Maharaj Day in the city of Lilburn. Other cities proclaiming the same are Matthews, NC; Boynton Beach, FL; Montgomery, AL; Knox County, TN; and Anderson, SC. 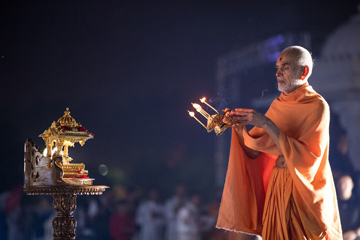 The celebrations concluded with blessings from Mahant Swami Maharaj who encouraged all to uphold unity, maintain faith, and further develop one’s spirituality in strengthening the mandir as a community place of worship.

Mahant Swami Maharaj emphasizes the importance of unity for families, organizations, and communities. His life communicates the core values of BAPS rooted in mutual understanding, tolerance, respect, and consideration for individuals. He aims to inspire devotees to live a healthy, balanced life, filled with spirituality, morals, family values, and respect for others.

People of all faiths and cultural backgrounds are invited to visit and explore the mandir, its architecture, and its Hindu teachings.

About BAPS
The BAPS Swaminarayan Sanstha (BAPS) is a worldwide spiritual and humanitarian organization that is dedicated to community service, peace, and harmony. Motivated by Hindu principles, BAPS strives to care for the world by caring for societies, families, and individuals. Through various spiritual and humanitarian activities, BAPS endeavors to develop better citizens of tomorrow with high esteem for their roots and culture. Its 3,300 international centers support these character-building activities. Under the guidance and leadership of His Holiness Mahant Swami Maharaj, BAPS aspires to build a community that is free of addictions as well as morally, ethically and spiritually pure. For more details, please visit www.baps.org.

About Pramukh Swami Maharaj
Pramukh Swami Maharaj was the fifth spiritual successor of Bhagwan Swaminarayan. Under his leadership, BAPS grew into an international spiritual and humanitarian organization with over 3,300 centers worldwide. He dedicated his life to the well-being of others, traveling throughout the world to foster love, peace, harmony, righteousness, faith in God, and service to humanity. With genuine care and compassion, he reached out to all members of society irrespective of class, color, or age. Recognized and respected as one of India's greatest spiritual teachers, he lived by and promoted the principle: “In the joy of others, lies our own.” Pramukh Swami Maharaj initially came to the United States in 1974. From that initial visit through 2014, he visited North America a total of thirteen times with the goal of fostering growth and development of spiritual activities. Before his passing in 2016, he had appointed Mahant Swami Maharaj as his successor and the sixth spiritual successor of Bhagwan Swaminarayan.