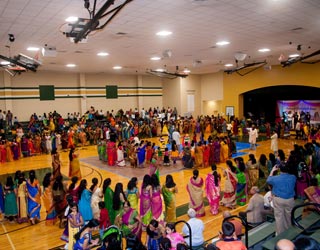 Hundreds of Telangana women living in the Metropolitan Atlanta area showed their true colors early this Fall, decked in traditional splendor! From young to middle-aged, they arrived at the venue with their flamboyant flower stacks that embodied Maha Gowri, the goddess who, in Telengana folklore, is revered as life-giver and a symbol of ideal womanhood. The decibel levels were high and the spirit festive at the venue as the ladies danced energetically around the flower mounds to devotional Bathukamma songs. It was a pleasant sight to see girls as young as 5 joining their mothers and sisters in their ode to Mother Nature! The 8-hour event clearly surpassed the attendance of any Bathukamma event in preceding years in Atlanta as over 1,600 people living in the Greater Atlanta area thronged the venue.

Shami Pooja was performed to mark the ensuing Dussehra festival, following which all the attendees exchanged respectful greetings. Participants played kolattam during the event with great energy and enthusiasm.

The TDF jury consisting of Kavitha Sripathi, Jayasree Kadire, and Anuradha Baddam were all praise for the artistry on display in the floral forms of Goddess Gowri and gave away prizes to several women for their exquisite Bathukammas. There were games conducted at the end of the event and prizes were distributed.

The occasion was graced by TDF president Vishu Kalavala along with other board members. Speaking on the occasion, the Board of Trustees stressed the importance of the Bathukamma festival and acknowledged the role of TDF in the Telangana movement as well as the developmental and charity activities TDF is organizing back home in Telangana.

Dr. Bharath Naravetla, who coordinated the various volunteer teams, attributed the success of the event to their hard work over 8 weeks to ensure a memorable festival.