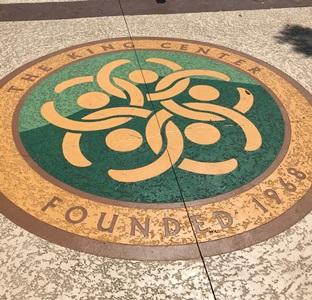 “Travel around the world without leaving Atlanta!”

The King Center in Atlanta organized its second annual Beloved Community International Expo on Saturday, August 10, 2019, from 11am to 7pm. King and Gandhi were paid tributes. The free expo was a day of fun, food, entertainment, and cultural exchange.

This collaborative venture with the King Center and National Historic Park, the Atlanta Consular Corps of over 20 countries, and other key parties including the Gandhi Foundation of USA, transformed the King Center’s historic campus and the adjacent street into a “World House!” Old and young had an opportunity to travel around the world without leaving Atlanta. Passports were issued at the entrance, and visitors enjoyed getting them stamped at the booths of the various countries. These passports were then drawn for prizes.

In another area, many countries showcased spellbinding performances of their talents, culture, attires, music and dance, martial arts, and more. Representing India, Pushyami Lanka Gottipati, director of Sri Kuchipudi Nrityalaya and her students performed a classical dance in Kuchipudi style, and students of Kalaivani Dance Academy presented a Bharatanatyam dance.

The GFUSA booth decorated by Ravi Ponangi, Vidya, Priya, and Antony Thaliath impressively displayed arts and crafts from India, books, and a charkha (spinning wheel), closely associated with Mahatma Gandhi who had used it to symbolize self-reliance during the independence struggle. The theme of the GFUSA booth was the 150th birth anniversary of Mahatma Gandhi and was prominently displayed by banners, brochures, and tourism materials provided by the Consulate General of India Atlanta to GFUSA.

CEO of The King Center, Bernice King, addressed the gathering and appreciated the community and the Consular Corps for participating, including representatives present from India, Japan, Korea, and Taiwan.

GFUSA Chairman Subash Razdan announced, “The majestic full size statue of Gandhi was donated by ICCR in 1998, and today we have ICCR President Dr. Sahasrabuddhe here [from India] to provide special remarks!”

Dr. Vinay Sahasrabuddhe, President of Indian Council for Cultural Relations (ICCR), offered the book The Story of My Experiments with Truth, an autobiography of Mahatma Gandhi, to Dr. Bernice King. He shared that he understood through Dr. King’s biography that he was inspired by Mahatma Gandhi, and replicated the way Gandhi waged war against injustice and inequality and freed India; the struggles of King followed Gandhi’s. Dr. King’s influence is universal, he said, so we carry respect and gratitude for his work and are motivated and inspired by him.

Earlier, Dr. Sahasrabuddhe, Dr. Kulkarni, dignitaries, and community leaders toured the Gandhi room, King Room and Rosa Parks room in Freedom Hall. Dr. Sahasrasbuddhe placed a bouquet of flowers at the crypts of MLK and his wife Coretta Scott King. As part of the Peace Walk, the visitors and members of GFUSA (including Raj and Subash Razdan, Antony Thaliath, Ravi Ponangi, and Mohsin Bharmal) walked to the Gandhi statue for their homage and the traditional garlanding of the statue.

The entire expo space was bustling with fun and friendship, refreshments, enjoyment of tastes, sights, and sounds of our wonderfully diverse world. Volunteers worked to bring the diverse world cultures together and thus helped build bridges and spread the peace and nonviolence teachings of Mahatma Gandhi and Dr. Martin Luther King.