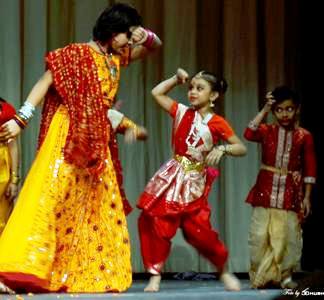 2014 couldn’t have had a better start than it did with the Saraswati Bandana organized by the Bengali Association of Greater Atlanta (BAGA). Of all the occasions that Bengalis celebrate, this is the one where children take precedence—and that is what struck as soon as you entered the venue of Norcross High School where the puja was held this February 8th. 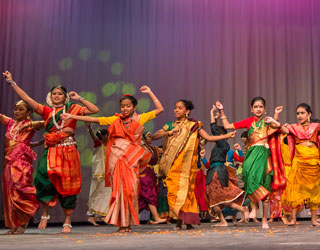 This year the BAGA cultural committee handed over responsibility of the evening cultural show to the dynamic duo of Mallika Halder and Ahona Chatterjee. These girls, with help from their peers, organized and choreographed a program with over 50 children, ages 5 and above. The bonds of friendship, camaraderie, and the willingness to challenge themselves made these kids a delight to watch. 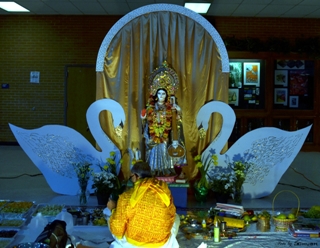 On the morning of Saraswati Puja, the idol decoration and setting were spectacular with white swans, handmade by the BAGA Youth Committee (BYC). The puja, the offerings of flowers and naivedya (food), the enkindled diyas, the chanting of sacred mantras, and the ardent devotion all around couldn’t be missed and gave a nostalgic desi feeling all around. 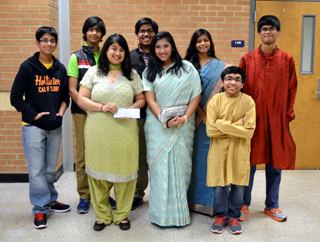 (Left) The BYC also marked this occasion by donating $1,000 to the charitable organization Raksha.

Lunch showed “TLC” and was sumptuous, including the must-have khichdi along with varieties of fish, vegetables, chutney, and rice kheer. BAGA members cooked all the lunch, served that puja day, and senior BAGA members prepared the traditional Bengali sweets, snack, and paan that were served at the end of the occasion.

Soon it was time to sit back and enjoy the evening cultural show, with something for everyone. Invoking the goddess and the power of learning with the traditional songs and the dance to Tagore’s music, it went on to showcase the ballet-inspired dance form in Tanushree Shankar style by students of Swapna Bina dance school and a magic show by an in-house team called Mishti Doi. Taal Tadka, Georgia Tech’s South Asian fusion a capella team hit all the right notes and had the crowd cheering their rendition of many popular songs such as “Counting Stars” and “Radioactive.” 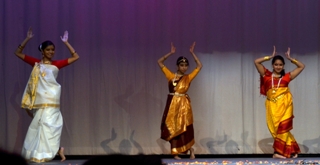 Then came the fashion show, interlaced with dance, titled “E’Shtyle” featuring traditional costumes from the various regions of India. And though the show was well researched, the costumes colorful, the dances engaging, it was the presentation that gave a special touch. The goofy duo of Dev Chatterjee and Pritika Halder enacted two incompetent NRI reporters sent to cover “India Fashion Week” and the recordings of their misadventures, be it travelling or ordering food, playing in the backdrop gave the show much entertainment.

Expect nothing but more of this blend of tradition and entertainment at the promised theatre festival coming on May 10, 2014 along with food, fun, and more entertainment.

Correction: Please note that the credit for the photo of the boys' performance should be by Shubhadeep Roy as above, rather than by Satinath Sarkar as in the print and digital issues--our apologies.