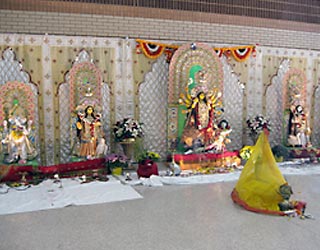 Photo: The kalabou, the “bride” made from a banana tree, representing Ganesha’s consort, stands in front of the protimas at Purbasha’s puja.


For Bengalis the Durga Puja is not only the biggest Hindu festival, it is also the most significant socio-cultural event of the year. The Bengali community in Atlanta celebrated this autumnal festival in the first two weekends in October.

Several other Bengali groups celebrated Durga Puja as well on the first weekend, including the Atlanta Bengali Forum.

The Bengali Association of Greater Atlanta celebrated the puja with characteristic pomp and enthusiasm on the second weekend of October. Their three-day program included Rabindrasangeet by veteran Kolkata artist Dr. Sreekumar Chattopadhyay, who was accompanied by Atlanta’s Raktim Sen on keyboards and Amitava Sen on tablas. Saturday’s program of songs, dances and drama by local artists was followed by noted singer Jayati Chakraborty from Kolkata. On Sunday the main attraction was Kolkata’s singing duo Sivaji Chattopadhyay & Arundhati Holm Chowdhury.