Home > Magazine > Around Town > “Bhairav se Bhairavi tak,” a concert of ragas by the Misra brothers

“Bhairav se Bhairavi tak,” a concert of ragas by the Misra brothers 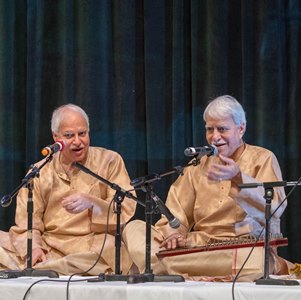 A stream of cultural colors has been sprayed this spring by the Consulate General of India – Atlanta. Beginning with the rare and exquisite South Indian puppets and puppet show at the Center for Puppetry Arts, to the concert of Grammy Award winner and inventor of the Mohan Veena, Padma Bhushan honoree and Indian classical guitarist, Pt. Vishwa Mohan Bhatt, to the latest, the April 28, 2018 presentation of immortal Indian ragas by the acclaimed duo of maestro brothers Pts. Rajan and Sajan Misra—all of which have been thanks to the Indian Council for Cultural Relations (ICCR) exceptionally orchestrated and so very well received.

A raga, as we know, is “colorful passion” in Sanskrit and defines a melodic structure or framework consisting of a minimum of 5 notes, within whose order a tune is created. The order need not be consistent and its rearrangement creates the infinite bank of songs. Additionally, the system also defines the mood that the Raga generates (based on the selection and order of the notes) and the time of the day its performance best delivers the desired outcome. Hundreds of ragas are already established and many more are being developed as the notes and their order continue to be tweaked. Thousands of songs have already been performed, and hundreds are created every single day. The metric is simply mind blowing. It is no wonder the Pandits took years to train, to master these ragas, to showcase them in their complexity and deliver them at the intended time of the day, with the corresponding emotion generated. Add to that the rhythmic cycle which is tied to the raga and the variance of which also contributes to change the emotion it delivers.

The Westminster Schools’ performance theater was a superb venue selected for the duo to present their mastery of ragas to a completely packed audience. Aficionados of Indian classical music were directed to the parking and entrance by the consular staff at the large campus. Once in, the hosts Hon. Consul General Nagesh Singh, Mrs. Pragjna Singh, and consular staff treated attendees with refreshments. 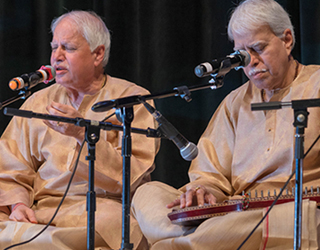 Tarun Talwar, a connoisseur of classical Indian music who is also an entrepreneur and philanthropist, introduced the maestro brothers. Consul General Singh spoke of the cultural richness the brothers have contributed to India over time and how their iconic presentations on this incredible tour, which spans approximately 50 countries in 5 continents, will be celebrated globally. He also encouraged the audience to support such unique cultural events which are a path away from the Bollywood or popular realm, but maintain a significant presence in India’s cultural tapestry. This caliber of events can only be organized if there is a genuinely interested mass of attendees.

The brothers, with their accompanists, Sumit Mishra for harmonium and Nihar Mehta for tabla, and CG Singh, lit the ceremonial diya (lamp) in front of a beautiful large brass idol of Lord Ganesh, and joined their hands in prayer before getting seated on their performance stage and beginning to tune their instruments.

Pandits Rajan and Sajan Misra are the most famous representatives of one of the oldest and holiest cities, Benares and its musical tradition, the Benaras Gharana. Pt. Rajan Misra (the elder of the two) whilst fine tuning his swarmandal, spoke about the concept of “Bhairav se Bhairavi Tak” conceptualized by an aficionado Ms. Saloni Gandhi to present the spectrum of morning to evening ragas. He stated that the duo never intended to perform solo and over the years of performing together now complete each other’s notes in performance. He also spoke of their vast scheduled itinerary over the next few months. Since it was early evening already, they began with the late afternoon raga Madhuvanti. Madhu means honey, and this is a sweet raga with a simple mood of love and romance. They began in 12 beat Vilambit (slow tempo) and increased to a fast tempo composition in 16 beats.

Next, close to Madhuvanti is Madhukosh.... just change the nisadh. There is no dhaivat or rishabh and ni becomes komal nishad, said Pt Rajan. “It's challenging to sing Madhukosh after Madhuvanti, but we will try.” The traditional and old bhajan that the duo sang was taken from an event in the Ramayana: when Bharat returned to Ayodhya and learnt that Ram, Lakshman, Janki (Sita)… were all exiled for 14 years, he was extremely sad. “Mein na jiyun bin Ram Janani” (I won’t live without Ram), he told his mother Kaikeyi.

The duo ended their phenomenal concert with a rendition of Raga Bhairavi. Pt. Rajan said that we must be grateful to have this body on earth to sing the Lord’s praises and of His infinite attributes. They sang their famous bhajan from the movie Sur Sangam, “Dhanya bhag seva ka avsar paya,” ending with an adlib of Raag Thani.

The duo then took their time to meet with the attendees. The evening was superbly spent. For more on the accompanists, see this report on our website.

Accompanist: Sumit Mishra – harmonium. Sumit Mishra learnt music from his Father Pt. Sohan Lal Mishra, and his uncle Pt. Mohan Lal Mishra. His family is said to be the torchbearer of the Benaras Gharana in India. Sumit has performed with many eminent musicians in India and abroad, and is considered to be among the most gifted harmonium players in India.

Accompanist: Nihar Mehta – tabla. Nihar Mehta comes from one of the foremost and respected families of philosophers and musicians in Ahmedabad. They are also famous for “SAPTAC” – a music school and related festival – founded by the family in 1980. As Nihar grew up constantly surrounded by music, it became second nature to him, and from the age of 12 he started learning tabla from his uncle Nandan Mehta and Pt Puran Maharaj. Nihar was greatly inspired by his dada Guru Pt. Kishan Maharaji.

Sound was provided by Sandeep Savla.