Home > Magazine > Around Town > Bhajans for 9 ways of devotion

Bhajans for 9 ways of devotion 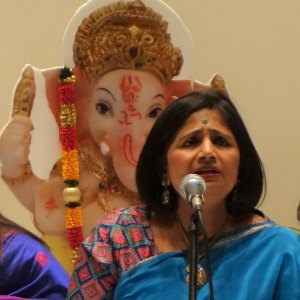 Chinmaya Swaranjali is the musical wing of Chinmaya Mission. Chinmaya Swaranjali is a movement dedicated to exploring the mystical world of Indian classical and devotional music and discovering its hidden joy of infinitude. A typical swaranjali group performs in various areas including recitals of devotional music, audio-video multimedia concerts, workshops, classical orchestras, etc.

Inspired by Pujya Gurudev H. H. Swami Chinmayananda, the members of the group do not look upon music as just an idle passion, but as a dynamic vehicle to seek the inner source of joy and divinity. They sing as a tribute to their Master and Guru, they sing to spread His message, and they sing with their hearts soaked in His Love. 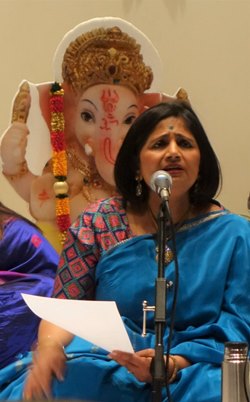 Chinmaya Mission Alpharetta Swaranjali presents local artists and promotes interest in both Hindustani and Carnatic music. The team organizes concerts on the 3rd Sunday of every month at beautiful CMA ashram in the presence of the mandir’s main deity Sundara Krishna. The new year opened with a beautiful bhajan sandhya by Sujatha Rayburn.

Sujatha Rayburn is a classically trained singer and performer in both Hindustani and Carnatic traditions of India. Sujatha is trained under eminent gurus and has given several performances in India and the U.S. under the aegis of various institutions. Sujatha teaches Indian classical music in the Johns Creek area while continuing to be an ardent student of music herself, pursuing advanced training in Hindustani music.

Sujatha was accompanied on harmonium by Amitava Sen, from Calcutta, who learned music from maestros from South and North India, and also plays a number of other instruments. Amitava composed and wrote songs that were later recorded by renowned singer Suresh Wadkar. In Atlanta, Amitava studied Western violin techniques and performed and composed music in a variety of styles.

On the tabla was Anjaneya Sastry, a disciple of Pandit Prithwiraj Bhattacharjee. He regularly performs at Hindustani classical concerts and has accompanied several luminaries such as Ustad Shahid Parvez among others.

Sujatha’s presentation delved into the nature of bhakti and the nine forms in which it can be expressed as elaborated in the Srimad Bhagavatham and the Puranas. Bhakti can be cultivated by the systematic practice of engaging in meaningful devotional activities that can bring the devotee closer to the divine. Srimad Bhagavatham elaborates on nine forms of bhakti: Shravanam or hearing the names and glories of the Lord, Keertanam or the chanting His glories, Smaranam or remembering the Lord, Paada sevanam or serving the Lord’s feet, Archanam or worshiping the Lord, Vandanam or offering obeisance unto the Lord, Daasyam or serving the Lord as His servant, Sakhyam or developing friendship with the Lord, and finally, Aatma Nivedanam or the total surrender to the Lord. A devotee can practice any of these nine forms, whichever appeals or suits his/her nature.

Ultimately, bhakti is bliss and more blissful would be our lives when we cultivate and practice any of the above discussed navavidha bhakti in our life journeys. The path of bhakti is the easiest, and if practiced regularly, it would gradually uplift us in the progressive realization of the Supreme. Remembering and chanting the names of the lord at all times lets our hearts bloom into beautiful flowers of divinity, by drinking the daily dosage of the divine nectar of eternal bhakti.

Details from the presentation at the concert:
Bhakti:
The Narada Bhakti Sutra, a discourse on the nature of bhakti based on the experiences of Sage Narada, vividly describes bhakti as “The nature of perfect love for a personal God devoid of any personal desires or external motives and conditions. It is like a nectar, which upon drinking, leads to the experience of ultimate bliss (Sat Chit Ananda). Bhakti has a long tradition in India and its ideas have inspired many popular texts and saint-poets in India. The Bhagavata Purana, for example, is a Krishna-related text associated with the Bhakti movement in Hinduism. In the twelfth chapter of the Bhagavad Gita, Krishna describes bhakti yoga as one of the paths to the highest spiritual attainments, and tells Arjuna, “I consider the best yogis to be those ever-steadfast devotees who worship with supreme faith by fixing their mind on Me as their personal God.”

1. Shravanam
Shravanam means ‘listening’ to the divine glories of the lord pertaining to His form, qualities, leelas or divine plays, miracles, and spoken words like the Bhagavad Gita. Shravanam can be cultivated through regular satsangs, by listening carefully to the words of the wise and that of the ancient seers and also regularly listening to the teachings of the scriptures. Three qualities are needed: a yearning to listen, listening with total faith, and putting into practice what has been listened to. The first presentation here is an abhang or Marathi bhajan presented by Nitya, "Keshava Madhava Tujhya Naamantare Godava" in raag Bhopali. This song literally says Keshava Madhava, reciting your names is such a sweet experience.

2. Keertanam
Keertanam is ‘singing’ the praise of the lord’s magnificence and omniscience with heartfelt devotion. Chanting God’s name brings relief to the devotee’s mind. By constantly chanting the lord’s name, devotees like Dhruva, Draupadi, Prahalad, Meera, Chaitanya Maha Prabhu and Tukaram achieved God realization. It is said that Keertanam is the only way to achieve salvation in this kali yuga. The first bhajan is "Giridhari Gopal Krishna" that mentions the various names of Krishna; the second bhajan, "Om Namo Bagavathe Vasudevaaya," expounds on the various forms of Vishnu.

3. Smaranam
Smaranam is the constant ‘remembrance’ of the lord, reveling in the contemplation of His beauty, majesty, and compassion. The first bhajan is by a contemporary composer Narayan Agarwal who goes by the pen name Das Narayan.  This song is set to raag Rageshri : "Shyam Shyam ki rat lagi," which means I am constantly thinking of Shyam. The second is "Shri Krishna Hari."

4. Paadasevanam
Paadasevanam is worship of the lord by concentrating upon or ‘honoring’ His feet or Paadukaa (sanctified sandals). To approach a person’s feet is a sign of humility or respect. The first bhajan is "Prabhuji charan sukhdam" in raag Bhimplas, and the second is "Shyam Charan Man Bhaaye," both of which were penned by Kavi Das Narayan.

5. Archanam
Archanam is the complete “offering” in the form of pujas or ritualistic worship, chanting mantras, singing bhajans, offering arati, food, flowers, and even clothes to the Supreme, as a means to develop a relationship with the God as a person. One can perform archanam to all the deities or to a particular deity, at a temple or at home or even within one’s mind. The bhajan is "Shri Krishna Hari" in raag Bihag.

6. Vandanam
Vandanam is ‘prayer’ to the lord, seeing one’s favorite form of the Lord everywhere and in all beings and objects. The bhajan is "Ae re ae re mana" in raag Gorakh Kalyan.

7. Daasyam
Daasyam is where the devotee sees himself as not just the ‘servant’ of the Lord but also the servant of the Lord’s devotees, with no sense of inferiority. Hanuman is the supreme example of daasya bhaktha. The bhajan is "Deenan dukh haran dev." This surdas pad examines how devotees like Dhruv, Prahlad, and Draupadi, who completely surrender to Krishna, receive his infinite blessings.

8. Sakhyam
Sakhyam is being the ‘friend’ or sakhaa of the Supreme. The first bhajan is a Parmanand bhajan, "Chalo sakhi kunj gopal," which exhorts the gopi/gopikas to seek Krishna’s delightful company in the forest bower. The second is "Shri Ranga," an unusual Marathi Hori in raag Manjh Khamaj, which sees Krishna playing holi with his gopi friends.

9. Aatmanivedanam
Aatmanivedanam is ‘complete surrender’ to the will of the Supreme, with no traces of ego in the devotee’s heart. The devotee and the lord become one. Krishna says, (Bhagavad Gita,9.22) “He who constantly remembers me and worships me at all times, is protected and his welfare is taken care of by Me at all times.” The bhajan is "Bhaja hu re man," a Bengali pad by Govinda Das Kaviraj, in raag Bhairavi.