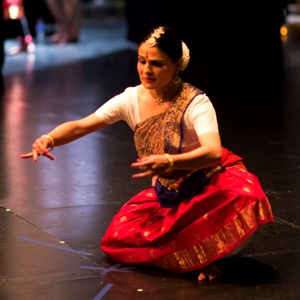 A fundraising dance-music concert, Traditions – Transitions, was presented by Natya Dhaara Center for Performing Arts, for Nepal House – U.S. Chapter, at the Porter Sanford III Performing Arts and Community Center on January 19, 2014. All proceeds of the fundraiser went to a girls' school in Pokhara, Nepal.

The concert was conceptualized and directed by Uma Palam Pulendran, director of Natya Dhaara. A senior disciple of the Dhananjayans trained in Bharatanatyam, Uma is an innovative artist who juxtaposes the ancient and revered traditions of Bharatanatyam with her own avant-garde interpretations of it and with other creative art forms from other cultures.

The inspiring “My Changing Planet” by Toby Brightman was choreographed elegantly by Uma. (Photo: Venkat Kuttua)

The concert began with the sloka on Ganesha and the dhyanaslokam on Nataraja by Raji Venkat followed by tiny tots dancing to the music of Shankar Mahadevan. “Mayura Alarippu” was performed with graceful movements by young dancers with peacock feathers on their heads, turquoise blue contemporary costumes, and artistically designed bindhis on their foreheads, while imitating the movements of the peacock. “Thodaya Mangalam,” a piece on Rama, was performed by Siddarth Kelam with majestic movements and rhythmic steps. An interesting piece was the inspiring “My Changing Planet” by Toby Brightman, choreographed elegantly by Uma and typifying her signature style of choreography.

Kylesh Sharma, the Atlanta teenager who founded the U.S. Chapter of Nepal House, gave a presentation on the organization. He described his experiences visiting Nepal and having to see how not all young children have the privilege of education and how we here in the U.S. take free education for granted.

“Tamil Vandanam,” a piece extolling the ancient language of Tamil, had beautiful patterns of movement and geometry, which is a signature style of the eminent choreographer Radhika Shurajit. The dancers were in perfect coordination. The traditional piece, “Jathiswaram,” was performed neatly with clean lines and “Shabdam” was performed by Uma herself with total sublime involvement. Ranjani Murthy, a very fine dancer hailing from Tennessee, performed “Sri Krishna Natho” by Thirumalai Srinivas. Ranjani showed maturity and depth in her dance. The varnam, one of the most important items in the Bharatanatyam repertoire, was danced by senior Natya Dhaara students accompanied by Uma.

Following the intermission was the musical presentation by G.S. Rajan and Anjaneya Sastry. Rajan, a world renowned flutist, has made Atlanta his home. His bhajans oozed with bhakthi and were soothing to the ears. Anjaneya Sastry, a disciple of Zakir Hussain, ably supported Rajan on the tabla. Neil Sharma, a self-taught Hindustani singer, sang a couple of bhajans, and the audience joined him in chorus.

Following the musical presentation was the keerthanam “Sri Chakra Raja” performed by a group of four dancers, Keerthi Ramachandran, Purnima Rao, Yami Joshi, and Nandhini Prakash, describing the greatness of Rajarajeswari, the remover of all obstacles and the source of compassion and love. “Chandana charchita,” an ashtapadi by Jayadeva depicting the mischievous Krishna, was played by the very talented Dharshana Dhantu. The gopis were played by Raji Venkat, Keerthi Ramachandran, Dharani Balakumar, and Dhakshi Balakumar, who performed with scintillating expressions.

The next piece was the most unconventional and surprise piece, “Mille lune mille onde,” an Italian love song performed in place of a traditional padam. This song was by none other than the acclaimed opera singer Andrea Bocelli. Uma danced her way into the hearts of the audience with her intense and powerful depiction of love. The penultimate piece was the tillana choreographed by Uma’s gurus, the Dhananjayans. This traditional tillana was presented in a contemporary manner with beautiful group formations.

The next item was the sivapuranam from Manikkavasagar’s “Thiruvasakam.” This prayer describes the formlessness and endlessness of God. With stunning visuals, abstract movements, and statue-like poses, the item was a fitting finale to the program.

The effort not only by Uma Pulendran, but by the young dancers and the parents shone through. This was a program that everyone could enjoy whether you are a novice in Indian classical dance or a seasoned spectator. One member of the audience suggested that programs like Traditions - Transitions should be held thrice a year!