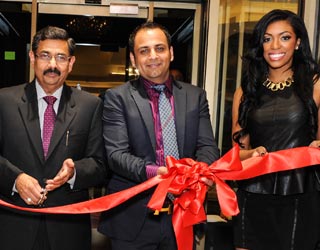 Porsha Stewart of the hit reality TV show, The Real Housewives of Atlanta, was one of the celebrity guests. She is seen here doing the ribbon cutting along with Bhindi’s Atlanta location head, Jayant Bhindi, and his son Nick. Two generations of the Bhindi team hosted over 300 guests including community leaders at their grand re-opening featuring a 7000 square feet showroom, and a diamond collection that is “ten times bigger” than before.

“Everything here is amazing, and everything is totally different from one and another. The diamond collection is absolutely exquisite. It is art, pure art,” gushed Porsha Stewart of the hit reality TV show The Real Housewives of Atlanta, one of the celebrity guests who attended Bhindi Jeweler’s grand re-opening on Friday, February 8. Several community leaders such as Consul General Ajit Kumar and Pravasi Samman Award winner Subash Razdan, along with over 300 other guests attended to celebrate Bhindi’s newly renovated and spectacular showroom.

In tune with the theme of luxurious indulgences, guests were treated to an exhibition of fine automobiles from Fisker Automotive outside the showroom. Inside, guests such as former Miss India Georgia sisters, Meghna and Movina Nagarajan, as well as other models, along with community members, were taking in the lavish sights of the showroom and the jewelry.

The entire Bhindi family, including brothers Vinod, Jayent, and Dhanesh, as well as the third generation of operations managers Sanat, Ronil, Hitesh, Nikhil, and Ashwin were busy mingling with guests. Champagne and other spirits, along with appetizers and food added to the indulgence. Familiar community figures were seen trying out Breitlings, Omegas, and Mont Blancs, some of the several luxury brands among Bhindi’s professional relationships.

At over 7000 square feet, the showroom, says Bhindi, is the largest jewelry showroom in the Southeastern United States. Over its 70-year history of American jewelry retail, Bhindi has had award-winning showrooms in San Francisco and Artesia, California, as well as Atlanta, and now the newly refurbished Atlanta store has been nominated for an award for “Best Design/Architecture for a Jewelry Showroom.”

Many guests were indeed awestruck by the vast expanse of the showroom, and a seemingly unending selection of jewelry. Like many other Indian jewelers, Bhindi has been known for its 22K gold jewelry. But part of the renovation also included expanding the range of offerings for a wide cross section of Indians, South Asians, and even the mainstream connoisseurs of fine jewelry. “We are concentrating on the new generation by designing jewels that appeal to them. And yet, we are not forgetting our roots in traditional culture. We find that many of our young ladies still want traditional jewelry for events like weddings, but then for formal evening functions they want diamonds—that’s why we stepped up our diamond collections,” said Vinod Bhindi, the elder brother who serves as the president of the company.

When asked why they did away with the diamond room that was part of the older showroom, he explained, “Because that room was very small. Now the diamond collection is ten times bigger.” We have sets from $1,500 ranging upwards of $250,000. So if a buyer walks in with serious intentions like that or if it’s just someone looking for a small solo piece for a lunch out with her friends, we have something for everyone.”

Stewart, who is one of the better respected and loved of The Real Housewives of Atlanta, mingled with guests and graciously posed for photos. She said she felt like “a kid in a candy store.” Talking about why she liked patronizing the Bhindi store, she said, “There is nothing like building that relationship and having a private jeweler who knows your taste. No one wants to go into a store and spend that kind of money only to find everyone else wearing the same thing.”