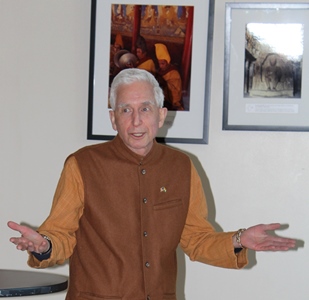 Thanks to a generous donation from the Sheth Foundation, a photo exhibit of award-winning author and photographer Robert Arnett's work is on display through March 7, 2018 in the Social Sciences Atrium at Kennesaw State University (KSU). The exhibit is part of the KSU Division of Global Affairs Annual Country Study Program: Year of India. The program dedicates a year to academic and cultural events exploring India's rich political, economic, and artistic history, thus offering Kennesaw State students and members of the Atlanta community a variety of ways to engage with Indian culture.

Arnett's interest in photography dates back to his early days of selling fine art with his brother. The two sold a variety of art pieces, but the Indian art particularly interested Arnett. He looked into deciphering the meaning of the art which led him to his own discovery of Eastern religions and the secrets behind one of the oldest surviving civilizations in the world—India.

In 1967 at the age of 27, Arnett traveled to Detroit on business. One of his colleagues invited him to a yoga exhibit at the Detroit Art Institute. At the time, Arnett says he didn't know what yoga really meant. He explained that most people believe yoga is a physical exercise, but he found that was only a minute part of the meaning of yoga. Learning that yoga meant union of soul and spirit led to his interest in meditation. He then wanted to see the country and people who developed what he calls a nonmaterial approach to life.

When Arnett traveled to India for the first time, he did not intend to write a book. Captivated by the people, landscape, religion, and culture, Arnett decided to share the country he fell in love with through his eyes. Arnett enjoyed most the overall peacefulness and respect he found in Indian culture. He says that Indians are the most hospitable, honest, and family-oriented people in the world. 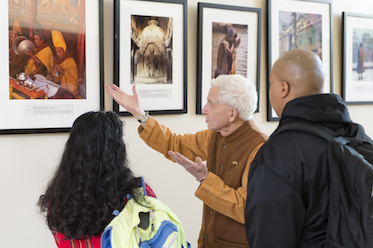 That overall peacefulness and respect is exemplified in his photography. His photos show religious symbols and cultural activities in a visual journey through the country. He encourages his audience to delve into the meaning of the symbols found in his work. If you visit their higher meaning, he says, you will find that sacred and religious symbols of the world are universal, and he hopes that his audience will understand that no one culture has a monopoly on truth.

"I would hope that they would take away a greater degree of understanding for other cultures and, particularly, tolerance for things different than their own," Arnett said.

At the grand opening on January 23, exhibit visitors enjoyed traditional Indian food catered by Moon Indian Cuisine. Arnett led a group through the exhibit examining the symbols, meaning, and interpretation of each photo. Food and travel writer and founder of the nonprofit organization Go Eat Give, Sucheta Rawal, and cyber security professional Dipak Rath attended the opening. Natives of India, they both wanted to see how a person who didn’t come from India viewed the country. 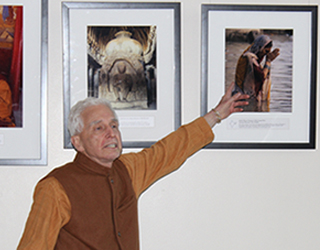 “I really like the way he explained the diversity in India and the commonality of different religions giving the same messaging,” said Rawal.

Rawal and Rath hope that message will resonate with KSU students and help develop understanding and perceptions of India and Eastern religion.

Arnett's passion for a country that rejects materialism and focuses on uniting mind and spirit comes to life in this collection of photos that are thought provoking, inspiring, and telling of the peaceful and spiritual nature of India.

Take the time to experience this wonderful gift to KSU that connects the community to the captivating world of India.
The exhibit is free to all and will be open daily through March 7.

Preview of the photo exhibit
http://www.atmanpress.com/india-unveiled/photo_exhibit/