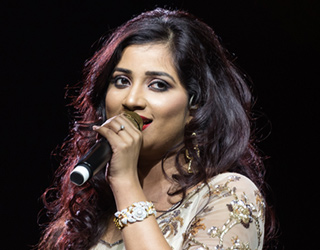 Indian films’ paramount female vocalist​, Shreya Ghoshal, who made history by recording her debut repertoire of extremely famous songs for Sanjay Leela Bhansali’s magnum opus Devdas whilst studying for her 12th grade exams, was rocking Atlanta—literally in a storm. While Hurricane Irma approached on September 10, 2017, Shreya’s professionalism and expertise with which she delivers her concerts came through once again, as after ascending the stage she belted out one hit after another, nonstop, for almost three consecutive hours to the astounding appreciation of the crowd. Graceful as she is, she was joined by a thirty-five member strong symphonic ensemble, who were, in fact, musicians who had recorded with her for her debut film, along with their conductor who had been the music arranger for Devdas!

The male artist accompanying her to perform a few male solos and duets with her was also a Sa Re Ga Ma winner: Kinjal Chattopadhay. So precise was the music performed and the audio assistance, that there was not one hiss or feedback, and every instrument was distinctly heard with enjoyable clarity and without engulfing the singer’s voice. This Paracha Entertainment presentation at the Infinite Energy Center in Gwinnett was way above par—a thorough paisa vasool entertainment event.

Shreya’s choice of songs covered not only most of the composers she has worked with, including Ismail Darbar, A. R. Rahman, Salim - Suleiman, Vishal – Shekhar, M. Keeravani, Anu Malik, Ankit Tiwari, Himesh Reshammiya, Pritam, Ajay – Atul, Sachin – Jigar, and many more, but also the veteran composers who gave us the legendary best of Lata Mangeshkar, e.g. Ilya Raja, Shankar – Jaikishan, R. D. Burman, S. D. Burman, Salil Chowdhury, Laxmikant – Pyarelal, and the likes. She acknowledged that she is a student of Lata ji and grew up listening and learning from her songs, which she adores.

With strobe lights and a huge video screen showing the live feed as well as film song video clips of yesteryears, it was an awesome sight, a harmony of lights-sound-action, and her singing sent the crowd into a dizzy fit of exclamations!

For two lilting songs, “Teri meri kahaani” and “Raabta,” she had the audience turn on their cell phone lights with the house lights dark as she sang. Suddenly it felt like you were in a place lit up by stars and the sweet voice of the nightingale was soothing you to sleep.

After a fifteen minute interval that could not end soon enough, Kinjal came on stage to render “Abhi mujhme kahin” and “Rang de tu mohe gerua.” Balaji Entertainment’s national promoter Rakesh Kaushal aka “Rocky” and Darshan Mehta along with Atlanta promoter Rahim Paracha of Paracha Entertainment all praised Shreya for the tour’s phenomenal success, saying what a pleasure she is to work with.

Of course, the Devdas songs were there. Solo violin was played with “Ek pyaar ka nagma hai,” and Shreya rendered it just like Lata ji to the “wow”s of the audience. After thunderous applause, she thanked everyone for their love and boldness to show up at the concert despite severe weather warnings, and wished everyone a safe drive back home after the wonderful evening shared.

Video:
SHREYA GHOSHAL WITH GRAND SYMPHONY IN ATLANTA
Axent Entertainment
Published on Jul 12, 2017
For the first time ever...The nightingale of Bollywood performing live with Symphony. Along with top singers and her musical journey in multiple languages and greats like Lata, Asha, Noor Jehan and more!