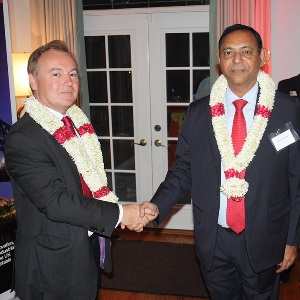 It has been a special initiative for Hon. Consul General Jeremy Pilmore-Bedford of Great Britain to observe and celebrate Diwali at the British Residence with a select group of guests. This year marks its 5th anniversary and his last year in Atlanta. Despite his intended departure to his next appointment in a few months, Atlanta’s Indian-Americans will regard him as a trendsetter for celebrating Diwali, for now, quite a few in the mainstream follow in his footsteps.

As usual, the U.K.’s Consul General and his dedicated staff pulled out all stops to keep the traditions and customs, beginning with a custom designed evite with a Diwali lamp being sent out. The guest list was checked by an Atlanta Police Department officer at the entrance, while Ms. Brittany Rose, personal assistant to the Consul General, printed each guest’s name tag. Elizabeth Reese, a GSU student-intern, not only managed most of the logistics for the gathering, but also lit candles and greeted guests at the door, placing the auspicious red vermillion dot on all the guests’ foreheads and feeding them a bite of the delicious kaju-pista barfi (cashew and pistachio desert roll).

At the British Residence itself, a rangoli designed by staffer Robert Barker adorned the concrete foyer in front of the house with lotus prints surrounding a diya (lamp) within its circle; it was drawn in the middle with chalk, but filled in with candle tea lights, burning bright. The entire walkway from the street to the entrance of the house was lit with candles. Inside the residence, tea lights illuminated all the window sills as well as the patio leading to the covered swimming pools with gates, where guests mingled.

The weather was superb to be outside in the open and the candles added to the ambience as drinks and appetizers were passed around by servers. Soft classical Indian music was piped throughout the evening while guests socialized.

At the appointed time, the Honorable CG made his way inside, inviting others to follow. There he clearly voiced his enjoyment in hosting the Diwali celebrations that he initiated 5 years ago and celebrated each year, and declared that he will leave good notes for the next CG to use to continue the tradition. He also spoke about the increasingly improving trade relations between India and Great Britain, as well as UK-USA, through Indian-American community members. He described how widely Diwali was celebrated in the UK, which is home to the second largest Indian diaspora in the world. Throughout 2017, the UK is celebrating the two countrys’ fruitful alliance with a year-long initiative, The Year of Culture, to commemorate the 70th anniversary of Indian independence. He also noted how well the festival is observed globally; the concept of light over darkness and good conquering evil is common to all.

This was followed by the exchange of fresh floral garlands, made to order, with Diwali colors of red, white, and gold, between CG Pilmore-Bedford and Shailesh Lakhtakia, Head of Chancery at the Atlanta Indian Consulate, representing Hon. Consul General Nagesh Singh who was unable to attend due to an unexpected situation. Mr. Lakhtakia graciously accepted the floral garland and placed one in return around Jeremy’s neck as well.

Prem Rahman’s dance studio disciples performed to a medley of Bollywood songs. With the guests clapping their hands in tempo, they kept up with the speed and vigor of the performance, which is so typical of the north Indian dance styles. The U.K. Consul General took a group photo with the dancers and gave each a certificate as gratitude.

The buffet dinner with quite a few options was exquisite in taste and served promptly and efficiently. Both Mrs. Amanda Pilmore-Bedford and son Alasdair played perfect hosts and exuded warmth to each and every guest in attendance.

Guests left with the hope that the tradition will continue!