Home > Magazine > Around Town > Can the One Belt/One Road initiative improve Indo-China relationships?

Can the One Belt/One Road initiative improve Indo-China relationships? 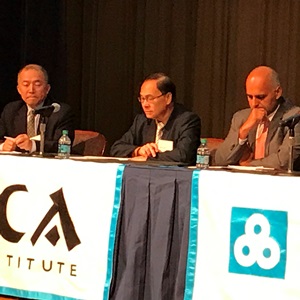 To review China’s One Belt/One Road (OBOR) initiative and to discuss the impact that a better relationship between India and China would have, representatives from India China America (ICA) Institute, Hong Kong Association of Atlanta, and the Carter Center, and several individuals from business and academic communities, all met at the Carter Center on Friday morning, September 22, 2017.

Prof. Sheth gave an overview of OBOR, “the Project of the Century,” how the initiative will impact India, and the future of Indo-Chinese relationship. The past filters of “Hindi Chini Bhai Bhai” have to be dropped, he said, so that we are not looking at the solution through past experiences. Encouraging tourism and greater cultural and educational exchanges between the two countries will allow citizens to interact and get to know each other, instead of learning through the government. He shared how capitalism, socialism, and mixed economies will impact each other. Questions from the audience were answered. 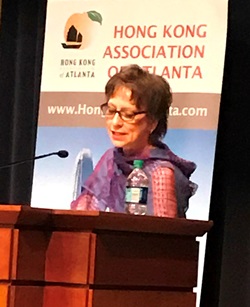 Panelists were Dr. Fei-Ling Wang, Professor, Sam Nunn School of International Affairs, Georgia Tech; Henry Yu, COO, Asian Investors Consortium; and Ziad Haider, Senior Associate in Political Economy at the Center for Strategic & International Studies (CSIS), formerly senior advisor at the U.S. Department of State. They shared concerns about the lack of understanding of how the initiative was going to work. 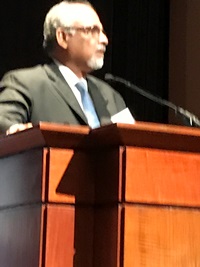 Mr. T. N. Ninan, Chairman and Editorial Director of Business Standard Ltd., the publisher of India’s second largest business daily, came from India to give the keynote speech. He agreed that it is a transformative project, extremely ambitious, on a scale that has not been attempted before. With an investment of one trillion dollars, its 900 projects involve two or three dozen countries. His concerns included the structure of the Road (the oceangoing “Maritime Silk Road’) and Belt (the land-based “Silk Road Economic Belt”), its economics, and border issues—national sovereignty issues. 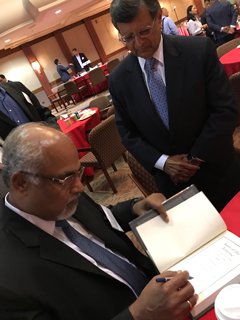 T. N. Ninan signs his book The Turn of the Tortoise: The Challenge and Promise of India's Future for Prof. Jag Sheth. (Photo: Geeta Mehrotra)

Projects are loan-based. Relationships are competitive. In order to move forward, OBOR will have to be multilateral, not bilateral, and China will have to be friendly, not hostile—that will be a breakthrough. Yet it is important for India to participate; things can be worked out. The conclusion was that we can be “cautiously hopeful.”