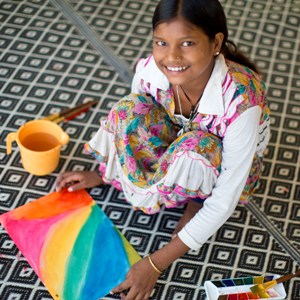 Founded in 1945 with the creation of the CARE Package®, this leading humanitarian nonprofit has been fighting global poverty; then twenty years ago, CARE moved its headquarters to Atlanta. To commemorate this special anniversary and Atlanta’s position as a gateway to the globe, CARE brought art created by schoolgirls across four continents to Mason Murer Fine Art Gallery in Atlanta. The “Through the Eyes of a Girl” exhibit opened on October 11, 2013, on the second annual International Day of the Girl, and featured 100 works by schoolgirls who, with CARE’s help, have overcome long odds to pursue their educations. The opening reception and celebration of this unique art collection included global cuisine, drinks and music. The exhibit will continue, free of charge, until October 25.

“Atlanta’s unique position as a global capital for public health, human and civil rights, and international business has enhanced our work in fighting global poverty in 84 countries,” said CARE President and CEO Dr. Helene Gayle. “‘Through the Eyes of a Girl’ gives Atlantans a unique opportunity to be inspired by some of the girls we work alongside every day and to see how our hometown is helping make a positive impact in the world.” (For videos on these topics, please see below.) 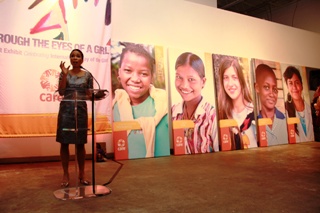 To create ‘Through the Eyes of a Girl,’ CARE sought schoolgirls from the countries of Georgia, Ghana, Honduras, India, and Madagascar. We asked them to tell us about their lives, using colored pencils, pastels, and watercolor paints. The girls, selected from communities where CARE has promoted girls’ education, leapt at the opportunity. For many, it was the first time they had ever held a paint brush or even drawn on paper. Through their own art, the girls opened their imaginations and gave us moving glimpses of their lives and daily struggles.

The International Day of the Girl was begun by the United Nations in December 2011 to focus attention on the challenges girls face around the world and to promote the fulfillment of their human rights. This year Malala Yousafzai, the Pakistani schoolgirl who was shot by the Taliban for attending classes, spoke at the UN, and in October in New York, actress Freida Pinto, Plan International Ambassador, and Reshma Saujani, Founder of Girls’ Who Code were joined by students and young activists from Pakistan, Sri Lanka, and Nepal among other countries to “erase” the image of child factory workers, revealing a hidden image of students in the classroom. This October, in addition to the art exhibit, CARE is launching an online campaign called “Keep Girls in the Picture,” designed to support girls’ education worldwide. CARE helped more than 2.3 million people gain access to quality education and technical training last year alone.

CARE places special focus on girls and women because, equipped with the proper resources, they have the power to lift whole families and entire communities out of poverty. CARE also works to promote social justice, respond to emergencies, and confront hunger and climate change. Last year CARE worked in 84 countries and reached more than 83 million people around the world.

Videos:
India: Through the Eyes of a Girl, Laxmi. Published on Oct 8, 2013
Hardoi, India
Laxmi, 12, didn't set foot in a school until two months ago. Now attending the CARE-supported Udaan residential school in Hardoi, India, Laxmi will get a fifth grade education in just 11 months, then be mainstreamed into a formal government school to continue her schooling. Laxmi was born into a house where girls were expected to do domestic chores until they are 14, then marry and move away. When a flood toppled her home last year, her parents moved away and left her with her uncle Raj. Fortunately for Laxmi, Raj believes strongly in the importance of education and enrolled her in CARE’s Udaan school, which gives girls whose educations were denied or delayed accelerated courses to help them catch up with their peers. In just a few months at Udaan, Laxmi has transformed from shy and hesitant to inquisitive and studious; as well as a gifted visual artist.
This video was screened at the "Through the Eyes of a Girl" exhibition, a collection of nearly 100 vivid, poignant works of art depicting the joys and struggles experienced by girls and young women around the world in pursuit of their education.

Interview, future in Atlanta:
“Many people say CARE is one of the best secrets in Atlanta, I want to go out there and ring the bell and let people know that CARE is in Atlanta,” said CARE's president Dr. Helene Gayle.
http://www.bizjournals.com/atlanta/print-edition/2013/09/13/care-to-raise-its-profile-in-atlanta.html?page=all