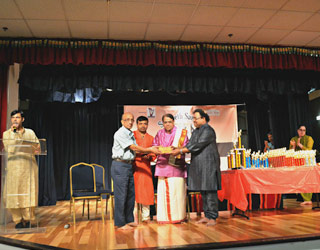 On the fine sunny morning of Saturday, September 19, 2015, The Hindu Temple of Atlanta’s auditorium was filled with young participants, their parents and teachers anxiously waiting for ‘Carnatic Samraat Music Competition’ to begin.

The competition was hosted by Atlanta’s premier Indian classical music organization, CAMAGA, in collaboration with Sri Shankara TV and Abhayam Creations of Chennai. The competition is intended to select the most proficient and talented  Carnatic musician from young artistes across the globe. In addition to Atlanta, the competition will be held in other U.S. cities such as Chicago, Detroit, New York, Seattle, San Diego, and San Jose and in countries such as Singapore, Dubai, and Australia.  The winners from each of the U.S. regional cities will compete on October 10th in Delaware to select the U.S. winner.  Eventually, the global final will be held in India to award the title of “Carnatic Samraat.”

The participants from Atlanta, numbering around 150, varied in age from five to 30 years.  They were grouped into two categories––Bala Samraat and Yuva Samraat (juniors and seniors)––based upon their years of experience.  Group participants, each group consisting of between eight and ten vocalists and instrumentalists, performed as a choir or a symphony.  After each group’s presentation, the rapt audience showed its appreciation with standing ovations.

The master of ceremonies for the event, Sri K. N. Shashikiran, an illustrious vocalist himself, conducted the entire competition flawlessly and with patience.  He encouraged the young performers to do their best and gave excellent feedback to each participant.

>Dr. Ram Sriram, President of the sponsoring organization CAMAGA (Carnatic Music Association of Georgia) extended his gratitude to the volunteers who had worked tirelessly for three months to stage the competition. He stressed that such competitions are essential, not only to give young Indian-Americans a stage to perform but also to get them interested in our culture and heritage.  Dr.  Sriram exhorted parents and teachers to encourage their children to also attend concerts by leading professional musicians organized by CAMAGA several times during a year in order to understand the subtle nuances of performing.