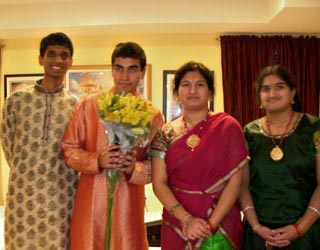 On the evening of January 26th, amidst scenes of the Mahabharata hanging on the walls, over 50 Carnatic music lovers sat comfortably on the floor before the basement stage of a home in Johns Creek, where they were treated to a wonderful classical music concert given by local students.

At first, the deep, confident, sonorous twang of two veenas filled the air. Fingers of the right hands of the two sisters (Shree Varshenee and Nitheyaa Shree) stepped forward and back as the left hands stepped up and down from fret to fret. The sisters could have themselves stepped out of the paintings around them, from the courtly images of Krishna’s mother and the royal activities of the gods.

Between the important business of cookies and crayons, a little girl in a richly colored silk blouse and skirt patted out the beat of the music with energy and confidence. The audience kept time to a series of rhythms on the mridangam accompaniment and solo (expertly played by Arvind Narayan), their hands flipping in the cycle of beats with fingers moving individually and together with beat and swish.

The Shree Sisters had begun the concert with the popular varnam Ninukori in raga Mohanam. After a piece for Lord Ganesh came a song to honor Goddess Saraswathi, the deity of all cultural arts and mother of the veena. The melodic pieces continued flowing from a leisurely dancing to a mad twirl. Madhuvanti crept in amongst the Carnatic ragas, just as some in the rapt audience were not South Indian. The sisters played the ever popular romantic melody Jagadhodharana and concluded with a piece composed by their guru which was well appreciated by the audience. The highlight was Samajavaragamana in Hindolam, the alapana by Nitheyaa Shree (the younger sister) highlighting the intricate phrases of Hindolam, and the thanam by Shree Varshenee (the older sister) showing its elegant tones.

Manodharmam (creative expansion of the raga) was enhanced with two vainikas (veena players) vying to see which could play the longest kalpana swarams. The mridangam player, Arvind, had his own way of accompanying each sister, adding a twist to the performance. The sisters thanked their mother Indumathi Ramesh and their guru Priya Chandrasekaran.

This program was followed by an energetic Carnatic violin performance by Aditya Krishnan. He commenced with Nattakuranji varnam followed by a fast paced kriti in Bahudari. His invocation to Ganesha in raga Chakravaham and intricate rendition of Mohanam were well appreciated. Kalpana swaras were brisk and expertly rendered. With Krishna and Arjuna’s horses racing on the wall behind, the violin and mridnagam raced in rapport as well. Thyagaraja’s Todi pieces were played with ease, and the Hamsadhvani (“sound of swans”) was worthy of playing in Krishna’s court. A swarajathi of seven beats in raga Bhairavi was much appreciated, as was a beautiful Nalinakanthi. Aditya concluded his portion of the concert with Mangalam.

Each half of the program was ninety minutes, performed as professionally as could be desired, and by students only of middle school, high school, and college age, but with many national events under their belts. Aditya, in fact, took a first place in instrumental at the 2012 Chicago Tyagaraja Utsavam Music Competition—though he is now only a sophomore in high school! The Shree Sisters both are Carnatic Music Idol 2012 finalists, which shows their talent not only on veena but as accomplished singers.

Music lovers in the audience lamented the paucity of concerts and appreciated the skill of these young musicians. The Ramaswamys were thanked for hosting and presenting a delicious dinner after the concert.

Bios:
Emcee Varun Iyer introduced the artists:
• On the veena were Shree Varshenee and Nitheyaa Shree, who are known as the “Shree Sisters.”
o The Shree sisters started their music journey with Carnatic vocal lessors at the ages of 7 and 5, respectively, under the guidance of Srimathi Kasturi Bhat of Canton, Michigan. After moving to Georgia, they both started learning from Srimathi Kala Vasudevan. Nitheyaa had also started learning from Sri Palakkad Ramprasad. The two sisters are now under the guidance of both Srimathi Subhashini Krishnamurthy and Sri Salem Shriram.
o At the ages of 9 and 7, the Shree sisters ventured into the world of Veena. This journey began with initial lessons from Srimathi Jaya Kottamasu of Atlanta, Goergia. They later on took lessons from Srimathi Nivedita Shivraj of Queens, NY, who is a direct disciple of Sri Chitti Babu.
o They are currently receiving advanced training under Srimathi Priya Chandrashekaran of Atlanta, GA who is a disciple of Srimathi Ranganayaki Rajagopalan and Srimathi Kamala Aswathama. Both sisters are also proficient on the piano and cello.
o Shree Varshenee and Nitheyaa Shree have performed in many social and cultural events starting at the ages of 11 and 9, respectively. A few such programs include FeTNA, Sri Ahobilla Muth Acharya Day, Composers Day, as well as several other local and national events.
o Shree Varshenee is a junior in high school and Nitheyaa Shree is an 8th grader in middle school.

• On the violin was Aditya Krishnan, a sophomore in high school. He first started his foray into Carnatic music and the violin with his mother, at age 4. He later took lessons from Sri Deepak Murthy of Atlanta and has received training from many others, including Shri Nagai Shriram of Chennai, India. He is currently receiving advanced training from Kalaimamani A. Kanyakumari of Chennai.
o Aditya has performed at several venues including the Kennedy Center of Performing Arts in D.C., North Carolina Youth Classical Arts, Cleveland Aradhana, and several local events such as Composers Day and Annamacharya Day.
o Aditya won first place for his violin performance in the instrumental category at the 2012 Chicago Tyagaraja Utsavam Music Competition. He is also proficient in playing Western classical violin and has been a part of the Fulton County Elementary and Middle School Youth Orchestras for several years.

• On the Mridangam, as accompanist for the entire concert, was Arvind Narayan. Aravind began his training at the age of 8 from Sri Subra Vishwanathan. He later took lessons from Guruswamy and is now being trained under Sri Santosh Chandru.
o Arvind has performed at several venues, such as Nashville Aradhana, Cleveland Aradhana, and several local concerts. He is also part of a fusion music group at Georgia Tech, where he is a first year student.

The 90-minute veena concert included the following pieces.
Ninnukori, which is a varnam composed by Ramnad Srinivasa Iyengar in ragam Mohanam and talam Adhi.
Siddhi Vinayakam, in Shanmughapriya. This song to Lord Ganesh is a composition of Muthuswamy Dhikshitar and is in Roopaka talam.
Shobillu Saptaswara in Jaganmohini ragam, Roopaka talam, and composition by Thyagaraja.
Puliyur Duraiswamy Iyer’s composition titled Saraseeruha, in ragam Nattai and talam Adhi.
An Annamaiyya composition in ragam Shri: Vande Vasudevam. This song is set to Kanda Chapu talam.
Raghuvamsa Sudha in Kadanakuthuhalam ragam, talam Adhi, and composed by Patnam Subramanyam Iyer.
Samaja Vara Gamana, a composition of Thyagaraja, in Hindolam set to Adhi talam (highlight of the concert).
Jagadhodharana in ragam Kapi and talam Adhi. A composition of Purandaradasar.
A Tamizh padam composed by S. Cidambaram. Kanda Naal Mudhalai is set to ragam Madhuvanti, a Hindustani ragam that has been borrowed into Carnatic music, and is in talam Adhi.
A thillana in Khamas ragam, Adhi talam, a composition of Patnam Subramanyam Iyer.
A Western note composition that has been composed for the veena by their guru, Srimati Priya Chandrashekaran.