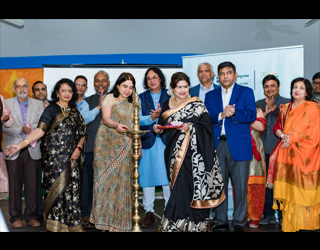 On the bright Sunday afternoon of April 17, 2022, hundreds of people gathered at India American Cultural Association (IACA)’s ICRC auditorium to celebrate Parakram Diwas hosted to commemorate the 125th birth anniversary of Netaji Subhas Chandra Bose, the famous freedom fighter and commander of the Indian National Army (INA). This event was organized along with the Consulate of India in Atlanta as part of Azadi Ka Amrit Mahotsav, the yearlong celebrations to commemorate India’s 75th Independence Day. Geetanjali Talukdar, a member of IACA, took the responsibility of executing the program.

The ICRC auditorium was set to welcome the audience on April 17, 2022 at 4 pm. The audiences were greeted by the IACA volunteers and led to the beautifully decorated lobby in the colors of the Indian flag: saffron, green, and white.

A video showcasing Netaji’s life played in the background. This rare and precious video was courtesy of the High Commission of Malaysia and its officials, Narayan Hebable and Skanda Prakash. An exhibition of photos from Netaji’s life along with his famous inspirational quotes was on display along with some rare books on his life, his participation in the struggle for Indian independence, and his journey as the Commander-in-Chief of INA.

Consul General Dr. Swati Kulkarni graced the occasion along with Rajib Bhattacharya and Madan Ghildiyal from the consulate.

As the program commenced, the emcee and coordinator, Vishwanath Ganti, set up the stage to begin. Ani Agnihotri, Vice-Chair of BOD, IACA welcomed and thanked everyone for attending. He then introduced the program coordinator Geetanjali Talukdar who also welcomed the audience and said a few words about Subhas Chandra Bose.

The program started with the lighting of the ceremonial lamp by Dr. Kulkarni who was the chief guest for the evening. She was joined by all BOD members of IACA along with program directors and presidents of all the participating organizations.

In her speech, Dr. Kulkarni spoke of the many sacrifices that Netaji made. Her speech was followed by an address by Tushar Sanghvi, Chairman of BOD, IACA; Chand Akkineni, President, IACA; and Agnihotri.

A group of singers from Sur Sangeet Choir Group gave an outstanding performance which included songs like Ekla Cholo Re and Kadam Kadam Badhaaye Ja inspired by Netaji.

Anoop Kapoor, Member of BOD, IACA, spoke of his grandfather Jay Dev Kapoor who was sentenced to Kala Pani, the colonial prison for freedom fighters under the British rule. Saikat Chatterjee, a member of Purbasha, shared his family’s connection with Netaji.

As the program drew to a close, IACA thanked all the donors, volunteers, and performers for their help. Geetanjali Talukdar, the program director, said, “I am honored to organize this prestigious event. This is the first time that Parakram Diwas has been staged and we hope to stage more programs like this in the future.”