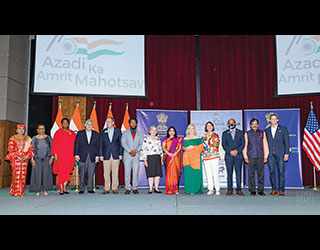 India’s 75th Independence Day was celebrated in the Consulate on August 15, 2021. The morning event saw the unfurling of the flag. It was celebrated both in-person and online with fanfare and enthusiastic participation by the Indian diaspora. Consul General Dr. Swati Kulkarni hoisted the National Flag and read out the message by the President of India. The National Anthem was sung by over 100 people who attended the celebration.

[Left] Consul General of India in Atlanta, Dr. Swati Kulkarni, with dignitaries and community leaders on the occasion of 75th Indian Independence Day.​ 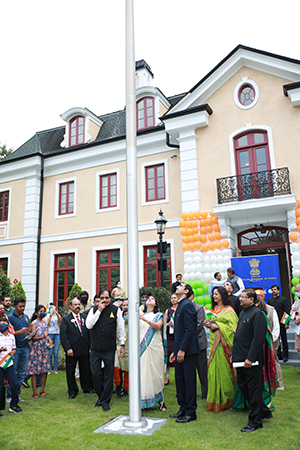 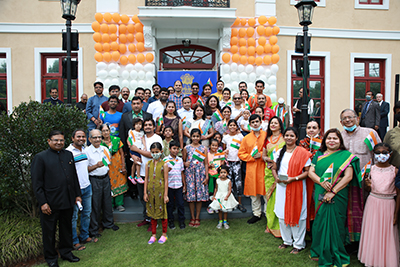 Speaking on the occasion, Dr. Kulkarni highlighted the achievements by India in various fields and its democratic journey of 75 years. She also released two books, Junction Immigration: Insights Gained from Real-Life Distress Situations which is a compilation of distress cases that came to the notice of the Consulate and lessons learned from them; and Indian Investments in the South-East U.S.A. that showcases the Indian investments in various sectors and their contribution to the local economy.

[Right] Dr. Swati Kulkarni with community members at the Consulate. 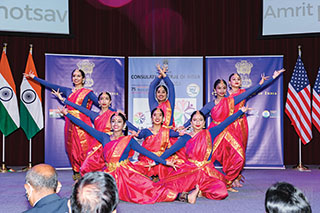 The Consulate building was lit with tricolor on the eve of 75th Independence Day, even as events were organized around the city to coincide with the occasion.

The iconic Freedom Hall, as well as the Gandhi Statue at The King Center which part of Dr. Martin Luther King Jr. National Historical Park in Atlanta, was illuminated with the Indian tricolor. Dunwoody Baptist Church, Atlanta, also celebrated India’s 75th Independence Day on August 14, at the church campus, and the Indian flag was hoisted on the occasion. Dr. Kulkarni was the chief guest at the event which was attended by over 300 people. 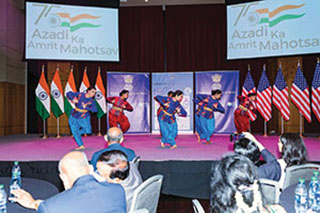 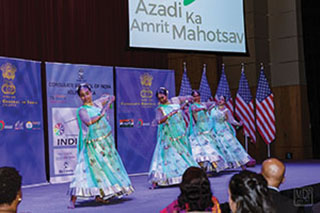 Azaadi ka Amrit Mahotsav launched by PM Modi on March 12, 2021, in India, was the theme of the Association of Kerala Medical Graduates (AKMG)’s 42nd Annual Convention on August 13 in Atlanta which was attended by Dr. Kulkarni as the Chief Guest. Under the same umbrella theme, Georgia Indo-American Chamber of Commerce (GIACC) and Gwinnett Chamber of Commerce signed an MOU on August 12 in the presence of Dr. Kulkarni. This alliance will promote constructive business engagement between India and Georgia. 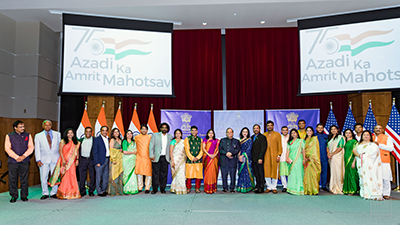