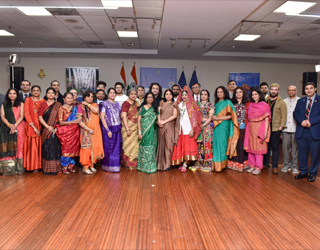 [Left] Consul General Dr. Swati Kulkarni with Sandhya Bhagat, Founder of Dhoop Chaoon, and other members of the theater group.

On January 10, the Consulate General of India in Atlanta celebrated World Hindi Day. The event began with opening remarks from Deputy Consul Madan Kumar Ghildiya that highlighted the importance of Hindi
as the national language of India and the importance of promoting the Hindi language in the U.S. These remarks were followed by other messages which pointed out the key role Hindi speakers played in the fight for Indian independence; the influx of foreigners learning Hindi in an attempt to engage with Indian culture; and the responsibility Indians have to speak Hindi, and to connect to India through its language.

Consul General Dr. Swati Kulkarni, along with Sandhya Saxena Bhagat of Dhoop Chaoon theater group, then lit an oil lamp to officially start the event. In her speech, she emphasized the beauty of the Hindi language, the dignity and status brought to the language by its poets and writers, and the history behind the language. She shared that on January 10, 1979, World Hindi Day was celebrated for the first time; and that between December 12 and January 10, various poetry, singing, and debate competitions are held to showcase the artistry of the Hindi language. She urged the Indian diasporic community to come together and encourage one another to speak Hindi and help in spreading it.

The event was emceed by Bhagat and Anil Jaswani, a member of Dhoop Chaoon theater group. Bhagat shared a short poem in Hindi about staying safe during the pandemic. It was followed by some remarks from Sanjeev Agarwal, Director of the Atlanta chapter of the International Hindi Association, about his love for Hindi.

The event featured a variety of performances ranging from short speeches to short films to skits. The students of the Hindi U.S.A. School in Atlanta performed a play called Bharat ki Udaan, Vignyan ke Saath which highlighted the feats of Indian heroes such as Maharishi Charaka, A. P. J. Abdul Kalam, and Kalpana Chawla. Brajesh Samarth, a poet and Hindi-Urdu lecturer at Emory University, shared two of his poems. Poet Tanuja Pradhan gave a short speech on the beauty and unity of India and performed a song. A short film about students in a Hindi class called Natkhat Rangeeley which was written by Sandhya Bhagat, directed by Shankar Mahadevan, and presented by Dhoop Chaoon group, was shown to the audience. The Dhoop Chaoon group also performed another play written by Bhagat called Gadbad Ghotala, which highlighted Hindi’s ability to unify Indians of all cultural backgrounds. Among the Dhoop Chaoon members who participated were Muhammad Asani, Tanuj Puri, Asha Gupta, Asha Sharma, Rita Kaphahi, Chandran Odh, Meenakshi Iyer, Sarika Jaswani, Manjusha Verma, Kamlesh Chugh, Neev Seedani, and Raj Seedani with backstage help by Anil Bhagat.

At the end of the event, all performers received certificates for their outstanding performances and cultural contributions. This World Hindi Day celebration was part of the Azadi ka Amrit Mahotsav initiative to commemorate India’s 75 years of independence.