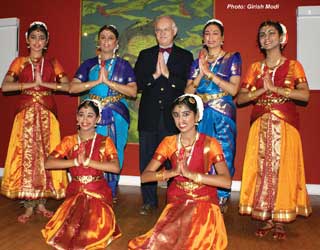 Oglethorpe University Museum of Art’s Spring cultural and educational programs included an Indian art exhibition, lectures and a dance recital. Chandrika was invited to perform in front of a mostly American audience consisting of faculty, community and museum members.

The program started at 7:30 pm and lasted over an hour. Chandrika and Nisha performed the invocatory dance and prayed to Lord Ganesha to remove all obstacles and to make the show a success.

After the students demonstrated various hand gestures and their uses, Trisha Dalapati gave a demo of the story from the Ramayana that was to be danced next—a Sabdam or interpretive dance. The hall’s red walls were decorated with figurative paintings by various Indian artists, giving an artistic ambiance. The audience seemed mesmerized by the dancers’ colorful costumes laced with gold and silver threads, dazzling jewelry, intricate footwork, and hand and facial gestures with every taal of the prerecorded music.

In the third item, Mahishasura Mardini, Chandrika performed a solo, telling the virtues of goddess Durga who rides the lion and who slew the buffalo-headed demon, Mahishasur. The fight between Durga and Mahishasur was effectively brought out through a jati or syllable sequence.

The Snake dance was a solo performance with supple body movements by Nisha. It depicted the snake with a poisonous fang that adorns Lord Shiva’s matted locks. “O Snake, dance happily without fear,” the lyrics said.

After a demo on dance steps in Bharatanatyam and a jati conducted with cymbals by Chandrika and performed by Pragya, the next item was a tillana in which Smriti and Pragya performed with a fast tempo and lightning footwork.

The last item of the evening was “Vande Mataram,” a dance in salutation to Mother India with music composed by A. R. Rahman. All the girls danced gracefully to the lilting tune and the patriotic lyrics and were led by Chandrika holding the Indian tricolor flag.

Chandrika gave a vote of thanks to Mr. Lloyd Nick (the director of the museum), Mr. Narsi Narasimhan and the audience.