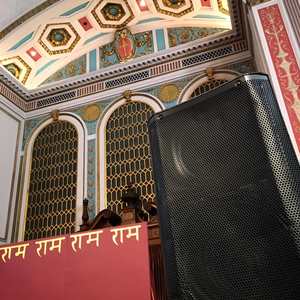 (Left) Inside the Church on Ponce & Highland, during the 10th ChantLanta festival.

ChantLanta’s main concert was with Krishna Das, an American who was inspired by Ram Dass and his guru Maharaj-ji and who has been recording albums of traditional Indian chants since 1996. ​He also gave a workshop at Yugal Kunj.

On Saturday, March 9, the venue was busy with performances, workshops, and family activities on all three levels of the building. The first performance in the sanctuary was by Kashi Kirtanwallas, who invoked Ganesha, Shiva, and Hanuman, among other gods, with their chants. Kirtan is a central part of the festival which was created by musicians who wanted to bring the energy and crowd participation of kirtan singing to a larger audience.

Over the years, ChantLanta has grown, and the activities are inspired by spiritual practices from around the world. Some of the workshops on offer this year were Chantasana: Evoke Ma Durga, Dances of Universal Peace, Sufi Trance Drumming, and Tribal Revival with Tom Blue Wolf.

During the yoga session with chants to Durga, teacher Shonali Banerjee explained that the energy represented by Durga was available to all, irrespective of one’s religious affiliations.

The Dances of Universal Peace workshop was about circle dances. Newcomers joined experienced dancers, erasing the distinction between audience and performers. Participants moved in different rhythm patterns around musicians in the center. The occasional missteps and confusion led to lighthearted moments between strangers who had come together to be part of this community. The songs included translation of Kabir’s verses and chants to Radha-Krisha.

Tom Blue Wolf, a Native American teacher spoke about the creation story of his people, the AniCoosa and how their ancient wisdom can help us create better relationships among each other and with nature. 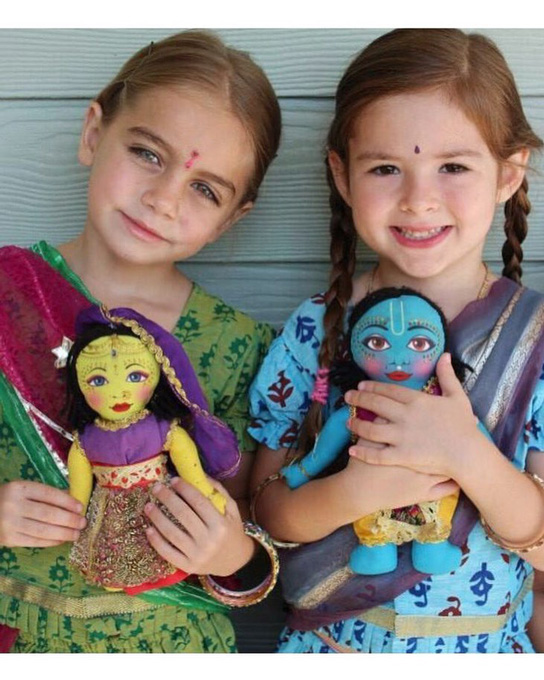 Sewa Foundation USA was one of the sponsors, and Radha Krishna Dolls of Love was one of the vendors. The event drew people of all ages, ChantLanta regulars as well as newcomers. Workshop coordinator Stan Holt mentioned that the festival is run entirely by volunteers. This year’s charity partner was Camp Cadi, a summer camp for girls traumatized by sexual abuse. From donations, workshop registrations, silent auction, the sale of ChantLanta shirts, water bottles, and CDs from local bands, and from the screening of the film Mantra: Sounds into Silence, ChantLanta raised $12,000 for Camp Cadi, which is ChantLanta’s highest donation to date, and which brings their 10 years of charitable donations to over $50,000.

Sweetness and service was felt all weekend long. ChantLanta director Stephanie Kohler concluded, “May [ChantLanta and its community] nourish and inspire deeper connections, more nuanced understandings, and more inspiration to create the world in which we all thrive.”