Chapters of Her Life opens to full house 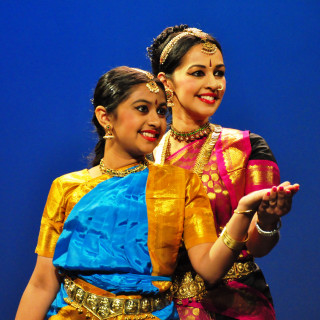 "Everything in the universe has rhythm. Everything dances." Maya Angelou’s quote summarized the theme of Chapters of Her Life, a thematic dance show directed by Preeti Shah, which presented over fifty dancers from her Natyam Arts Academy. This ticketed fundraiser on October 27th at Southern Polytechnic Theater, for St. Jude Children’s Research Hospital, was sold out several weeks prior to the show and opened to a full house with standing room only!

Chapters of Her Life embroidered tenacity, ferocity, and the beauty of a woman’s life through music and movement. Prior to the show, Paradise Biryani Pointe had organized complimentary tea and snacks for all guests. Archith Seshadri and Jayashree Bandi emceed the show and guided the audience through three chapters of the theme; their speeches peppered with Maya Angelou’s poetry. Two of the younger students from the Academy, Sainath Rajendrakumar and Akanksha Sharma, spoke to the audience in their own words about the importance of having an organization like St. Jude. Ramya Prabhakar, accompanied on guitar by Parth Viswanathan, sang an inspirational opening song.

Preeti Shah’s dramatic prelude was the poignant “Guru Vandanam” in which she proved once again that she is poetry in motion. Preeti not only performed most of the dance pieces, she also executed her nattuvangam to two pieces with live orchestra. From concept to choreography to costume designs, Preeti has worked on this show for more than a year. 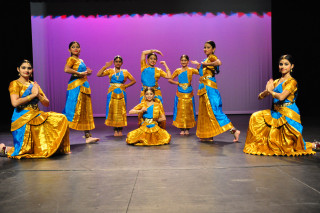 Chapter one began with a young girl’s life when innocence and ignorance come together as seamlessly as Beethoven and Bharatanatyam. Seventeen girls performed a traditional allarippu with Preeti Shah on nattuvangam, and Subra Viswanathan on mrudangam while Parth Viswanathan playing “Für Elise” on guitar.

Chapter two moved on to adolescents who dance without inhibitions, revel in their confidence, beliefs, and talent. The “Avatar” piece had a surprise element, where students formed the Gitopadesh scene effortlessly with props in total darkness! When the lights came on, the audience could not help but give these young girls a thunderous applause. The supporting cast featured Shreya Desai, Aishwarya Duggirala, Soujanya Duggirala, Manasi Gali, Sunrita Gupta, Ria Joshi, Anila Kankipati, Shreya Nainwal, Prisha Rajasekaran, Nethravalli Shah, and Shreshtha Shah.

Chapter three portrayed a mature woman who takes on demons while retaining poise and exhibits grace under pressure. In this segment Preeti Shah performed with her senior students to unique contemporary Carnatic music. The unexpected blend of Bharatnatyam to this genre of music amazed the audience. “Preeti’s choreography is heaven on earth,” commented Srilakshmi Rachapally. Preeti’s facial expressions, clarity of movements, and humility inspire her students in every show. 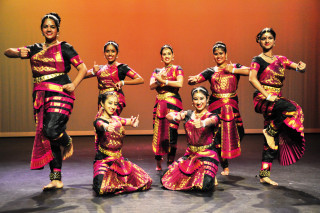 Preeti Shah with the principal dancers of “Chapters of Her Life.”

“Unison in Rhythm,” “Eternal Potency” and “Power of Prayer” showcased intricate footwork, dramatic poses and esoteric mudras. Aditi Acharya, Meena Balasubramaniam, Nalini Birbal, Roshni Kailar, Meghna Mahadevan, Tanmayi Pai, and Lavanya Ramakrishnan, the principal dancers of the Academy, did a splendid job keeping pace with their guru on stage and making a mark for themselves. The audience cheered and sustained their applause for “Power of Prayer” in which Preeti’s masterful choreography and performance by the principal dancers were appreciated.

An unusual and informative feature was a program with Dr. Nazeera Dawood, Health Promotion Program Manager, Fulton County Department of Health and Wellness; Dr. Hansa Bhargava, WebMD's expert and featured pediatrician; Dr. Renee Anushka Alli, expert medical reviewer of content on WebMD FIT; and Dr. Nazneen Desai, Pediatrician. They conducted a short panel discussion on the impact of childhood cancers on families and the nation, the latest research news, how research plays a part for treatment, and how the audience could help in various ways. A special pamphlet prepared by the show’s Volunteer Chair Vedika Rajasekaran had been distributed to the audience with these facts.

Chapter three continued with “Fighting Inner Demons,” which featured Aditi Acharya as the demon and Preeti Shah as the character of courage. The question-answer sequence between guru and shishya was impressive. The finale of the show was a mother-daughter duet piece by Preeti Shah and Nethravalli Shah. Aptly titled “The Next Chapter,” mother and daughter performed in complete synchrony. Nethra’s facial expressions and footwork took the audience by surprise and she shows great promise for a future in Bharatanatyam. Watching the fifth generation in her family take the stage brought tears to Preeti’s eyes.

Preeti addressed the audience, saying, “Why do we dance, Why do we breathe? I always ask my students this. Don’t dance for applause, don’t dance to prove something, don’t dance for your happiness. Instead, dance to bring joy to those who are not as fortunate or blessed like you. Let’s make dancers out of everyone. Let the jingles from our salangai ring all around the world to celebrate good health and life.”

Paradise Biryani Pointe, Indian Bazaar, Kumon of Dunwoody, Hair Images, the Yellamanchili Family, Studio!, Eric Campbell, Yummy Foods Limited, and Homework Center were sponsors for this spellbinding show. Despite numerous events around the city that night, over 500 people came to this audiovisual treat. One guest was quoted as saying, “Where else would you get fantastic performances coupled with a great cause and complimentary high tea service in this city?” Proceeds from this show benefitted St. Jude Children’s Research Hospital.

Website Bonus Feature: Please note that the print and digital issues of this month's Khabar magazine contain a shorter report of this event, whereas the website contains a more detailed report.