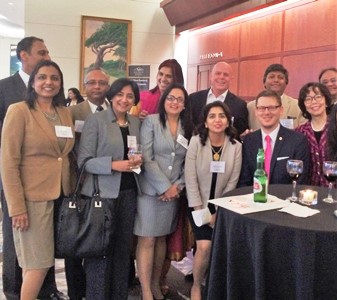 India China America Institute (ICA) at Kennesaw State University hosted Chindia Summit, “Footprint of India and China on the rest of the World,” at the Cobb Galleria on March 9, 2016. ICA is a think tank for the burgeoning trilateral relationship between India - China – USA.

An earlier ICA event in the series was a profound presentation by Dr. Rajiv Dhawan, Director of Econometric Forecasting at Georgia State University, at the Sheraton on Hammond Dr. Holding no bars, Dr. Dhawan laid down the hair-raising reality as he opined from data gathered from a large range of resources. China’s impact on the major parts of the world is significant. He stated that albeit most people are delighted to save the few USD at the gas pump (referring to the recent drop in gas prices), they are not aware at all of their 401K’s transitioning to 401A’s (referring to value of their retirement savings also dropping significantly). He warned, “Do not worry about the ROI but pay attention to ROM (Return of Money) depending on where you have vested your life’s earnings.” There are international funds hawking an annual 50% return, but is there a surety of returning the original sum? This complexity arises out of that nation’s heavy indebtedness to China and China’s economy being highly volatile.

Panel discussions covered Chindia Diaspora, Globalization of the Chindia Enterprises, Climate Change in Chindia, and Contemporary Chindia and America Softpower. The audience learned of behind the deal scenes, diplomatic hurdles, beleaguered bureaucracy, uncharted growth, service heavy versus manufacturing heavy and vice versa challenges in the region that impacts the world, mean age and demographic advantages of the world’s workforce, and more—with much background information not discussed in the media.

Dr. Jag Sheth, founding member of ICA, made his remarks over a video stream. His analysis about the geopolitical advantages and disadvantages of these 3 mammoth economies and their strategic and yet wanting triangulation of relationships, was certainly awe inspiring. Consul General Singh noted that China is India’s largest trading partner and that India and the US are certainly headed in the right trajectory in their relationship.

Links:
*http://dga.kennesaw.edu/ica/chindia/speakers.php
*https://www.facebook.com/India-China-America-ICA-Institute-402262569955622/
*http://ksusentinel.com/2016/03/15/summit-unites-chindian-cultures/
*Mar 1, 2016: http://www.globalatlanta.com/chindia-summit-examines-effects-of-chinese-indian-expansion/
*Mar 18, 2016: "Summit: China, India Cooperation Brings Opportunity, Challenges for U.S." :
GlobalAtlanta.com [The article above appears only on the website for April 2016, not in the April print/digital issues.]