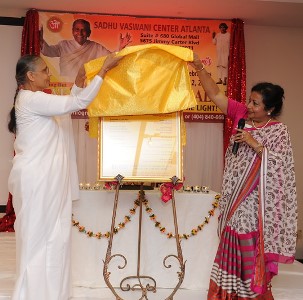 On July 19, 2017 celebrations began with Silver Satsang: senior citizens were invited to Ashiana to see a DVD on Dada’s life, followed by lunch.

Then on July 23, Atlanta community leaders participated in a unique program Aao Jyot Jagaein, “Come let’s kindle light,” at Global Mall’s Impact Banquet Hall. Twelve leaders represented their community and lit a candle representing one of the twelve virtues for the centenary year program. A year-long celebration program was shared with the community so that everybody will have a chance to be part of this auspicious celebration.

After a warm welcome by emcee Anjali Nagrani, the program started with a Gita audio by Sadhu T. L. Vaswani, and Kirtan by Asha Advani, Neera Bahl, Khyati Bhavin Doshi, Reva Handa, Alka Kotak, and Roma Punwani. Emcees Anjali Nagrani and Jashmi Karla introduced the light bearers along with the virtue and the community they were representing. 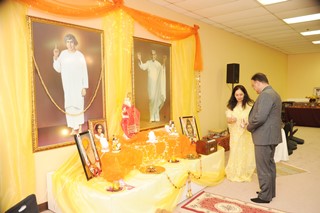 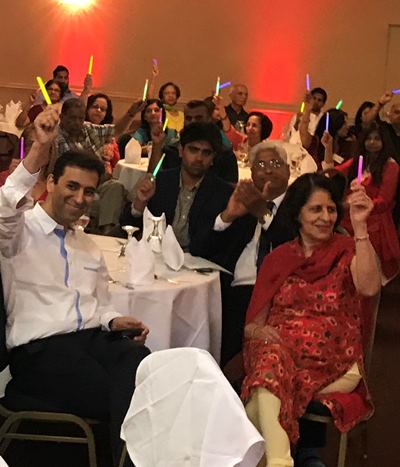 As the 12 light bearers walked down the stage to light their candles, Neera Bahl sang “Jyot Se Jyot Jagate Chalo” and the audience raised lit batons.

Keynote Speaker Dr. Jagdish N. Sheth, Founder of the Center for Relationship Management at Emory University and Founder of the Center for Telecommunications Management at University of Southern California, lit the middle lamp representing the bridge between East and West. He built the bridge also by sharing how Dada’ s teachings solve current-day problems: vegetarian diet improves health, and simple life style changes impact the economy.

Unveiling of the Centenary Year Program was done by Hansa Ben Patel of Brahma Kumaris, and Neera Bahl, chair of the event. Mr. Ashok Lalwani, CEO of Sadhu Vaswani Center of NY/NJ and president of SVC Atlanta along with his wife Sangeeta had come from New Jersey to be part of the program. Ashok shared briefly how Sadhu T. L. Vaswani started St. Mira’s School with one ana (1/16 rupee before Independence) in 1938. His hope was in women to bring us from darkness into light as man has blundered enough. He shared his favorite 4-minute video with people sharing what Dada means to them. “Thought for the Day” was read by Geeta Mehrotra from Nuri Granth, the book of songs. A moment of silence was observed and then came the much awaited program of the evening, a recorded discourse in English, “Why Not Turn to God?” by Dada J. P. Vaswani.

Thanks were expressed by Suraj Amarnani, Secretary of SVCA. Consul D. V. Singh was felicitated by Kavita Tolani. Every family received a gift bag with two books, Magic of Forgiveness and Face It with Love by Dada J. P. Vaswani, and a magnet calendar of the centenary year. Pledges for the Moment of Calm were collected.

On Wednesday evening August 2, Global Forgiveness Day, the Moment of Calm was observed by about 130 devotees who gathered also to offer to prayers to God for Dada J. P. Vaswani and his presence in their lives. The evening started with havan prayers, audio recitation of Gita by Sadhu T. L. Vaswani, kirtan, a message from Dada J. P. Vaswani was read by Priya Advani, and a DVD discourse by Dada J. P. Vaswani was watched. Bhagu Ahuja was felicitated for his dedication to SVCA.

At 2pm local time on August 2 around the world, including at SVCA, a Moment of Calm was observed for 2 minutes, and prayers were said together to forgive and seek forgiveness, to breathe out an aspiration for peace and love. People pledge to participate in this way: in fact, 1,87,48,881 pledges (one crore, eighty seven lakhs, forty eight thousand, eight hundred and eight one) were collected by Sadhu Vaswani Mission, Pune in honor of Dada’s birthday.