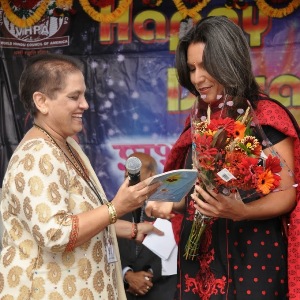 Kusum Khurana presenting bouquet and a book to US Congresswoman Tulsi Gabbard.

The World Hindu Council of America (VHPA) Atlanta chapter hosted its annual free public Diwali "Festival of Lights" Celebration showcasing the rich cultural diversity of India, on October 27, 2013, at Centennial Olympic Park in downtown Atlanta. The event saw an attendance of about 1500-1700, attracting patrons as well as curious tourists and passers-by.

Young kids performed a dance on “Rang De Basanti,” which was followed by a traditional fast bhangra by another group of children trained by Shri Vishal Sharma, former captain of the UGA bhangra team. Volunteer teachers of Balvihar (Cobb) presented an impromptu dance, greatly appreciated by the organizers as they waited for the scheduled artists to appear. Kalaivani Dance and Music Academy students performed a traditional Bharatnatyam piece and a fusion dance to the music of “Talking Drums,” which got an encore due to popular demand. 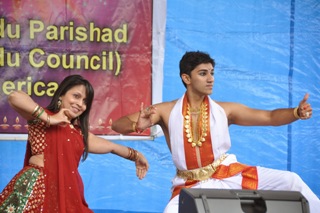 Talented ladies from Ananda dance group performed a fast paced fusion dance and a bhangra, the irresistible beats prompting many in the crowd to join in the dance on the green lawns of the park! Mahek Shah of Mahek Dance Academy and Aadithya Prem, talented Bharatnatyam dancers, presented dances, one of which, a duet, summarized Ramayan's story, with music in a rare raga called Suposhini. A solo dance by Aadithya was a fusion on “Thaye Yashoda” summarizing the story of Krishna killing Kaliya. A Bharatnatyam solo by Mahek's 6-year-old daughter got a huge round of applause. Sagnika Mukherjee presented a three-dance medley set to Rabindra Sangeet, her elegant footwork, fluid movements, and facial expressions beautifully in sync with the melodies, making the dance seem almost effortless.

Between colorful dances came melodious songs from some great local artists. The father-daughter duo, Shyam Gupta and high school sophomore Vidushi Gupta, presented an entertaining medley of songs depicting a range of moods. Sarayu Narayan, another high school junior, with her sweet voice did justice to popular songs like “Mere Dholana Sun.” Indian Idol contestant Swati Mishra brought the house down, rather, up, on the stage, with her lively rendering of the latest Hindi film numbers, with members of audience joining her on stage. Volunteers from Balvihar, Shri Raman Shivram and Shri Nishith Oza, took everyone down memory lane with tributes to the legendary Manna Dey, who passed away recently. The audience was treated to some great duets and solos in Hindi, Kannada, Tamil, and Telugu by DJ for the event, Srinivas Durgam, and his singing partner Bhanusree, who sang the song “Gumsum” from movie Paa in five different languages. The program was emceed by witty Sabitha Ragunathan of VHPA Atlanta and copy editor of Hindu Vishwa magazine.

Two illustrious guests participated: Shri Rudi Webster, a famous cricket player, author of numerous books, and current Ambassador to US from Barbados; and US Congresswoman Tulsi Gabbard, representative from Hawaii and the first Hindu member of Congress. Mr. Webster spoke of Sachin Tendulkar and received enthusiastic applause from the cricket-crazy Indian audience. Tulsi Gabbard's presence had an electrifying effect on the crowd, with her greetings of “Jai Shri Krishna" from the podium, and talk of Geeta and Karma Yoga in her address. Notably, Ms. Gabbard, a practicing Hindu and a vegetarian, is the youngest legislator ever elected in the history of Hawaii and the youngest woman elected to state office in the nation.

Factors crucial to the success of the program were favorable: generous donations from sponsors, logistical support from volunteers, presence of talented artists, an appreciative audience, and last but not least, the blessing of a beautiful sunny autumn day from heavens above. Notably, Shri Shakti Mandir donated food for about 2000 people, many other businesses and individuals contributed cash or prizes for raffles and other necessary items, and energetic students from Sigma Phi Epsilon at Georgia Tech provided much needed help in setup and in ferrying heavy food items, taking time off their busy weekend.

Video:
US Congresswoman Tulsi Gabbard's 2013 Diwali greeting
Published on Nov 4, 2013
I'm Tulsi Gabbard. I'm honored to send you my warmest aloha and wish you and your family a Happy Diwali....