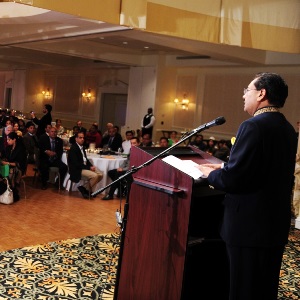 The Indian Consulate in Atlanta once again observed and celebrated India’s Republic Day amidst friends and community members with great fanfare. With U.S. President Obama’s 2nd visit to India, this time as the Chief Guest of Prime Minister Narendra Modi, this Republic Day brought a lot of excitement. Huge screens at the reception played recordings of the ceremony held in New Delhi with the two leaders sitting beside each other viewing the traditional grand parade showcasing India’s rich cultural heritage and military might, with PM Modi explaining the nuances to President Obama. It was awesome to see.

The beautiful Atlanta Athletic Club was abuzz with people until emcee Rifka Mayani began the program, inviting IACA Miss Georgia Anu Romesh on stage to sing both the Indian and the American national anthems, which she performed to resounding applause. Two Kathak students of the Nritya Natya Kala Bharti Dance Academy performed the Rajasthani folkdance, ghumar. 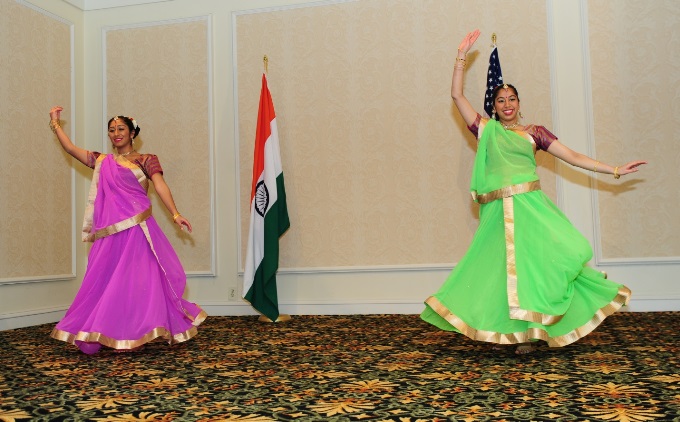 Ambassador Ajit Kumar, Consul General of India for the Southeastern USA then welcomed all on behalf of his wife Mrs. Margret Kumar and the Indian Consulate in Atlanta. Attending and welcomed were the Dean of Atlanta Consular Corps Mr. Paul Gleeson, and Consul Generals Dennis Barbet of France, Kazuo Sunaga of Japan, Gandy Thomas of Haiti, and others.

CG Kumar spoke of the founding of the Indian republic. He quoted President of India Pranab Mukherjee, from his address to the Indian nation: “The Indian Constitution is the holy book of democracy. It is a lodestar for the socio-economic transformation of an India whose civilization has celebrated pluralism, advocated tolerance, and promoted goodwill between diverse communities.”

Reflecting on President Obama’s remarks at the Republic Day Celebrations of “mera pyaar bhara namaskar” (my greetings are full of love), CG Kumar went on to state some of the outstanding trends that contribute to India’s rising GDP, mixing statistics with his genial humor. He quoted President Obama’s remarks about being natural partners and detailed the areas of progress [for details on CG Kumar’s speech, see Website Bonus Feature]. 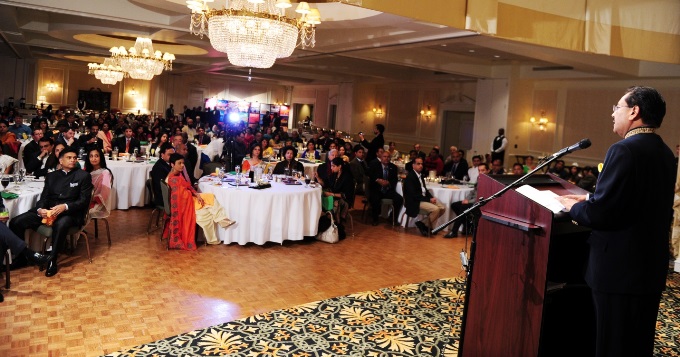 The gathering at the Republic Day reception on January 26, 2015 at the Atlanta Athletic Club learns that Ambassador Ajit Kumar, Consul General of India, Atlanta, will soon be posted elsewhere. (Photo: ByteGraph)

CG Kumar closed his remarks with an emotional farewell. “I would like to pay my tribute to the Indian-American community, especially in Atlanta. I came to Atlanta 3 ½ year ago and fulfilled my mission of opening the first Consulate of India in Atlanta and also continuing our increasing consular and commercial services. As this would my last celebration of Republic Day in Atlanta, I wish to thank all friends and leaders of community who have assisted the Consulate in taking the India-US relationship forward. My family and I have enjoyed the Southern hospitality.”

Samta Savla, co-instructor and Kathak dancer of NNKB, presented Kathak fusion as a solo item to huge applause. Harsha Agadi, Chief Executive Officer of Quiznos, gave a vote of thanks, repeating the sentiments that the staff of the Consulate led by the Kumar family has made a significant impact on the lives of Atlanta Indian-Americans. The Kumar’s openness and friendliness with everyone make us all proud of the Indian Diplomatic Mission in Atlanta. He added that he was pleasantly surprised on learning that Kumar’s father was a part of the group involved in drafting India’s Constitution and that it is no surprise that “the apple did not fall far from the tree.” “We all will miss you dearly,” he said, “and hope that you will come back and revisit us in the very near future.” A standing ovation was given by all attendees with heartfelt applause. A delicious buffet dinner from Bhojanic restaurant was enjoyed by all, though all felt the tug at the heart for a wonderful diplomatic family and their endeavors in setting up the right expectations and an awesome Consulate for Atlanta. 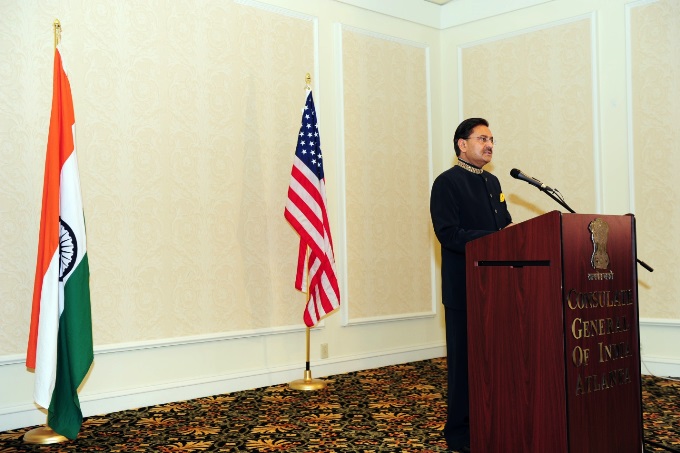 Consul General Ajit Kumar’s speech, excerpts:
“65 years ago, on the 26th January 1950, our Republic was founded on the selflessness and the vision of those who fought and won our freedom. Foremost among them was the Father of Indian Nation Mahatma Gandhi, who led a nonviolent freedom struggle to liberate our motherland. We adopted our charter of modernity, the Constitution in 1950 that has made India a role model for today’s world, which was constructed out of his philosophy. My father, as member of the Constituent Assembly also contributed to the Constitution of India.”

In the past 65 years, one of the major achievements of independent India has been its evolution as the world’s largest democracy. It is very vibrant and also quite noisy. There is no precedent in the world of a democracy of more than a billion people. Furthermore India has taken large strides on the road to development. India is the third largest economy in the world based on purchasing power parity basis. Its GDP growth in the last decade has been around 7.8%, making India among the fastest growing major economies in the world. In last two quarters, growth has been around 5.5%. In fact, IMF and World Bank have predicted that India’s GDP growth would overtake China in 2016 and 2017.

India is an ancient civilization but a young nation, as nearly 50% of its population is below the age of 25. This is one of India’s biggest strengths and enormous source of dynamism for years to come and India has to reap the demographic dividend. Thanks to the Green Revolution for which India is grateful to US Nobel Laureate Dr. Norman Borlaug, India is one of the biggest food producers in the world and the largest exporter of rice and the second largest exporter of wheat in the world.

Finally, after sending a spacecraft to the moon, India sent its Mars orbiter and became the first country to succeed in its first attempt to send a spacecraft to Mars, which was at the cost of less than the Hollywood movie Gravity.

“As two great democracies, two innovative economies, two societies dedicated to the empowerment of our people including millions of Indian Americans, we are natural partners. When I addressed your Parliament on my last visit, I laid out my vision for how India and United States could build a defining partnership for the 21st century. Since then we’ve made significant progress. Our trade has increased; our militaries exercise together more for cooperating on key global challenges from nuclear proliferation to global health.” He added that President Obama reiterated support to include India as a Permanent Member on the UN Security Council. He thanked India for being a leading contributor to the UN peacekeeping missions for many years. He welcomed India’s leadership in combating diseases and promoting global health, the advances to the rights and dignity of citizens around the world.

Trade between India and US in last few years has increased by some 60% to $ 100 billion; both countries established a number of effective bilateral mechanisms to identify opportunities and help their business trade and for more investments.