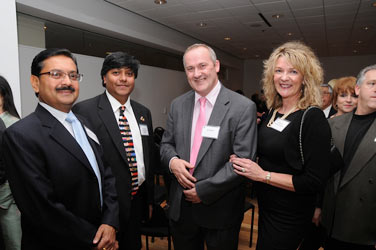 Having just bought a house in close quarters of the Governor’s Mansion, Hon. Ajit Kumar is actively seeking a property for the Consulate. However, that does not detract him from filling his dossier with a rolodex of who’s who in the international elite in the Southeast. On February 2, 2012 he attended the World Chamber of Commerce’s International Hero Awards at the Woodruff Arts Center, Atlanta, as a guest of Viren Mayani, a former executive director of the Asia region of WCC.

The consul was warmly received by the WCC founder and international trade activist from Chile, Ms. Solange Warner. Mayor Kasim Reed and Noah Downer, Atlanta’s International Affairs Liaison, both offered their support. Since Mayor Reed declared interest in visiting China at the gathering, Dr. Helene Gayle, President & CEO of CARE USA shared memories of her Indian visit and suggested that he should visit India as well. Mayor Reed stressed his interest and that he would do his best to include that visit during his tenure.

The keynote address for the evening was delivered by President of Colombia, Alvaro Uribe, who significantly changed the country from a drug haven to a place of nationalist pride. Also present were British Consul General Annabelle Malins; Consul of Denmark, Christopher Smith; U.S. Ambassador Charles Shapiro; Dean of the Consular Corps of Georgia/Consul General of Germany, Lutz Gorgens; Mark Becker, President of Georgia State University; Phil Bolton, Publisher of Global Atlanta; Director of the Rialto Center Leslie Gordon; Attorney Charles Kuck; WCC Board Member and founder of the Brazilian American Chamber of Commerce Lucia Jennings, and others.

Ambassador Andrew Young spoke of the vision Mayor Hartsfield had for the Atlanta Airport and how it has become a U.S. destination, and of President Jimmy Carter who signed a trade deal with Panama for the Georgia Ports Authority, when the nation thought differently. Today it is only the Georgia Ports Authority that is in a position to accept the largest vessel that passes through the Panama Canal. Ambassador Young is scheduled to be in Bangalore, India, in the next few weeks with a UN mission. He asked what else he could do and who should he meet when in Bangalore and was advised to spend time with Narayan Murthy of Infosys, the basis of inspiration for Thomas Friedman’s book, The World is Flat.

The World Chamber of Commerce event provided an opportunity to generate international trade awareness to stimulate economic development, and to promote humanitarian projects. Part of the event’s revenue will be donated to CARE, assisting children victims of modern slavery.
=================

History: The Orly Air Crash of 1962, or The Day Atlanta Stood Still
This historic crash was mentioned by Ambassador Young in his speech at the WCC event.
http://www.georgiaencyclopedia.org/nge/Article.jsp?id=h-1103
http://www.gpb.org/day-atlanta-stood-still (includes video)

Videos:
At http://www.globalmatters.tv/ you can meet some of these international dignitaries: