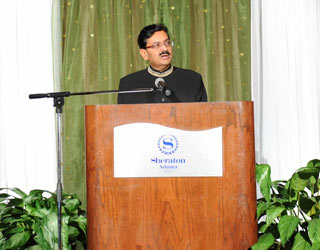 A mixture of Indian-Americans and Americans from Atlanta’s organizations, companies, and government were invited to the Sheraton-Atlanta on January 26, 2012 for Consul General Ajit Kumar’s Republic Day Reception.

“Today India celebrated its 63rd Republic Day with a traditional grand parade in New Delhi, showcasing its rich cultural heritage and its defense capabilities,” the consul began. “Twenty-six January is a very significant day in our nation’s calendar when we celebrate the establishment of free India as a republic based on the ideology of justice and equality.

“My late father had the privilege of being a member of the Constituent Assembly which adopted the Constitution of India, which is the foundation of the world’s largest democracy. Dr. Babasaheb Ambedkar, who was considered one of the main architects of the Indian constitution, had stated at his closing speech of the Constituent Assembly, ‘The first thing in my judgment we must do is to hold fast to constitutional methods of achieving our social and economic objectives.’ I must add that the Indian Constitution also derives inspiration from the American Constitution.

“One of our remarkable accomplishments has been adherence to democracy. People of India have expressed a confidence by participating time and again in electoral process which is the largest democratic exercise in the world. Next month [February] we are going to have elections in one of the states where the electorate is only 200 million people! [Uttar Pradesh]

“In more than six decades India has taken large strides on the road to development. India today is the 2nd fastest growing economy in the world and the 4th largest.”

The consul reviewed the growth rate of India’s economy and spoke of the population of over a billion as a great resource. With “nearly 50% of its population below the age of 25 years,” India is strong and dynamic. “By 2040 many analysts have predicted that it could be the 3rd biggest economy in the world. However, there is tremendous work to be done … to achieve vast and inclusive sustainable growth.”

The consul quoted from an address the day before by the President of India Pratibha Patil, about India’s global role and the contributions of the Indian diaspora to the economic, professional and political fields of the countries where they live.

The expanding cooperation with India and the U.S. is partly based on “excellent people-to-people contact.” Dialogue initiated in 2009 identified principal areas of expanding cooperation: strategic cooperation, energy and climate change, education and development, economic trade and agriculture, science and technology, health and innovation. “In India we regard the U.S. as our most important partner in quests for social and economic development…. Two-way trade in goods continues to grow steadily reaching about 49 billion dollars last year.”

“In order to continue on our high-growth path India will need to invest in building a world-class infrastructure that will … insure the availability of abundant supplies of clean sources of energy, … [and] more schools. …

“Our military, once unfamiliar with each other, now hold regular dialogue and joint exercises in the air and on land and sea. Our defense training was negligible about a decade ago but … it is bound to grow … as India looks to modernize its armed forces. 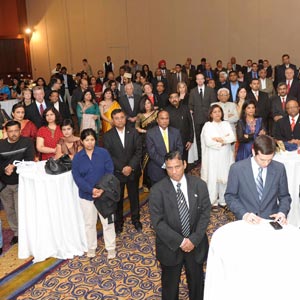 “We welcome the Obama endorsement of India’s candidacy for permanent membership in the UN Security Council. This is an acknowledgement of the growing role of India on the global stage and a reassertion of our shared beliefs that India-U.S. relations are a key strategy for partnership of the 21st century.

“This is just a broad glimpse of our engagement on regional and global levels with the U.S. …

“The nearly 3 million strong Indian-American community has also come of age and plays a vital role in expanding numerous connections which make our relations people-centric. …

The consul saluted “the dynamic Indian-American community of Georgia. … I have managed to reach and address nearly all major community associations in the last few months I have been in greater Atlanta. Priority will be given to the security and welfare of Indian residents by the consulate as well as the importance of engagement with the community leaders in order to better serve the nonresident community.”

After thanks and the national anthems, guests could speak to the consul, eat, and mingle, making further people-to-people connections and new ties to strengthen our bonds and promote our two countries’ development.

For more on President Patil's speech, including both global role and internal reform plans, see

Full Text:  SPEECH BY HER EXCELLENCY THE PRESIDENT OF INDIA SHRIMATI PRATIBHA DEVISINGH PATIL TO THE NATION ON THE EVE OF REPUBLIC DAY -- January 25, 2012