Cricket and Service: A Perfect Duo 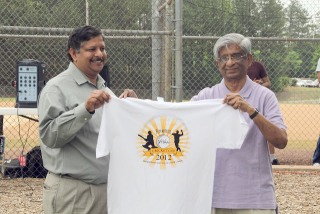 Left: Inauguration of the event with Sravan Vellanki, President & CEO of FutureTech, and E.S. Ramamurthy, Founder of Sikshana, a child welfare project.

It was a beautiful day for cricket on April 21st, the pitch-off for Vibha’s flagship event, the FutureTech Vibha Cricket Cup 2012. Slight drizzles soon changed to an afternoon filled with intensity and cheers for the teams at East Roswell Park, without whose support and generosity this memorable and benevolent endeavor would not have been possible.

After the inauguration speech from chief guest Mr. E.S. Ramamurthy, founder of Sikshana (a Vibha supported child welfare project), came a big surprise announcement from FutureTech. On the occasion of a decade long partnership with Vibha Cricket tournament, Mr. Sravan Vellanki, President and CEO of FutureTech, announced that they were doubling their title sponsorship this year from $5,000 to $10,000 and thus granting Vibha $50,000 over five years. This high note was added to by the unveiling of special as well as tournament t-shirts, including uniforms signed by Indian cricket great, Mr. Sunil Gavaskar.

The tournament was not only an excellent getaway for many families wishing for more physical activity to improve their hectic days, but also a huge event for the support of child social development. Coordinators Mr. Rama Rayali, Mr. Sreeni Baddam, and Mr. Venu Rykal and scores of volunteers worked to made this fundraiser successful. As Mr. Rayali said, “We are all proud to be part of a cause that combines both our passion for the game... and supporting children and we strive to make an impact through Vibha.”

Social networking led to a record 50 teams signing up, each with nine players. There were also activities for all age groups, including coaching for children on certain days, free of cost and providing basics on the historic game.

A distinct aspect of this year’s tournament was the creation of a one-of-a-kind rolling trophy, resulting in a Cup unique to 2012: winners of the past thirteen years were engraved on the new trophy, named the Dream Cup, with the winner of this year’s tournament imprinted also. The Dream Cup thus not only represented the game of cricket, but also the values of giving back to the community and the world.

Preliminary rounds were hotly contested on April 21st and April 28th. A record 16 matches were played on the first day of the tournament. Fans flocked to see their teams win, and children had a great time, too.

Much talent was exhibited, but the quarterfinals could only accept eight teams of the initial fifty. The four intense matches included a playoff between the Paramount GA Tigers and the Blue Panthers, resulting in victory for the Paramount GA Tigers. FutureTech (sponsors) won against the Palatial Dragons in another enthralling game. The final two quarterfinals were won by the Blazers and Rapid IT Royals against Rebels United and the Phoenix Cricket Club, respectively, and both matches showing both fair play and the spirit of good competitiveness.

The matches played in the semifinals were some of the best. The first winner was the Rapid IT Royals over the Paramount GA Tigers. Batting first, Rapid IT Royals made 47 runs with a good knock by Vijay, even in the face of a good bowling effort by Paramount. Chasing 48 runs to win, Paramount GA Tigers only managed to make 41 runs in 10 overs, due to tight bowling and fielding effort by the Rapids—commendable efforts by both teams. In the second semifinal, the Blazers were pitted against FutureTech. A thrilling last ball by the Blazers resulted in their advancement to the finals even in the face of some laudable effort by FutureTech through a stiff batting target and bowlers sticking to a plan. Chasing 68 runs to win the tie, Blazers needed seven runs in the last two balls of the match. The penultimate ball was hit for a beautiful six to level the scores. With one run needed, Blazers hit the last ball for a single to win the thriller and thus set the stage for a nail-biting grand finale.

Winners of the tournament, the Rapid IT Royals.

The final was exhilarating, with record spectator attendance and intense support. The first ball was bowled by the Blazers to the Rapid IT Royals, with the team making 62 runs in 10 overs, setting an uphill task for the Blazers. Captain Sanjeev made a classy knock, leading the way through a match high score of 34 runs to become highest scorer of the tournament. The Blazers were determined but lost all their wickets for 34 runs. The Rapids won by 28 runs, on a day when they seemed to do nothing wrong, and were crowned champions.

At the final ceremony, the first medals were presented to the Blazers as runners-up by Mr. Pramod Sajja, President of Paramount Software. A plethora of awards went to the winning team, the Rapid IT Royals, including winner trophies presented by Mr. Anj from FutureTech, Winners Cup by Mr. Sravan Vellanki, President of FutureTech, and the rolling Dream Cup trophy.

The 14th annual FutureTech Vibha Cricket Cup was a huge success, increasing help for schooling for poor children in India and for American children’s fundraisers.