Delegates from Gandhigram, India pay homage to the Gandhi-King legacy 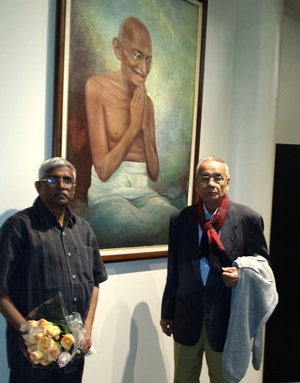 Dr. Vicki Crawford, Executive Director of the Collection, gave an overview of the 10,000 pieces, the largest repository of primary source materials on King and the American Civil Rights Movement. Included are papers of King and the organization he co-founded, the Southern Christian Leadership Conference (SCLC), also records of 8 civil rights organizations and several individuals active in the Movement. There are also more than 200 oral interviews with King’s teachers, friends, family, and associates. Dr. Crawford thanked GFUSA for raising funds at a banquet at the Palace Indian restaurant at the behest of the former Mayor of Atlanta, Shirley Franklin, in the Summer of 2007.

Mr. Oza spoke of a proposed Memorandum of Understanding between the Gandhi-King Center/Gandhigram Trust of Gandhigram Rural Institute (GRI) and the GFUSA. Dr. Crawford discussed possibilities of exchange programs between GRI, GFUSA, and the Morehouse King Collection.

The visiting delegates and GFUSA officials met Dr. L. E. Carter, Dean of Religion and Founder, Gandhi King Ikeda Institute of Global Ethics at the MLK Jr. International Chapel at Morehouse. They next met Dr. Gregory Hall, Chair, Dept. of Political Science, Morehouse College, who suggested that a proposal for collaboration be developed. He stated the need to develop studies at Morehouse College on Gandhi/King nonviolent strategies.

A working dinner for the visitors at the residence of hosts Subash and Raj Razdan was graced by many VIPs, including Dr. King’s nephew, Hon. Isaac Farris; National Park Service Superintendent Judy Forte; Hon. Greg Pridgeon, former Council Member and Chief of Staff of the City of Atlanta; Hon. R. Srinivasan, Acting Consul General of India in Atlanta; Ms. Ray Ann Kremer and Mr. George Shapiro of the AJC (Ms. Kremer supported and attended the dedication of the Gandhi Statue in 1997 on behalf of the American Jewish Community); Mr. Mohsin, Treasurer of GFUSA; and many leaders from the Indian community. Mr. Oza made a power point presentation on the Gandhi-King Center of GRI and its plans. Dr. Ragupathy explained the significance of the Gandhi/King message to future generations. Hon. Srinivasan appreciated the joint efforts of GFUSA and GRI and assured them of support from the Consulate.

Gandhigram in India, founded with the blessings of Mahatma Gandhi by two of his close disciples in 1947, is a national center for Gandhian activities. It consists of three institutions: Gandhigram Trust, Gandhigram Rural University (GRU) and Gandhigram Institute of Rural Health and Family Welfare.

In 1959 MLK Jr. and Mrs. Coretta Scott King visited Gandhigram to study the Gandhian strategies of nonviolent social transformation. It was during their tour of India that King had remarked in Delhi (on Feb. 10), “To other countries I may go as a tourist, but to India I come as a pilgrim.”

More than 50 years after King’s visit to Gandhigram, Razdan visited in 2014 as a guest speaker for a seminar on “Lincoln, Gandhi, and King.” An idea to commemorate King's visit to Gandhigram through a permanent program was discussed. Prof. Ragupathy had been a guest of GFUSA earlier on June 16, 2012 at GFUSA’s Ekatva concert in Atlanta in a joint-venture with an NGO of Ahmedabad for children’s education in Gujarat. On the initiative of Oza and Ragupathy, encouraged by Razdan, the Gandhigram Trust agreed to start Gandhi-King Center for Peace and Justice, inaugurated on July 11, 2014, to spread the message especially among the younger generation.

GFUSA and Bernice King, CEO of Atlanta’s King Center, have voiced support for the Center there. Razdan visited Gandhigram again in February 2015. GRI may now “create a befitting Memorial for Dr. King in India,” remarked Prof. Ragupathy. “The possibility of [teaching]… may soon be a reality. This visit by the two of us from Gandhigram, India is expected to put on a firm footing the planned collaboration of socio-welfare education between Gandhigram, GFUSA and allied partners such as Morehouse College, Emory University, and even Ivy League colleges in USA,” added Oza.

The visitors were recognized in the packed auditorium of Freedom Hall with a standing ovation. Razdan acknowledged the friendship that Mrs. King always had for the Indian-American community and for her inspiration to refurbish the Gandhi Room in Freedom Hall in 1987, the Gandhi Room at the Indian American Religious and Cultural Center (ICRC) in Smyrna in 1995, and for her support for the Gandhi Statue in 1998. “Our deep admiration for the King and the Farris families thus is natural. Late Mrs. Coretta Scott King is a huge inspiration to many worldwide,” added Razdan.

As Congressman John Lewis and a fellow Civil Rights leader of MLK Jr. proclaimed just one day after her death on Jan 31, 2006 at the Service attended by global leaders and three former US presidents (Carter, Bush Sr., and Clinton), “Coretta Scott King institutionalized Martin’s memory for generations to come—and so it’s not just memory, but also his method and message. She must be remembered, in my estimation, as one of the founding mothers.”

Earlier (on April 22, 2015) Oza also attended the funeral/memorial service of the late Mrs. Eva Galambos, Mayor of Sandy Springs. Mayor Galambos, a genuine friend of the Indian American community, worked tirelessly and successfully along with India’s former Ambassador to USA, Ronen Sen and Subash Razdan to ensure that the first Consulate General of India (CGI) would be in her city of Sandy Springs.

On April 23, the visitors garlanded the Gandhi Statue, metSuperintendent of the National Park Service (NPS) Judy Forte, and her staff, ‘Peace Walked’ through the Visitor Center Museum and Ebenezer Baptist Church, and laid wreaths at the King crypts. They saw the Gandhi Room in Freedom Hall, which was refurbished by the Indian American Cultural Association in 1987 with the help of Mrs. King, the Embassy of India, and financial support from the medical doctors, Sood, Radhakrishan Vanapalli, and Naidu, and other community members. The Walk ended at Dr. King’s birth home on Auburn Avenue.

Prof. Ragupathy and Vice Chancellor Oza jointly thanked GFUSA. “Gandhi’s life and his achievements inspired Dr. King to say, ‘Gandhi was inevitable. If humanity is to progress, Gandhi is inescapable…we may ignore him at our own risk.’ On the other hand, Dr. King’s engagement in civil disobedience and the protest movements for civil rights and human rights are historic. Dr. King’s leadership, unquestionably, reshaped the racial landscape in the entire continents of North and South America. The message and methods of Gandhi and King must reach the masses, especially the youths of the globe. They must understand that in highly pluralistic societies like India, USA and elsewhere, only nonviolence negotiations and mutuality can help with conflict resolution. The Gandhi King Center at Gandhigram shall strive to become a pioneering ‘Peace and Justice’ non-profit organization (NGO) in India,” reiterated the officials of GFUSA and Gandhigram in a joint statement.

[Photos will be added later today.] ​