COVID-19  In-depth info for Indians in Atlanta/Georgia. Click here
Home > Magazine > Around Town > Devi Mahamaya: journey into a world of conflict and enlightenment

Devi Mahamaya: journey into a world of conflict and enlightenment 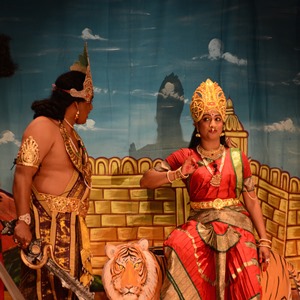 As an eager audience member filing into a packed Hindu Temple of Atlanta auditorium on May 28, 2016, I was certain of two things: a special awareness of the capabilities of the “Devi Mahamaya” production team and the knowledge that, unlike most Indian programs, this event would begin and end on schedule. What I was going to witness was a significant effort, the promise of live music on the side melding with the dialogues of multiple characters on stage. What followed was a delightful fulfillment of that promise. After the introductions, the serene singing voices in Sanskrit (directed by Srini Kishore) filled the room, quickly dwarfing everything else, setting us off on a unique journey into the world of conflict and enlightenment.

Laced with live music, every scene had a story to tell, a point for us to chew on. We learned how Vishnu, Brahma, and Shiva heaped praise on Gayatri, the Veda Maata, through the stotra, JataVedase; how the title Madhu Sudan was bestowed on Vishnu by Devi; how Nahusha’s pride and lust got the better of him and eventually robbed him of life; how Devi became Mahishasura Mardhini after slaying the dreaded Mahishasur; how Devi created Kali from her kaajal and tasked her with extinguishing evil.

At the core of the scenes was an unmistakable theme: the imbalance that pervades us when we harbor krodha (anger), lobha (greed), moha (attachment), kama (lust), mada (pride), and matsarya (envy) can smother the essence of the world we live in, and may need divine intervention to nudge the equilibrium back into place. This message was illustrated in glorious form by the actions of egotistic kings and their demands, tamed by confident, restrained women who, when compelled, mutated into graceful yet fiery warriors that quelled violent advances and vile intent.

The verbal exchanges on stage between the wicked-looking Asuras and the calm-demeanored Devas had humor, hubris, and resolution. Around nineteen microphones were being rotated among the cast members, and this mammoth interplay was escalated to even grander exhibition as the Devis in gorgeous costumes took center stage, every one of them striking in their elaborate make-up, steely resolve in their eyes, and the graceful dancing (choreographed by Padmaja Kelam). Narender Reddy, a witness to this powerful display, was impressed: “Despite the limitations in stage space and lighting, the play was superbly presented,” he exclaimed. “I've been to many shows by Syam [Yellamraju], but this definitely stands at the top.”

Every step on stage had to be in synch with the rhythm of live singing, and this harmony, on most occasions, was “a feast for our eyes” as Shobha Swamy, a member of the audience, aptly put it. “The show kept adults and children alike enthralled until the very end,” said Shobha, “kindling our interest to learn more about Devi Mahamaya in our scriptures.”

When the curtains finally fell on the last scene, the impact of Bhavani Ashtakam still lingering within the temple walls, the last of the Asuras vanquished, the audience rose, some folks standing all the way to the back, to applaud the efforts, not just of the main characters who shone brightly, but of every voice that sang with verve and devotion, every voice that passionately mouthed the lines—and every voice that didn’t speak but had a role to play onstage or backstage. As spectators trooped out, the “Devi Mahamaya” crew (including 30 actors, 15 orchestra members, and 10 in production) was gratefully taking in the accolades but mentally taking notes: they had another giant crowd to enthrall next weekend in Tallahassee, Florida. 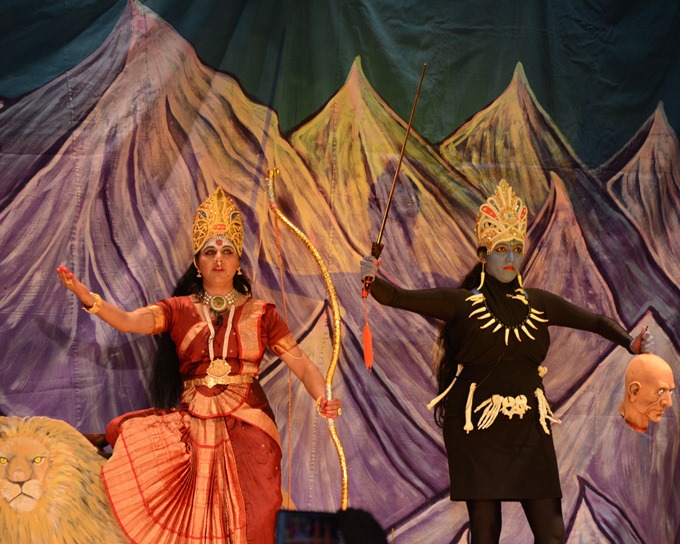 Video:
‎Srinivasa Bharadwaj Kishore‎ to "Devi Maha Maya" - mythological play in English
Published on May 29, 2016
This video is intended to serve as a trailer for the upcoming musical play "dEvi mahAmAya" to be staged in Tallahassee on Saturday June'04, 2016 at 2:00 PM, in Lee Hall Auditorium, Tallahassee, FL.
https://youtu.be/CRgpj_yszZI

Facebook post:
Hindu Temple of Tallahassee is organizing "Devi Maha Maya", a musical mythological play in English based stories from "Devi Bhagavatam" with the central idea that the supreme takes feminine form to protect the devotees and to destroy the evil. This play is by Atlanta based group which has credit of having staged over 25 mythological and historical plays to broadway show standards with phenomenal music and choreography, costumes, stage props and actors.
Tallahassee needs to be proud of this event since the music for this play is composed and live orchestra is conducted by a Tallahassee resident.
This event, an HTT fundraiser is on Saturday, June'04, 2016 at 2:00 PM, in Lee Auditorium, FAMU.
https://www.facebook.com/events/1082945678431929/#

Photo Gallery (Tallahassee)
Taken at FAMU Lee Hall Auditorium, by Bob O'Lary: “I photographed a theatre performance by the Hindu Temple of Tallahassee this afternoon named "Devi Mahamaya". Amazing and enjoyable cultural experience for me. Music was excellent, and the acting & singling really moved me. Costumes and staging were superb, and I was truly caught up in the story. I had an absolute BLAST seeing & photographing this theatrical tour de force!”
Presented by the Hindu Temple of Tallahassee, Florida June 4th, 2016
https://www.facebook.com/bob.olary/media_set?set=a.1354562861225565.1073742244.100000155912523&type=3